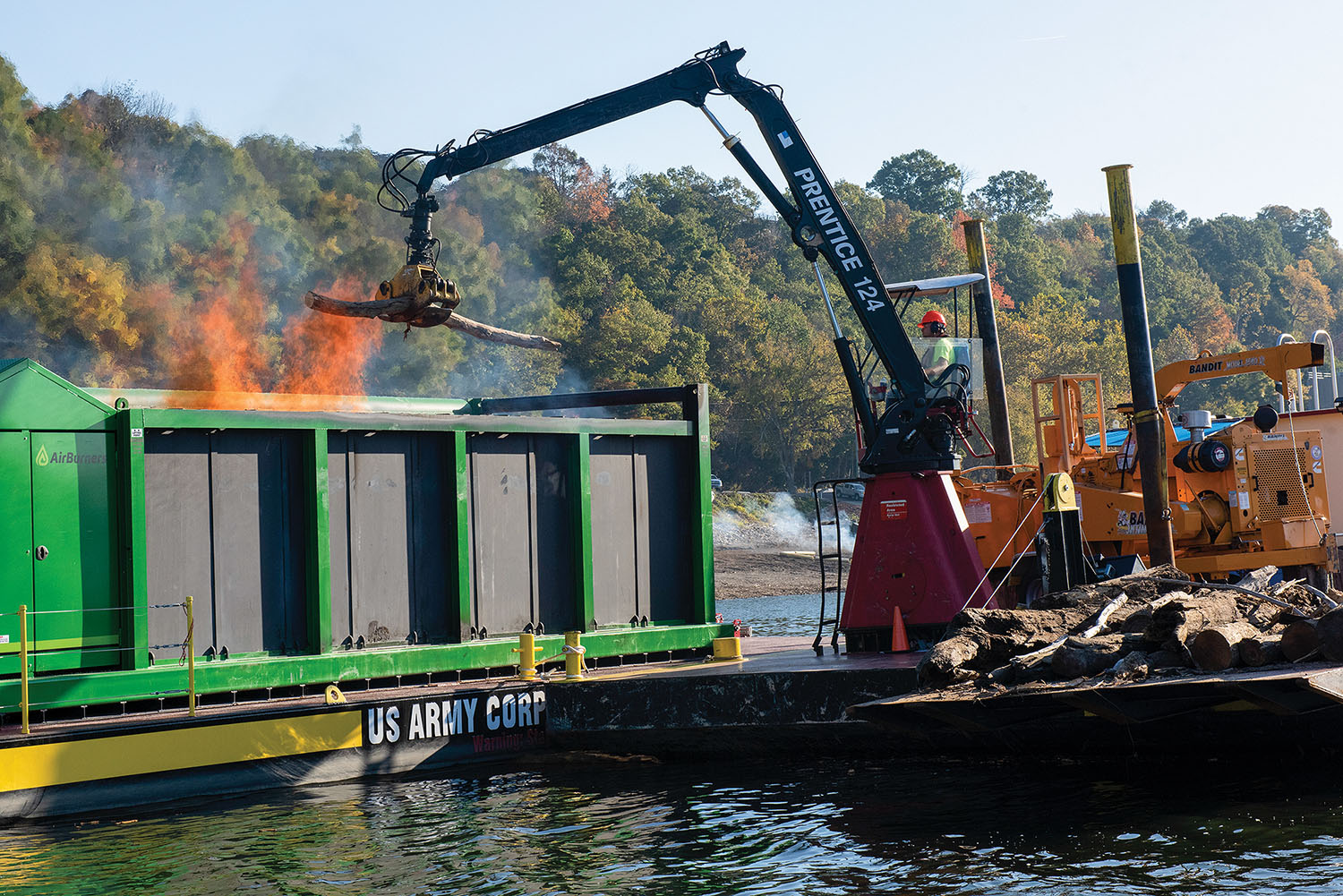 A new floating barge equipped with a special incinerator is helping the Nashville Engineer District to efficiently dispose of stumps, logs and driftwood debris.

The incinerator barge began operating in October on Lake Cumberland, a reservoir of the Cumberland River in south central Kentucky, Nashville district public affairs specialist Lee Roberts said. It is equipped with an air curtain burner into which deckhands feed driftwood.

“We can burn anything that we can physically lift and put in there,” said Christian Stringer, master tender of the PRIDE of the Cumberland, the vessel that picks up debris and now moves the barge with the incinerator around.

The new system allows Stringer’s team to burn the debris instantly instead of chipping up wood and leaving it on the shoreline. Larger logs and stumps that couldn’t be fed into the chipper had previously been transported and burned at Lakeview on one end of the lake, which meant the team spent a lot of time moving  debris that can now be incinerated right on the floating barge. The Corps also takes advantage of environmental benefits as the new air curtain burner burns much hotter than a regular fire, incinerating debris much faster and with less smoke.

The average shoreline debris pile is between 40 and 60 yards, Roberts said, which used to take two to four days to burn, depending on the dampness of the wood.

“We just put in roughly 30 yards (into the air curtain burner), and it will be gone in the next hour,” Stringer said. “Once it is hot you can put anything straight out of the lake in it, and it will burn it.”

North Shore Marine Terminal & Logistics of Escanaba, Mich., built and recently delivered the new 16-foot wide, 60-foot long and five-foot tall barge to Corps staff at Lake Cumberland. The air curtain burner, manufactured by Air Burner, can process up to 10 tons of material per hour. By having it stationed on the new barge, the Corps of Engineers can keep the smoke and ash away from recreation areas and shorelines.

“So many people swim in the lake, eat the fish out of the lake,” Friedman said. “We want to do whatever we can to keep the water clean. By removing debris off of the water, it is a safety benefit so people can avoid striking whatever might be floating in the water.”

Friedman said it is a nonstop mission to remove debris because every storm carries more into the lake from upstream.In 1997, U.S. Rep. Hal Rogers (R-Ky.) started an initiative called Personal Responsibility In a Desirable Environment (PRIDE), a non-profit designed to educate and implement programs aimed at improving the environment in eastern Kentucky.

The PRIDE initiative led to funding and delivery of the PRIDE of the Cumberland in 2004 as a debris-cleaning vessel for 63,000 surface acres of water and 1,255 miles of wooded shoreline. In fiscal year 2020, the Corps received appropriations for the new floating barge and air curtain burner.

Jesse Neal, who has lived in the area all his life, said he gets satisfaction working as the PRIDE of the Cumberland’s lead operator because he wants to remove objects floating in the lake that could possibly harm friends and family who visit and recreate.

“Wood in the water can tear motors off boats,” he said. “It does feel good being able to clean up everything, making it nice (for people on the lake). We’re just here to make Lake Cumberland a lot cleaner.”

Neal explained that he tries to grab moderate-sized loads of debris with the grapple crane he operates to keep loose pieces from falling back into the lake or onto the barge, where it could hurt Mark Calhoun or Michael Traxtle, the deckhands that round out the team.

Chris Girdler, president and CEO of Somerset Pulaski Economic Development Authority, said he’s excited to have the burner operating both because it means clean water and because it enhances the ability of citizens and visitors to access Lake Cumberland’s resources.

“With the fluctuations that our lake sees, the Corps of Engineers with the PRIDE of the Cumberland and the new barge and burner are making an extraordinary commitment to doing all that they can to clean up this lake, this environment and everything else that goes along with it,” Girdler said.

He added that the lake welcomes millions of visitors a year, and the Corps of Engineers is a tremendous community partner that plays a large role in welcoming those visitors.

Caption for photo: Lead Operator Jesse Neal operates the grapple crane on the PRIDE of the Cumberland, placing debris into an air curtain burner on a new floating barge in Lake Cumberland near Waitsboro Recreation Area in Somerset, Ky. (Photo by Lee Roberts, Nashville Engineer District)