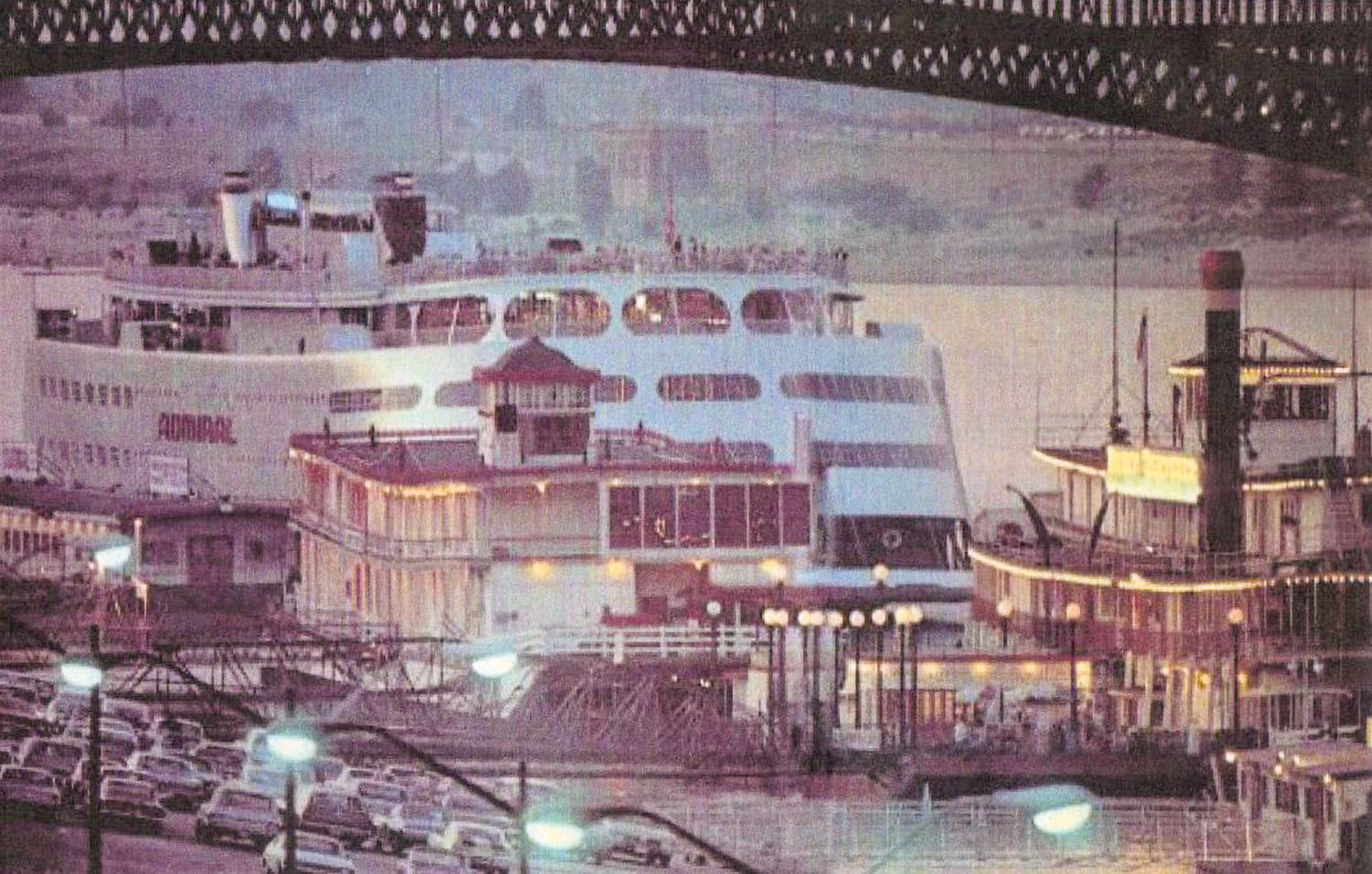 Twilight On The Levee

During this final week of 2020, the Old Boat Column takes a fond look back 50 years to the summer of 1970, when the St. Louis levee was still a lively place for both tourists and residents. Three of the riverboats that occupied the wharf for many years are now but nostalgic, happy memories to those who, like this writer, recall the days when the sounds of a steam calliope and ragtime music reverberated over the cobblestones.

In the shadow of the historic Eads Bridge (opened in 1874), at the foot of Washington Avenue, the excursion steamer Admiral was operated by Streckfus Steamers. Originally built at Dubuque, Iowa, in 1907 as the sidewheel railroad ferry Albatross, the boat operated at Vicksburg for the Louisiana & Mississippi Valley Transfer Company, carrying 16 railroad cars at a time.

Sold in 1937 to Streckfus, the boat’s superstructure was removed at St. Louis and rebuilt into the ultra-modern Admiral, carrying 4,000 passengers, largely air-conditioned and boasting many other amenities heretofore unheard of on excursion vessels. The steel hull was 374 feet in length by 94 feet in width.

During the winter of 1973–74, the propulsion was converted from steam to diesel, with the installation of three Murray-Tregurtha units,  that occupied the former paddlewheel boxes and one placed at the stern. The Admiral continued in operation until 1979, when serious hull problems permanently moored the revered riverboat. After stints as an entertainment and casino complex, the Admiral was towed downriver in 2011, where it was dismantled and scrapped.

Taking up permanent residence at St. Louis in the autumn of 1937, the Goldenrod Showboat offered melodrama, mirth and music for more than five decades. Built in 1909 at Parkersburg, W.Va., for Capt. W.R. Markle, the Goldenrod was the largest showboat ever built. Purchased by Capt. J.W. Menke in 1921, the floating theater, pushed by sternwheel towboats, extensively toured the Ohio and Mississippi River system.

On June 1, 1962, a devastating fire aboard the vessel caused extensive damage. Capt. Menke found the task of revitalizing his beloved boat too much to handle, so he sold it to Frank Pierson, a St. Louis advertising executive and river aficionado. With the aid of investors, the showboat was restored and reopened in 1965.

Sold to the city of St. Charles, Mo., the boat was moved to the Missouri River in 1990; it was remodeled into a dinner theatre and operated for the next decade until structural problems closed it down.

After another change in ownership, the boat ultimately ended up on the Illinois River near Kampsville. Virtually an abandoned derelict for a decade, a preservation group planned a restoration project. Due to severe buckling of the steel barge hull (installed in 1947), plans were canceled. All items of historical value, including the pilothouse, were removed to storage for future use in a proposed museum. The remains of the showboat were destroyed by fire on October 21, 2017.

Last, but not least, is the sternwheeler Becky Thatcher. Formerly the steamer Mississippi (third of the name) of the U.S. Army Corps of Engineers, the steamboat operated as a towboat and inspection boat for the Mississippi River Commission until 1961. Sold at auction in 1963, the riverboat became a tourist attraction at Hannibal, Mo., until acquired by Frank Pierson and taken to St. Louis in 1966. Renamed Becky Thatcher, the boat contained a restaurant, gift shop and the “Boiler Room Bar.”

A prime feature aboard the Becky on the main deck was the Midship Museum, designed and curated by beloved St. Louis river historian Ruth Ferris.

Sold at public auction in 1975, the boat was towed to Marietta, Ohio, where it became a showboat theater and restaurant, surviving a sinking in 1984. After being closed for several years, the Becky was towed to Pittsburgh in the late autumn of 2009. During severe winter weather in early 2010, the boat sank and was a total loss. The steel hull, built by the Howard Shipyard in 1926, remains submerged in the river at Neville Island.

Today, the Mississippi laps quietly over the largely empty levee, which once was a busy epicenter of much St. Louis river history.

Caption for top photo: Fifty years ago on the St. Louis levee, the excursion steamboat Admiral boards passengers for an evening cruise while the permanently moored Goldenrod Showboat and Str. Becky Thatcher light up the waterfront. (Keith Norrington collection)