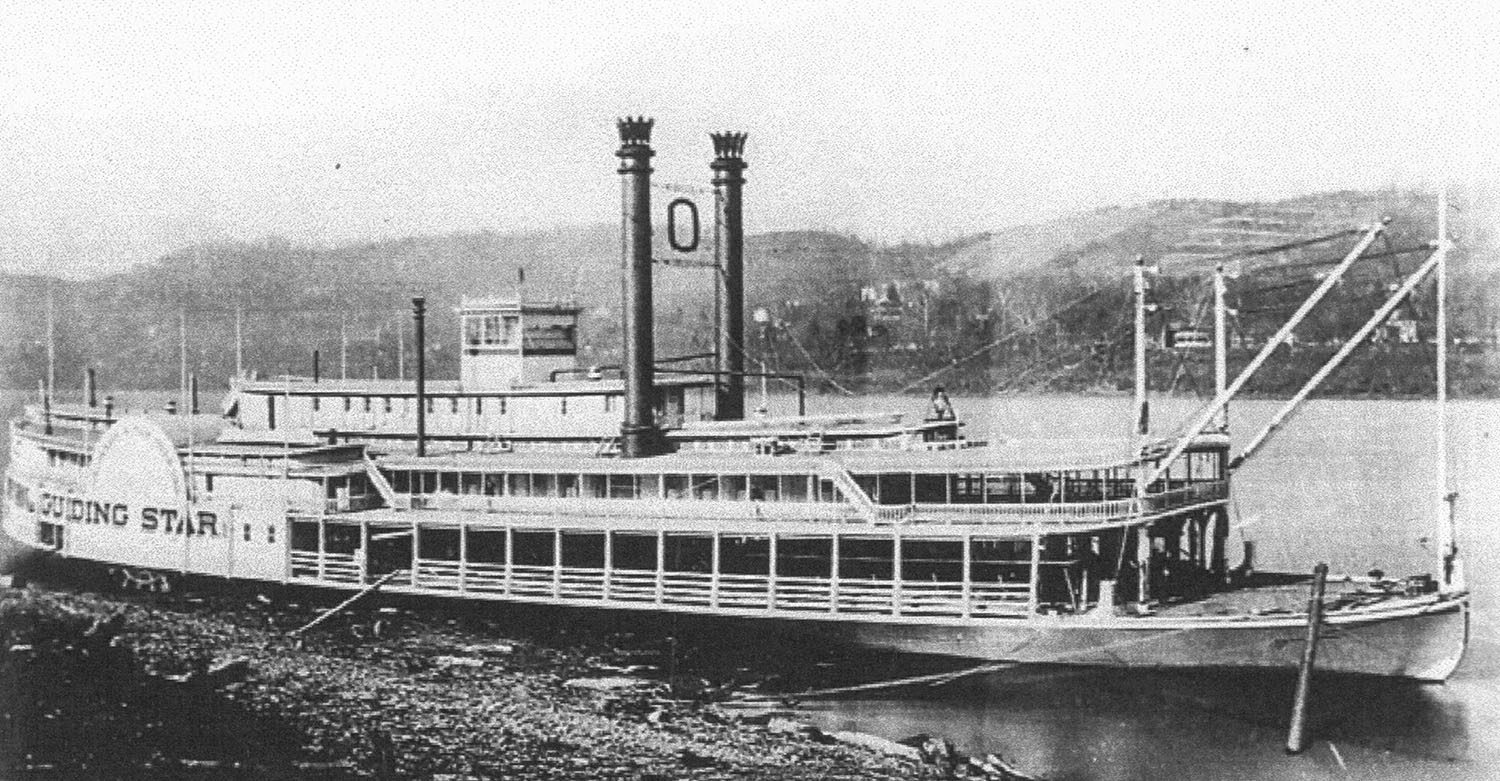 Happy New Year! We begin the Old Boat Column for 2021 with a steamboat that took its name from the star of Bethlehem.

The Guiding Star, a wood-hulled sidewheeler that was 300 feet in length by 41.5 feet in width, was built at Cincinnati, Ohio, in 1878. Five boilers supplied steam to engines that originally did service on the packet Robert Burns. This machinery was replaced in 1880 with larger engines, having 26-inch cylinders with an 8-foot stroke. The paddlewheels were 28 feet in diameter, working 14-foot bucket planks on 17 wheel arms.

The boiler deck of the boat was 60 feet wide in front, with guards running back 165 feet on each side. The ornate cabin, with 50 staterooms, was 235 feet long with black walnut and birds-eye maple finish. Colonel Thompson Dean selected the furniture from New York. The cabin deck also contained the office, bar, pantry and barber shop. The texas deck was 108 feet long, with the captain’s room (16 by 16) in front. At the after end of this deck were the crew quarters. The pilothouse was 14-foot square.

The smokestacks rose 85 feet from the light-load line. The roof bell, cast by the Vanduzen foundry, weighed 1,800 pounds.

The Guiding Star came out new in the Cincinnati–New Orleans trade, with Capt. William Bainbridge Miller as owner and master. Other crew members were Capt. Charles Owens and Capt. George Melona, pilots; Thomas Henry and Henry Myers, engineers; and John Jones, clerk. Capt. Miller had served on the Ohio and Mississippi for a quarter century without being involved in a sinking or explosion, tantamount to a miracle for those times, and felt strongly that he had been born under the influence of a propitious star. Miller was a college graduate, well versed in Greek and Latin, and was a native of Austinburg, Ohio, where he served as the town postmaster. Desiring a career change, he boarded a canal boat on the Grand River and traveled to Rochester, Pa., with the intention of going to sea. Seeing the sidewheel packet Hibernia No. 2 at the Ohio River landing, he paid passage to Cincinnati and would later become one of the leading rivermen of that city.

In June 1881, Miller lost the Guiding Star at a public sale conducted by a U.S. Marshal in Cincinnati. The riverboat was purchased by Capt. J.D. Hegler, who continued operating the vessel in the Cincinnati–New Orleans trade.

In 1883, Hegler purchased Parker’s Grove (above Cincinnati) and renamed it “Coney Island of the West,” operating it as an amusement park. The Guiding Star and the Minnie Bay were the first steamboats to handle passengers at the site. Hegler later sold the park to Lee H. Brooks.

On January 6, 1893, the Guiding Star was destroyed by ice on the Mississippi River, eight miles below New Madrid, Mo.

The roof bell was salvaged from the wreck and taken to New Albany, Ind., (opposite Louisville) where it served on a fertilizer plant. In 1914, Capt. C.C. Bowyer purchased the bell for the new excursion sternwheeler Homer Smith, then being completed at the Howard Shipyard at Jeffersonville, Ind.

Caption for photo: The Guiding Star as a new boat at Cincinnati in 1878. (Keith Norrington collection)