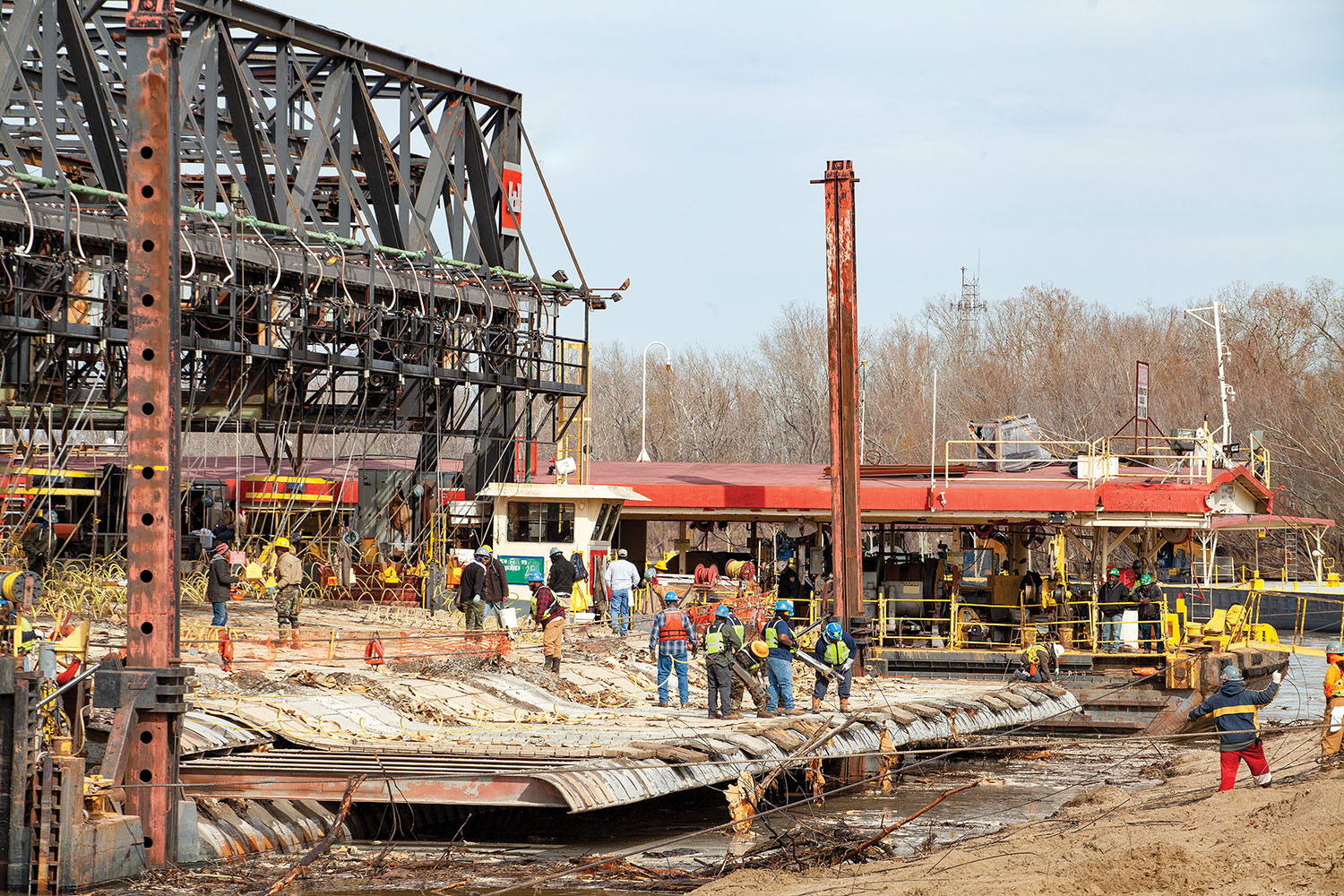 The river road through St. Gabriel, La., located on the left descending bank near Mile 200 on the Mississippi River, is a quiet stretch, with plots of farmland dwarfing neighborhoods and industry. With the towering river levee blocking the view of the Mississippi, and with the river in the midst of its low-water season, street-level passersby can easily go about their day with little cognizance of the mighty river.

For residents walking or cycling atop the river levee in St. Gabriel, though, the view on the other side of the batture tells a different story, with oceangoing ships and barge tows sliding by. And recently, their view also included a wonder of engineering and waterway management that few get to see: the U.S. Army Corps of Engineers’ Mat Sinking Unit (MSU).

The Mat Sinking Unit works annually on the Mississippi River during low water, laying mats of concrete squares on the river bottom, from the bank toward the channel, to help prevent erosion. Each “square” is a 4-foot by 25-foot piece of concrete. Squares are woven together to form a mat, which slides overboard. Gantry cranes move squares from a supply barge onto the main deck of the mat sinking plant, where deck workers tie them together using pneumatic tools that are unique to the MSU.

The Mat Sinking Unit has had a long 2020–21 season, at least in relation to recent years. The team of 300 got to work July 21. So far, the revetment unit, which includes a quarter barge, motor vessels, barges working in tandem, shore-based bulldozers and the mat assembly plant, has worked as far south as Mile 43.7 in Plaquemines Parish, La., and as far north as Mile 865, Little Cypress, within the Memphis Engineer District.

Ed Adcock, chief of the revetment section for the Vicksburg Engineer District, said the team may actually get to add to its mat sinking to-do list this year.

“That would put us completing the revetment season around the 21st of February, with everyone back in the harbor of Vicksburg on the 23rd,” Adcock said.

In contrast, the team’s 2019–20 had to be suspended due to persistent high water on the Mississippi River. Adcock said this year’s long-lasting low-water season has been a key to his team’s success.

“It’s been a significant thing for us, this low water during our revetment season,” Adcock said. “That’s the only reason we’re looking at some additional sites to extend the season for about 10 days. The low water has definitely been our friend this year, compared to several years prior when the season was cut short by rising water and our inability to get to the bank.

Adcock estimates the team will finish with about 240,000 squares laid this season, up from around 170,000 squares a year ago.

Remarkably, the success of this year’s revetment season has come during restrictions due to COVID-19. Adcock said his team implemented significant safety measures to help reduce the spread of the virus amongst crew members. The foundation of those measures are CDC guidelines for social distancing, mask-wearing and sanitation.

“We’ve also increased our medical staff, our paramedics, and we added a nurse to administer testing for COVID,” Adcock said.

The work schedule is also different this year, with crews working 25 days on and three days off, up from a 12 and two schedule a year ago. The MSU also transports workers to and from home in government-supplied vehicles “to avoid having so many people stop along the way and increasing the risk of infection from COVID,” Adcock said.

“Basically, we’re maintaining a cleaner environment as far as our exposure and risk go,” he said.

Aboard the quarter barge, lunch breaks are longer in order to reduce crowds in the galley. Also, rooming arrangements have been adjusted to reduce the number of people sharing bunk rooms.

When crew members do test positive for the virus, Adcock said they are immediately transported home in a designated van for the duration of their quarantine. Roommates and anyone considered in close contact are also sent home to quarantine.

“I think that’s gone a long way to help us keep it in check,” Adcock said, adding that the infection rate within the MSU has been much lower than the community at large. “It has not impacted our ability to accomplish the mission to this point.”

Adcock attributes that to the close-knit, professional work force aboard the MSU, many of whom have spent their entire careers on the team.

“Everybody knows it is a difficult situation, and I think they’re just happy to be out here working and earning a living for their family when so many jobs have been lost in the community,” he said. “Relatively speaking, we’re blessed to be out here having a job to do that contributes so much to the nation.”

The mission of mat laying dates back to the 19th century on the Lower Mississippi River, when teams would weave mats of willow trees together and sink them with boulders. Mat laying remains a crucial part of the task of keeping the river in its place and maintaining commercial navigation.

“What we’re doing is armoring the banks of the river where the river current has a tendency to erode the soil at the bank and change the course of the river,” Adcock said. “The other thing we’re doing is, by holding that material in place on the bank, we’re keeping it from entering the navigation channel.”

The current Mat Sinking Unit dates to 1948, and it shows. Much of the machinery aboard the unit is unique to the plant. The pneumatic weaving tools have to be rebuilt and repaired on site, and the unit houses a World War II-era lathe for turning new parts. Over the Christmas break, a weld failed on one of the gantry cranes, Adcock said. The failure didn’t result in a work stoppage, but it illustrates the need for a new plant.

“It’s been reliable for many years and we’ve kept it patched together, but things like this will continue to happen,” he said. “It may result in more down time and loss of production in the future without the plant being replaced in the future.”

New MSU In The Works

Fortunately, a new MSU, to be named ARMOR 1, is in the works. The new unit will be more automated and will feature a robotics system designed in partnership with Carnegie Mellon University’s National Robotics Engineering Center. Bristol Harbor Group is leading the engineering and design for the unit, which will be built at Thoma-Sea Marine Constructors’ facility in Lockport, La.

John Cross, project manager for ARMOR 1, said final robotics prototype testing was completed at Carnegie Mellon in September 2020, with steel already on site and hull construction to begin this month at Thoma-Sea. COVID caused some delays for prototype construction robotics testing, Cross said, but no delivery delays are expected at this time.

The new unit will employ a smaller workforce, but it’s designed to lay at least twice as many squares per day as the current plant.

“We’re looking forward to being able to increase our production rate with the new plant, to get more work done and to be able to better protect the interests of commerce and the nation,” Adcock said, “doing so in a better work environment for the safety of our crew.”