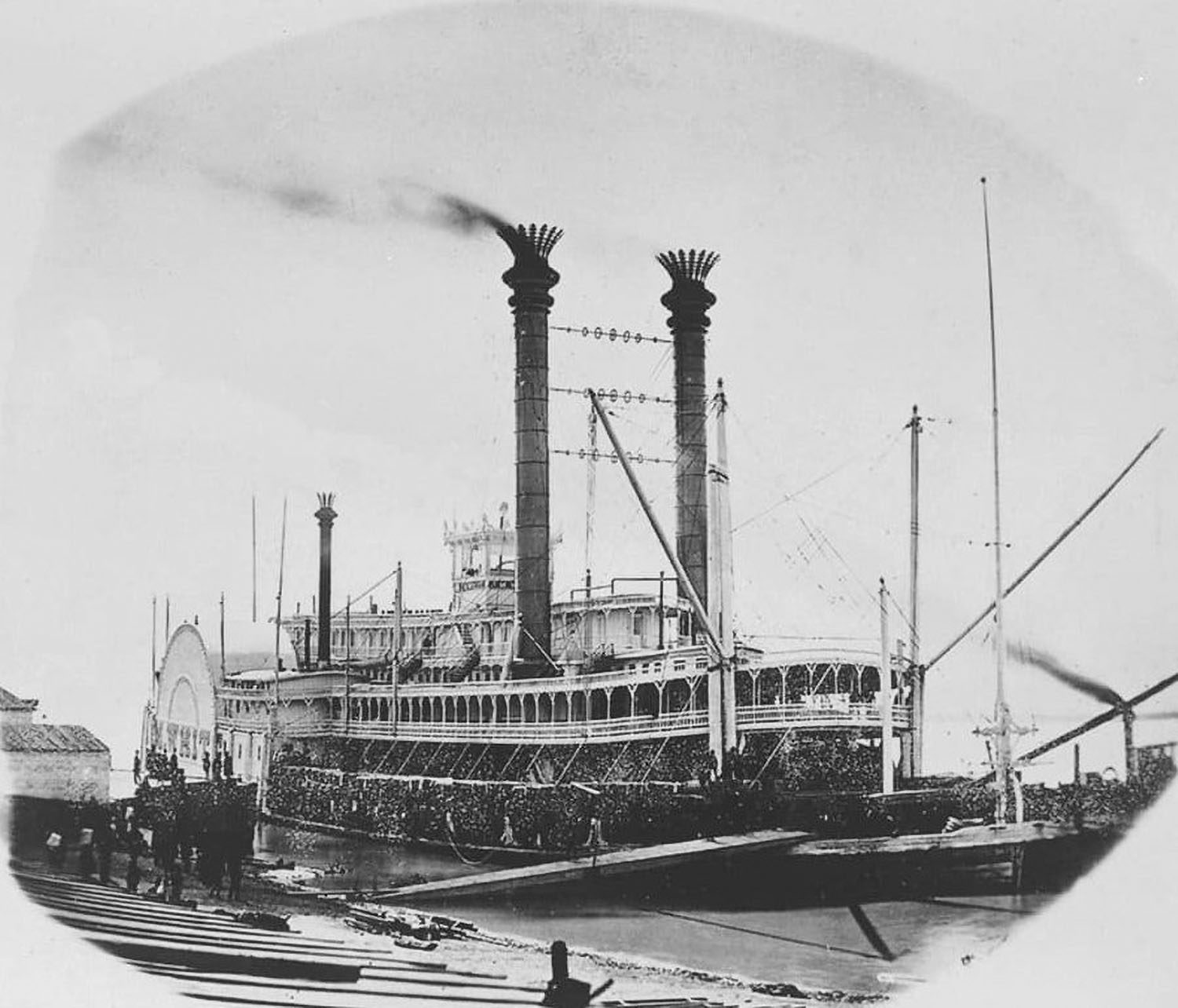 In 1878, the Howard Shipyard of Jeffersonville, Ind., completed work on its magnum opus, the J.M. White.

Owned by the Greenville & New Orleans Packet Company, the big sidewheeler’s wooden hull measured overall 321 feet in length by 91 feet in width, including the cotton guards. Ten boilers supplied steam to engines having 43-inch cylinders with an 11-foot stroke. The paddlewheels were 44 feet in diameter.

Named for Capt. J.M. White (1823–1880) of Cloverport, Ky., the packet was the 276th steamboat built by the Howards. The contract was signed June 12, 1877; it was the fourth riverboat to be built for revered Southern steamboatman Capt. John W. Tobin.

The White was launched on April 3, 1878, and it was taken over the Falls of the Ohio a month later to New Albany, Ind., where, reportedly, much of the work was completed; finishing touches were done at Paducah, Ky., and Cairo, Ill. The contract price for the opulent riverboat was $103,500.

Renowned as the supreme triumph in cotton boat architecture, it later came to be known as the “Mistress of the Mississippi.” A lengthy and detailed description of the great steamboat, written by Col. Will S. Hays, was published in the Louisville Courier-Journal shortly after the vessel’s debut. No effort was spared to make the J.M. White the mightiest steamboat afloat, and it was said to be an engineer’s dreamboat, a pilot’s paradise and a passenger’s idea of supreme elegance.

On the White’s maiden trip south, it towed the partially completed steamer Edward J. Gay. Due to economic problems and the scourge of yellow fever, the White never carried its cotton capacity; the banner trip totaled 5,067 bales. The boat ran in the New Orleans–Vicksburg trade, teamed up with the Robt. E. Lee (second) and the seventh Natchez.

On December 13, 1886, after a trip down from Vicksburg, the White was tied up at Blue Store Landing, St. Maurice Plantation (Point Coupee Parish, La.) near Bayou Sara. The cargo consisted of 3,600 bales of cotton, 8,000 sacks of seed, 400 barrels of oil and some 40 passengers. The lines had barely been tied to the wharf when flame leapt out of the main deck, quickly enveloping the steamboat in a spectacular conflagration. Gunpowder stowed in the hold exploded, and huge timbers were hurled aloft. It was reported that some 28 people (including crew members) perished, and the number of deaths would have been greater had it not been for the heroism of the clerk, Walsh Floyd, who lost his life while saving others. One of the unusual casualties was a gigantic ox named Otoe Chief, weighing 3,980 pounds and billed as the largest in the world. The animal had been exhibited throughout the South and was en route to New Orleans to be featured in the upcoming Mardi Gras.

At the time of its demise, the J.M. White was valued at $60,000, but insured for only $27,000. It was later learned that the insurance policy was reduced by $2,500 during the first week of December and that the owners were considering cancelling the entire coverage due to the high cost of the premiums. After only eight years of operation, the steamboat had become a tremendous financial liability and was under charter to other operators.

A grand piano, numerous chairs, silverware and other relics from the revered riverboat survive in museums and private collections.

Recalling the disaster (nearly 135 years ago) it is also interesting to note that the silt-covered remains of the famous riverboat continue to make periodic appearances during times of low water.