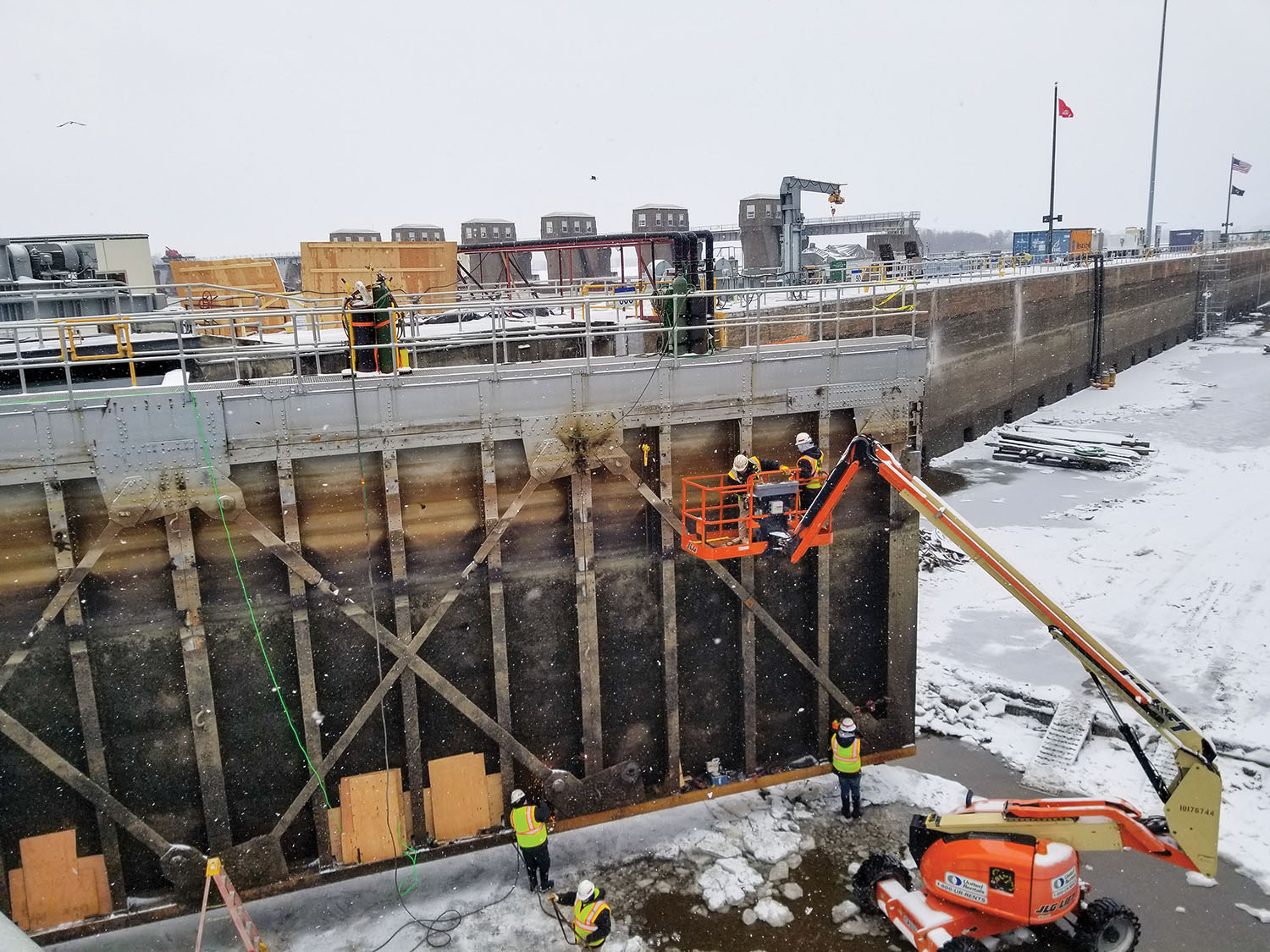 Lock and Dam 4 on the Upper Mississippi River in Alma, Wis., saw on average about 6,000 loaded barges per year pass through over the past five years, with 10 million tons of cargo during the past year alone. Farmers in this region depend on it. Most downbound barges carry corn and soybeans, while the northbound ones carry mostly fertilizer, salt and cement. About 4,000 recreational vessels use the lock each year.

“The COVID-19 lockdowns have not affected that traffic at all,” said Joe Shroetter, project manager with the St. Paul Engineer District. He has been overseeing the dewatering and repairs of Lock and Dam 4, which began December 7. The 85-year-old lock and dam is rehabbed on a 20-year cycle; the last time it was dewatered was 2001.

Schroetter says the weather so far has been cooperative. Not that bad weather stops the work. “I can’t say enough about these teams that work in all conditions. Our maintenance and repair crews, not contractors, do all the work themselves. There really is no such thing as ‘bad weather’ for them. They never take a day off.” Schroetter says he will never forget the winter of 2015, when temperatures on the river were below zero for 20 straight days, and wind chills went down to 40 below on multiple days but didn’t stop work.

This year, though, seems to have been warmer than average. Lock and Dam 4 controls water levels on Lake Pepin (not really a lake but a wide part of the river), and Schroetter said he is noticing lots of open water on the lake even this late in the season. “That’s something I’ve never witnessed before,” he said.

The first thing crews do after the lock and dam closes for the season is to put up bulkheads upstream and downstream. Then the lock is pumped out, a process that takes about two days.

Crews repair loose or crumbled concrete on the lock walls, a job made much easier since they got a concrete grinder that is operated from inside a cage on a backhoe. “Our crews used to have to use jackhammers and saws to work perpendicularly on the concrete. The grinder has been a huge benefit,” Schroetter said.

The miter gates are jacked up with hydraulic jacks, so that diagonals and timbers are removed and pintles and bushings can be inspected. Metal surfaces are blasted using grit made from coal slag. The entire miter gate is covered with poly plastic sheathing, and scaffolding is put up on both sides of the gates, which weigh between 64 and 67 tons each. The sandblasting can’t use heat, which could promote rust. It takes place at night, and the exposed parts are painted. “It’s a good thing the sandblasting generates sparks to help the team members see what they’re doing,” Schroetter said.

Team members inspect weep holes on the lock floor that allow water pressure to be relieved. They blow them out and repack them with aggregate. They regrease the grease lines in both miter gates.

On the upstream side of the gates, they renew the bubbler pipes. The bubbler system keeps the gates’ hinges free from ice in the winter and blows out debris in the summer months.

There’s nothing Schroetter enjoys more, he said, then educating members of the public about the lock and dam. “Keeping these facilities operational is so important for our carbon footprint,” he said. “One barge equals 70 semi truckloads.”

The entire repair and rehab operation costs about $4.5 million.

Caption for photo (click on photo for full image): Lock and Dam 4 in Alma, Wis., is dewatered in order to conduct maintenance. Major winter maintenance like this occurs about every 20 years and includes concrete repairs, sandblasting and repainting the miter gates and updating the bubbler system used to prevent ice buildup within the lock chamber. Due to the use of heavy equipment and safety requirements, the parking lot and pedestrian bridge are closed during the repairs. The $3.5 million maintenance project is scheduled to be completed mid-March, ahead of the 2021 navigation season. (Photo courtesy of St. Paul Engineer District)