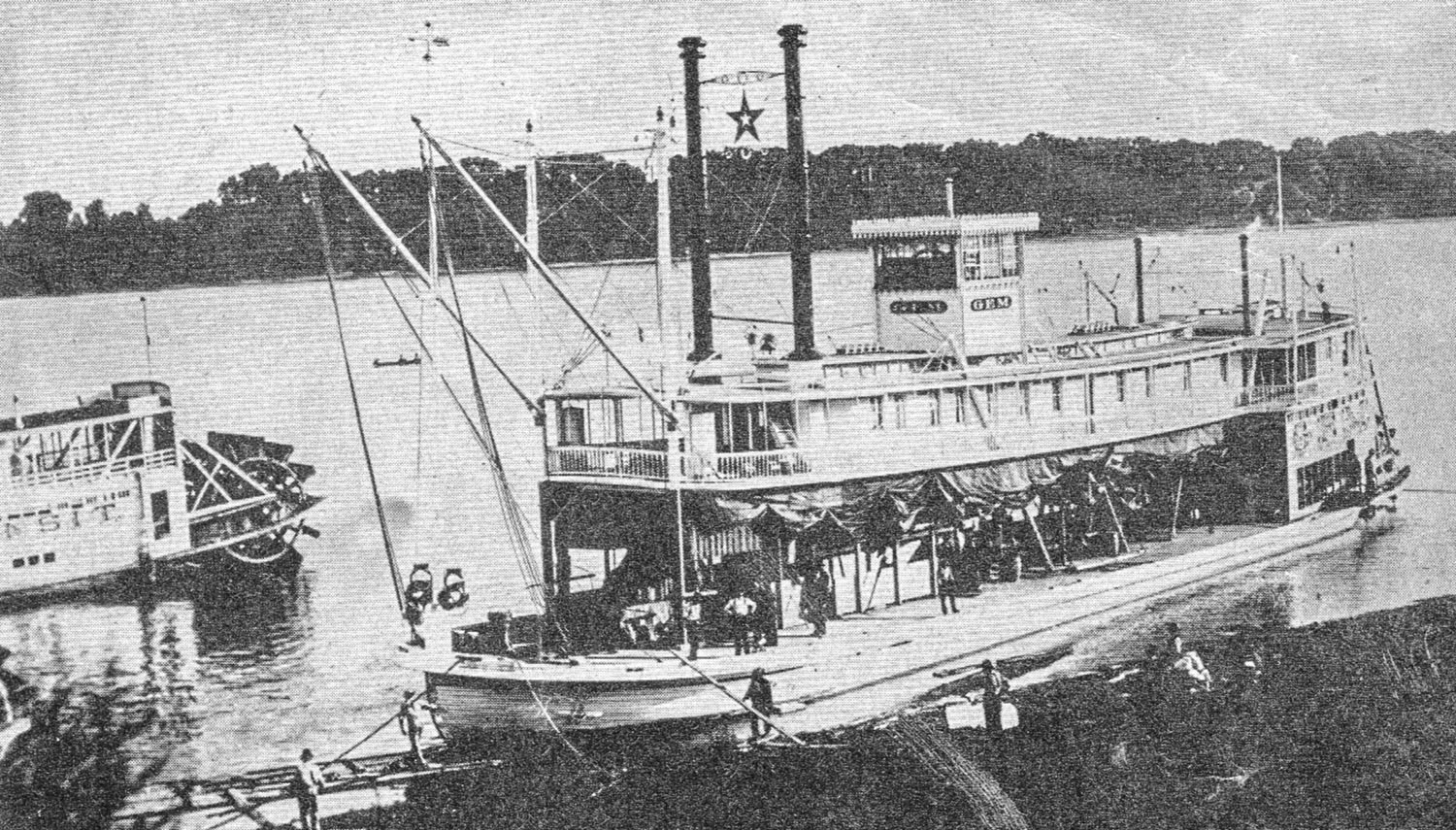 Built for the Red River and Caddo Lake cotton trades above Shreveport, La., the cotton packet Gem was constructed in 1898 along the Ohio River. It was a product of the famed Howard Shipyard at Jeffersonville, Ind., and built on a wooden hull that measured 135 feet in length, 21 feet in width and with a shallow depth of 4.2 feet. Three boilers provided the steam.

The contract price for the sternwheeler was $10,500. Charles Truslow was president of the packet line, with Charles Drown as traffic manager.

As with a number of other riverboats owned by the Red River Line, the Gem had a star suspended between its twin smokestacks.

Initially owned by Capt. Ben Rea, the steamboat had numerous flirtations with danger during its 16 years of operation; the first was a sinking caused by striking a snag, on February 15, 1901, with 650 bales of cotton aboard. While backing out from the Union Stave Company’s landing in 1904, a hole was punctured in the boat’s bottom, forward of the rake. Fortunately, a sinking was averted, and the hull was quickly repaired.

The boat sank again near Browns Landing on the Red River on January 30, 1908, and yet again at Elevator No. 3 in the New Orleans harbor on November 23, 1910, while making several attempts to land, due to low water conditions. An underwater obstruction was determined to have started the leak, and the riverboat went down while discharging cargo. At that time the boat was insured for $5,625, and the steamboat inspectors estimated the vessel’s value at $7,500. Rivermen decreed that the plucky sternwheeler was lucky to survive the sinking.

The Gem’s history also includes a dreadful incident. On November 13, 1901, just after the boat made a stop at Monclos Landing, 50 miles from Alexandria, La., a strong wind blew the steamboat away from the bank. The movement caused the stage plank to fall into the river just as a porter was carrying a child across it; the child, Dow Cross, was tragically drowned.

The Gem was eventually sold to the prominent Comeaux family for the New Orleans-Bayou Sara trade, with connection to Natchez by way of the steamer Betsy Ann. With Capt. R.J. Comeaux in command and Capt. Fred Ketchum as mate, the boat caught fire near Hahnville, La., on Saturday, February 14, 1914. The conflagration was reported to have ignited from bales of moss; Spanish moss being widely used in the manufacture of mattresses and pillows. The flaming riverboat was quickly beached, but five crew members and one passenger lost their lives. Among those lost were both pilots, Capt. Eddie Comeaux and Capt. William Barre. The Waterways Journal, in its February 21, 1914, issue, reported that the bodies of the pilots had not been recovered. The Gem was destroyed in the blaze.

The Howard Steamboat Museum is still seeking the donation of a capstan for its outdoor exhibits and for educational programs. Contact Travis Vasconcelos, director/curator, at travis@howardsteamboatmuseum.org. Thanks!