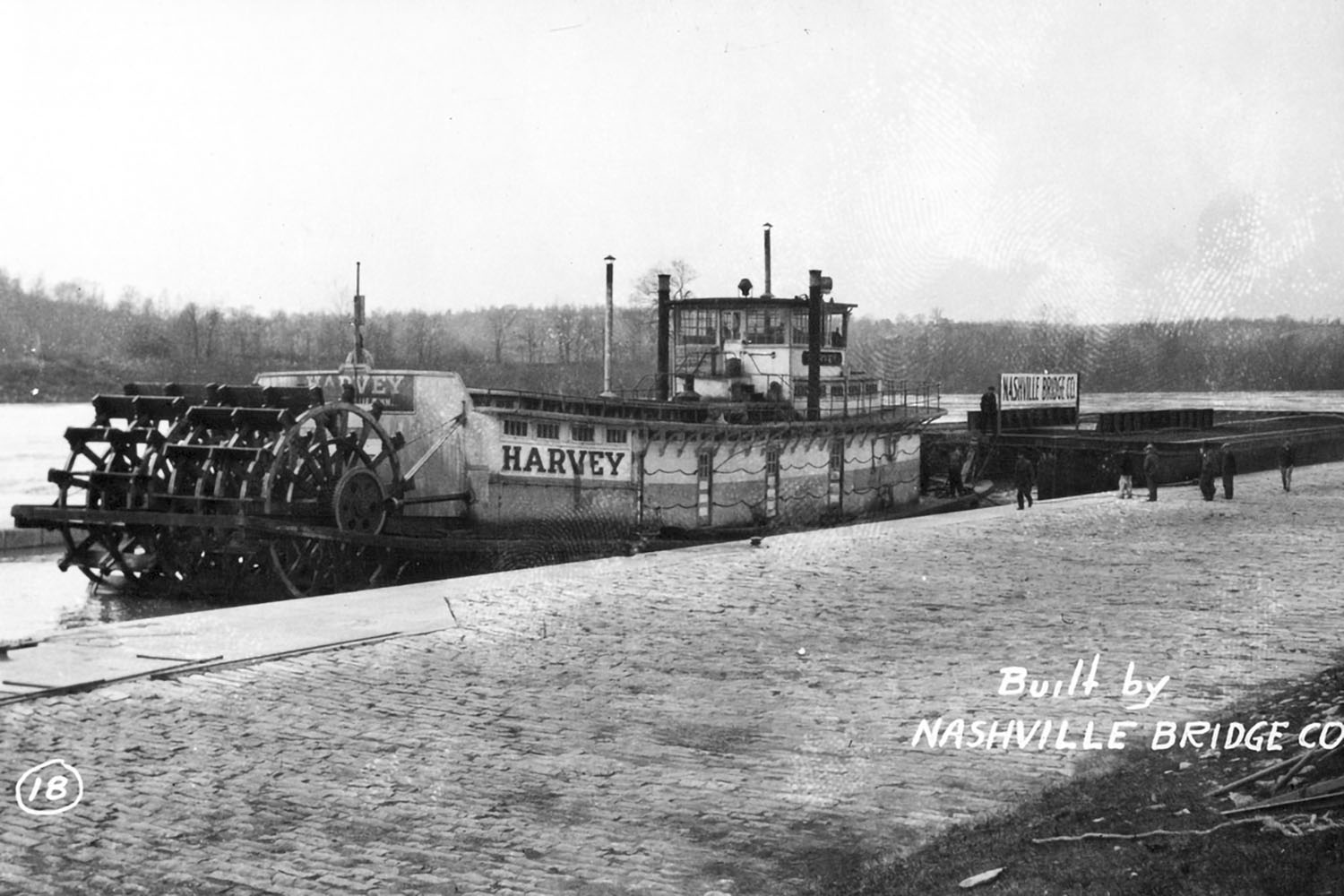 In 1923 the Nashville Bridge Company, Nashville, Tenn., launched a vessel that was a “first.” It was the sternwheel towboat Harvey, built for T.L. Herbert & Son. The boat was 93 by 26.8 feet with a hull depth of 4.3 feet. It had a steel hull with a cabin built entirely of wood.

The Harvey’s immediate claim to fame was the means of power. According to Capt. Fred Way in the 1951 edition of the Inland River Record, the boat had the first installation of fully diesel engines on the inland rivers. These were Worthington engines developing a total of 240 hp. They were connected to twin sternwheels turned by gears.

The Harvey was transferred in 1945 to Sangravel Company, Paducah, Ky., and repowered with a pair of Fairbanks Morse model 35 diesels totaling 480 hp. In 1949 it is shown as owned by W.G. Bush & Company, Nashville, and in 1951 it was sold to Nugent Sand Company, Louisville, Ky.

In the 1950s the Harvey and the sternwheel towboat Martha E. Green of Green Sand & Gravel raced in the Louisville area, each pushing a barge. In 1959 the Harvey was sold to Ralph Raike, Point Pleasant, W.Va., and renamed Kathy R. At some point, the towboat’s superstructure was altered to include a full second cabin under the pilothouse.

Raike utilized the boat towing sand and gravel from the Ohio River to points on the Kanawha River. In 1964 it was rebuilt at the Marietta Manufacturing Company plant at Point Pleasant, where it was converted from sternwheel to prop. Its two Fairbanks engines remained mounted forward on top of the main deck, and shafts were installed below the deck, running up to just below the rear of the engines.  Pulleys turned by “V” belts were mounted to the shafts and engines to span the 3- or 4-foot height difference between them. Following this conversion, the length of the hull increased to 100 feet.

I was first aboard the boat soon after this sale when Capt. Harry White’s son, Capt. Dick White, gave me a tour of the boat while it was tied off at Merdie Boggs & Sons in Catlettsburg, Ky. I vividly remember standing between the massive Fairbanks engines while Dick explained the rituals required to get the boat ready to start when the engines were cold. They were direct-reversing engines, meaning they turned one direction while operating ahead and had to be stopped and restarted turning the opposite rotation to go astern.

In 1977 White Brothers repowered the boat, replacing these engines with a pair of Cat D343TA engines totaling 650 hp.

In 1981, the boat was sold to Madison Coal & Supply Company (now Amherst Madison), Charleston, W.Va., and renamed C.T. Jones in honor of Amherst Industries Board Chairman Capt. Charles T. Jones. From the time it was built, the boat had carried the roof bell of the Str. Sycamore (Way’s T2369), which was removed just prior to acquisition by Madison Coal. Under their ownership, it sported the bell originally on the Str. C.C. Webber (Way’s T0313), which in 1947 became the Ellen Hatfield and came under Amherst ownership in 1950.The Ellen Hatfield was dismantled in 1956.

It was my privilege to work aboard the boat as captain/pilot a few times under this ownership. The boat was roomy and comfortable to live on. The interior was paneled in a stained veneered plywood that was quite attractive.

To say it handled like a dream would be somewhat untrue (It didn’t.), and when downbound on the Kanawha with a single string of loads (The old locks then required the lockage of one barge at a time and typical tows were a single string five barges long.) you had to start steering BEFORE the tow began to swing, otherwise it was too late to correct it. The shallow draft of less than 4 feet did not give her much command over a loaded tow.

All that considered, I thoroughly enjoyed the time I spent aboard. To sit behind the steering levers in the pilothouse was to feel as if I were stepping back in time. When the Cat engines were installed, the large-diameter exhaust pipes of the Fairbanks were left in the stacks that extended up each side of the pilothouse. The sound of the Cats resonated in a pleasant, throaty rumble through those exhausts, making the old girl sound meaner than she was.

I worked with some good men aboard the C.T. Jones. The first time I got on, I relieved Capt. Steve Grossarth, and I later worked aboard with Capt. Timothy “Bo” Taylor. The boat was always kept in fine shape, and the tows were expertly handled through those old locks by men such as Billy Arp and Don Houston. The “V” belts were kept tight, and plenty of belt dressing was at hand to keep them from slipping. Many jokes were flung its way when people referred to it as the “rubber band boat.” Despite its drive train and light draft, I don’t personally recall any serious incident that it was involved in.

In 1992 the boat was sold to Margaret Gardner of Charleston, renamed Elizabeth H and used as a houseboat. In 1996 it was again sold, to Ruble’s Sternwheelers Inc., Belpre, Ohio, and finally, in 1999, it was sold to Bartley Marine Inc., Wellsburg, W.Va.

The boat burned to the waterline in January 2003 at Wellsburg, and the hull was ultimately scrapped. Thus ended a full and interesting towboat career of some 80 years. This time span was definitely a testament to its builders, Nashville Bridge, the various companies that owned and maintained her, as well as the multitude of rivermen who worked aboard over those years.

Many thanks to Steve Huffman and his generous sharing of his meticulous records. Past editions of the Inland River Record were also consulted.