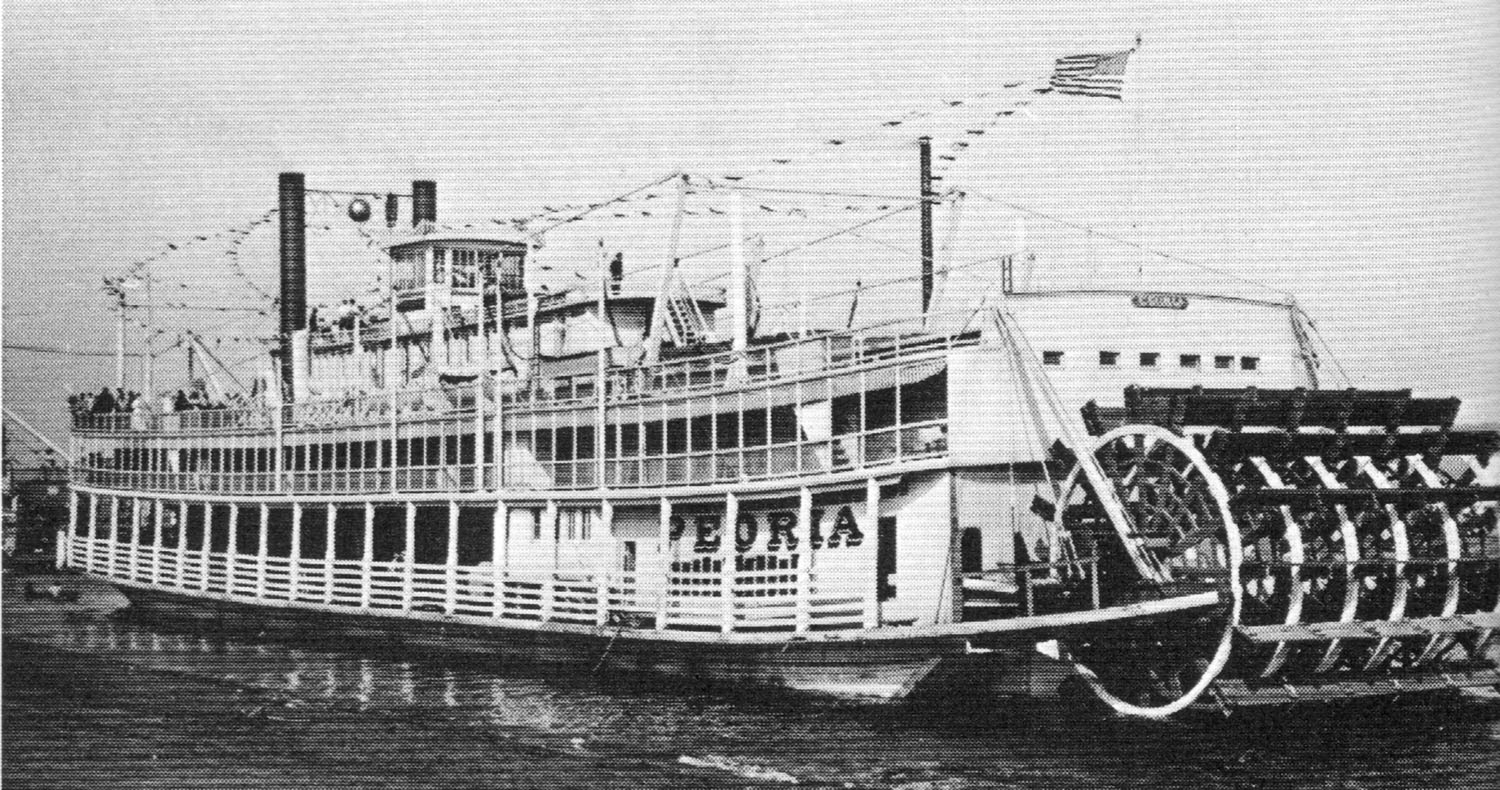 The Eagle Packet Company of St. Louis contracted in 1913 with the Howard Shipyard to build a wood-hulled sternwheeler for $26,000.

The new steamboat, 242 by 37.8 feet and named Peoria, was not completed at Jeffersonville; it was moved by the towboat Dorothy Barrett to Paducah and then to St. Louis, where the vessel received its final outfitting. Four new boilers were placed aboard, along with the recycled engines (22-inch cylinders with a 7-1/2-foot stroke) from the towboat Ed Roberts, considered by rivermen to be one of the best “coal pushers” between Pittsburgh and Louisville.

The trial trip of the vessel was made on October 14, 1914, with Capt. W.H. Thorwegan, former owner of the famed Grand Republic and other steamboats, in command. The trial run proceeded upriver to Alton, Ill., where the riverboat was put through its paces in front of the home of the Leyhe family, owners of the boat. Commodore Henry Leyhe, in frail health and seated in a wheelchair, watched from the porch; he passed away several weeks later on November 10. The new packet boat was designed for passenger comforts, with running water and electric fans in every stateroom.

The christening of the Peoria at its namesake city was a grand affair, said to have been attended by some 10,000 people. The new boat was escorted up the Illinois River by the state-owned steamer Illinois and members of the Illinois Naval Reserve. The United States steamer Pearl joined the parade at Pekin, where Illinois Gov. Edward Dunne and the Peoria Military Band also met the boat after arriving aboard the steamer Kabekona.

The Peoria ran in the St. Louis–Peoria trade and also made trips to Mardi Gras in 1916 and 1917 with Capt. Buck Leyhe as master.

In January 1918, for safety’s sake, the boat was taken to winter quarters in the mouth of the Tennessee River, known as the Duck’s Nest, at Paducah, Ky. As severe ice gorges rapidly formed, steam was quickly raised to roll the paddlewheel in an effort to offset the strain on the mooring lines. The crew jumped ashore as the frozen lines began snapping and the riverboat, its engines working slowly ahead, broke loose and pivoted out into the river, headed downstream. With no one aboard and its lights brightly aglow, the Peoria eerily disappeared into the darkness.

For a time, nobody knew the fate of the big sternwheeler, but after the ice gorge cleared some time later, Capt. Billy Lepper found the capsized hull several miles below Paducah. The engines were lost, but the boilers were salvaged from the wreck and placed aboard the Wm. Garig, a Ouachita River packet built by the Howards in 1904.

The Eagle Packet Company (which also lost the steamboats Spread Eagle, Alton and Grey Eagle in the ice) purchased the Garig with the insurance money from the loss of the Peoria; it was the only vessel upon which they carried insurance.

The Eagle firm would later rebuild and rename the sternwheeler Golden Eagle, the last St. Louis-owned overnight passenger boat. It would have a colorful career lasting until 1947.

Caption for photo: The Peoria as a new boat in 1914. (Keith Norrington collection)