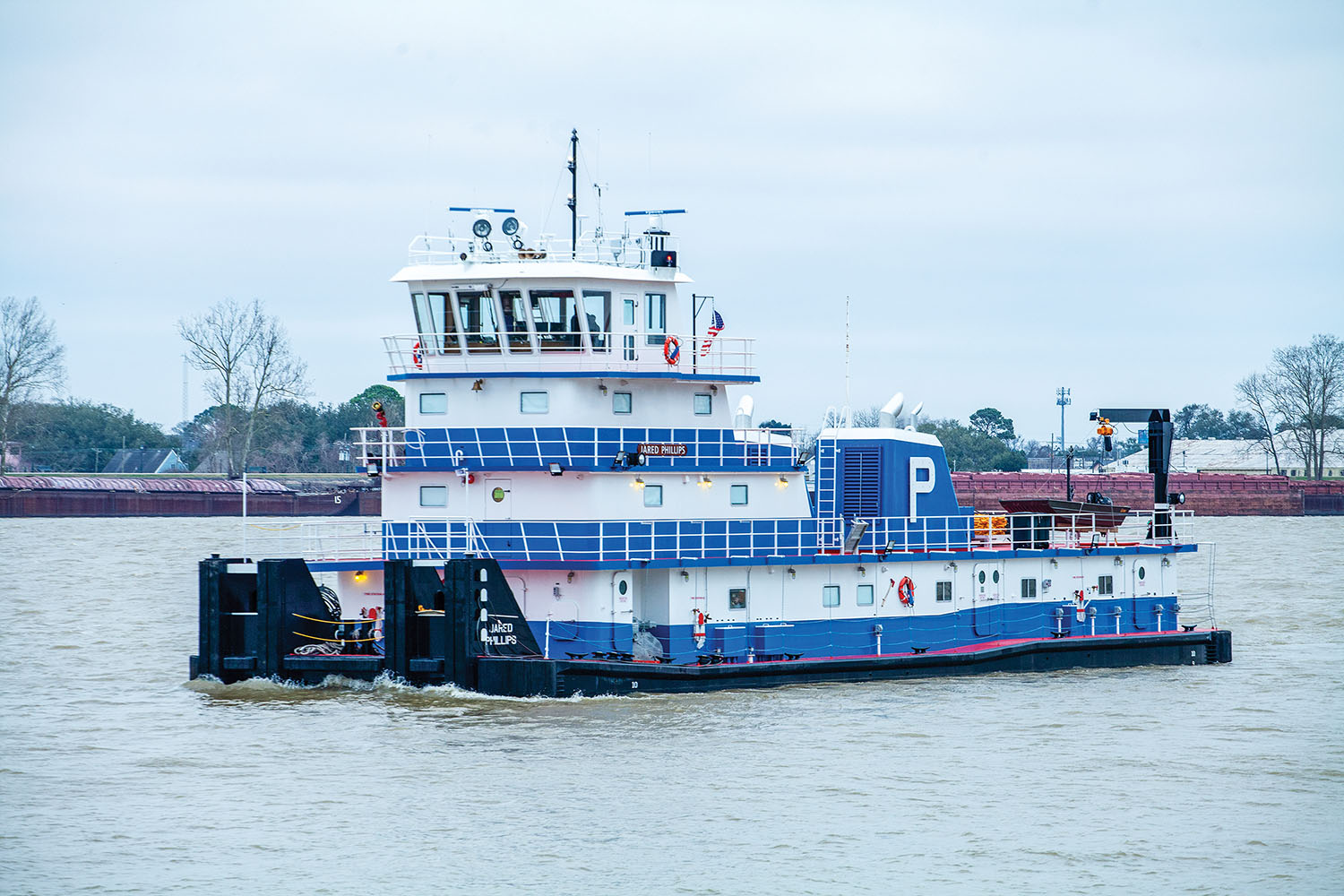 On a cold February evening—frigid by New Orleans’ standards—the mv. Jared Phillips, the newest vessel in Parker Towing Company’s fleet, motored through the Harvey Canal, down the Mississippi River past the city’s French Quarter, and through the Inner Harbor Navigation Canal, bound for the Intracoastal Waterway. The 4,200 hp. towboat, built at FMT Shipyard on the Harvey Canal, made its way east to Mobile, Ala., then north to Parker Towing’s headquarters in Tuscaloosa, Ala., where it quickly entered service on the Black Warrior-Tombigbee Waterway (BWT).

The vessel is named for Parker Towing Company’s director of business operations, Jared Phillips, who has been with the company for 10 years. Phillips, a native of Huntsville, Ala., began attending the University of Alabama in Tuscaloosa in 2002. While in college, he met the former Alison Parker Haun, daughter of Parker Towing Vice Chairman and CEO Charles Haun and niece of Chairman Tim Parker Jr. The couple have been married since August 2010 and now have two sons, Parker and Theo. Alison Parker Phillips serves as Parker Towing’s director of communications.

Phillips started out as information technology manager for Parker Towing. He has also contributed and led in multiple roles in the operations department. Phillips did weekend duty as a dispatcher from the time he joined the company, he said. His role now involves managing the logistics of the company’s fleet, the Tuscaloosa dispatch office and information technology initiatives.

Phillips said, like a lot at Parker Towing, it was a family affair when he found out about the naming of the mv. Jared Phillips. He heard the news from his wife and his brother-in-law, Parker Towing Executive Vice President Chas Haun.

“I think Chas, Alison and I were sitting in Chas’ office, and they both told me they’d decided to have the Jared named after me,” Phillips said. “It was certainly a surprise. I was extremely excited, and it’s an incredible honor. It’s definitely something I’ll never forget.”

Phillips said, due to COVID restrictions and the distance between Tuscaloosa and the New Orleans area, he was only able to see pictures of the boat under construction. He didn’t physically lay eyes on the boat until it arrived in Tuscaloosa.

“It’s a beautiful boat with a great crew, and it’s a tremendous sense of pride when you can walk through a boat like that and then for it to have your name on it,” he said.

More than that, Phillips said he takes pride in being part of a company and an industry that’s so essential to the wellbeing of the nation and world, even if it goes largely unnoticed by the general public.

“It’s always out of sight, out of mind for most people,” he said, “but for us in the industry, it’s our whole world.”

Phillips said he’s the first in his family to work in a maritime industry-related job. Though he grew up near the Tennessee River in Huntsville, Phillips’ family had a closer connection to the space industry in that part of the state. His maternal grandfather worked for NASA in Huntsville beginning in the 1960s. Now, he said it’s fun to see his two sons get excited about the company’s towboats and barges.

“They love to go to the dock, and we always look for boats when we go over the bridges here in Tuscaloosa,” he said.

About The Mv. Jared Phillips

The mv. Jared Phillips is the fifth overall towboat built at FMT Shipyard, the vessel repair and construction arm of Florida Marine Transporters. The vessel was completed February 13 and departed the New Orleans area on February 18. Vessel design is by Gilbert Associates Inc.

With the mv. Jared Phillips delivered, FMT Shipyard is already at work on its sixth new towboat project. The shipyard also recently won a contract for a series of twelve 1,600 hp. towboats.

“Considering the economy and the past year with the pandemic, we’ve been busy, and I’m thankful that we’ve been able to keep all our crews working,” said Chip Stiebing, FMT Shipyard’s general manager.

Meanwhile, Parker Towing has another towboat, the mv. Olive Parker, due out of C&C Marine & Repair soon.

As for the mv. Jared Phillips, that vessel primarily will work on the Black Warrior-Tombigbee Waterway, transporting coal and other cargoes between Birmingham and the Port of Mobile, with its area of operation also including the Tennessee-Tombigbee Waterway; the Tennessee, Ohio, and Upper and Lower Mississippi rivers; the eastern Gulf Intracoastal Waterway; and Mobile Bay. When the vessel’s at work on the BWT, for Phillips that will mean being able to look out his office window and see the vessel bearing his name motor by.

“I’ll be jumping on there more than once,” Phillips said. “You can jump on at our office heading northbound and be back within 48 hours or less.”