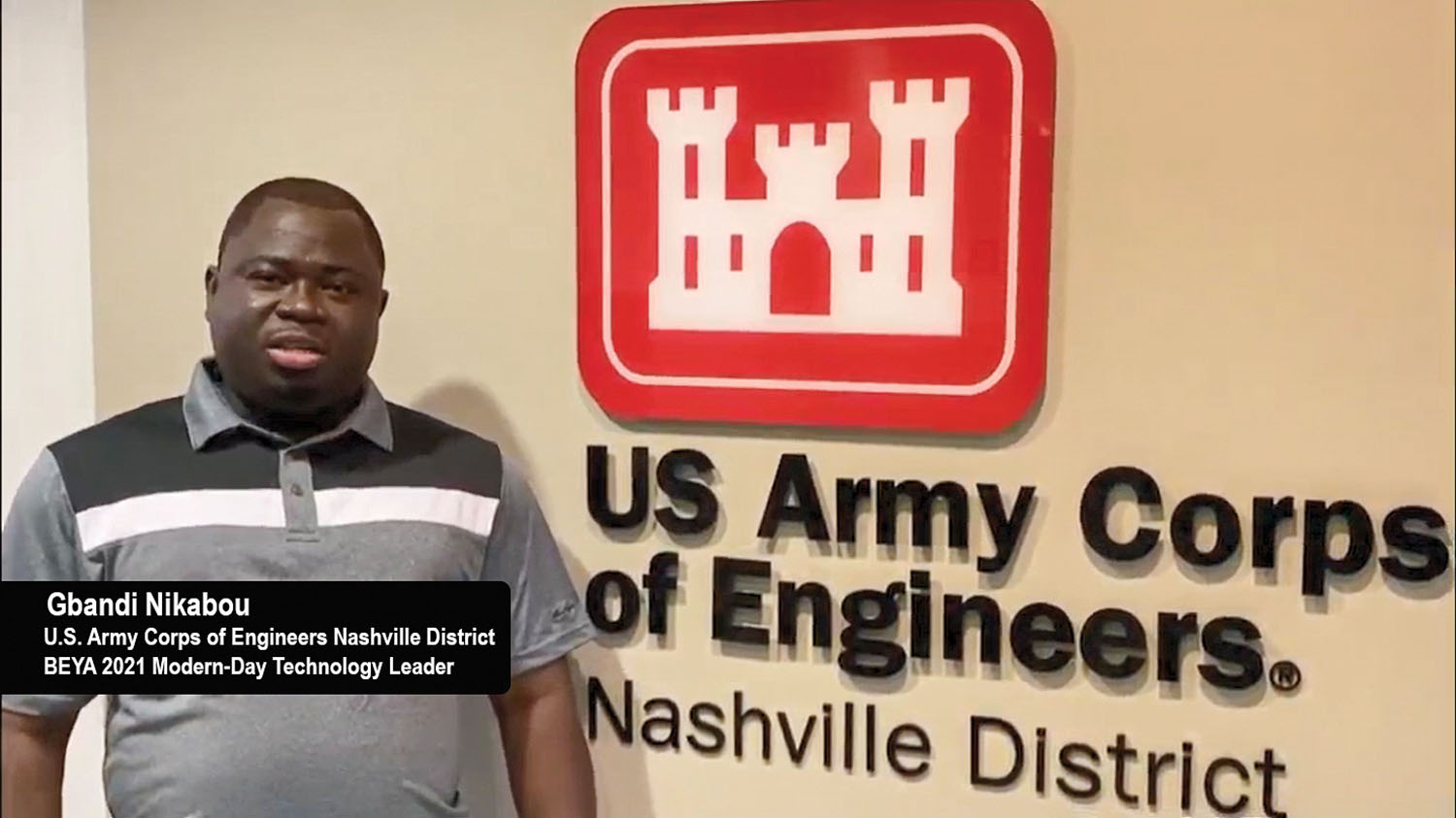 A structural engineer with the Nashville Engineer District received a special honor during the 35th Black Engineer of the Year Awards ceremony hosted virtually last month from Detroit, Mich.

Addressing the honorees, Hill encouraged them to “stand up, step up and make the change that can make the difference.”

Nikabou has done just that, overcoming adversity over the past decade. When he migrated to the United States from Togo in west Africa, he didn’t speak English, had no family members he could rely on and had to work multiple jobs to earn a living while also saving for college. Despite the challenges, he earned an associate’s degree from Massachusetts Bay Community College and then his bachelor’s and master’s degrees from the University of Massachusetts Lowell. He received multiple job offers from several Corps districts before choosing the Nashville District in 2017.

“I ended up choosing Nashville after learning about the three mega projects,” Nikabou said. “If there is one thing I’ve learned from this journey, it is time management and the sense of responsibility.”

While working, Nikabou has continued to pursue his higher education goals. He is working toward his doctorate in civil engineering at Vanderbilt University in Nashville.

“My main goal with this degree is to be able to contribute with an innovative hand to maintain and/or rebuild our already old and crumbling infrastructure, especially in USACE where nearly 75 percent of our locks and dams are over 50 years old,” he said.

Lt. Col. Sonny B. Avichal, Nashville District commander, said it is fitting for Nikabou to be recognized because as a native of Togo, he brings a unique perspective to the missions of the district.

“His desire to gain more knowledge and give back to his community led him to study engineering in the United States, a passion that still drives him as he is currently pursuing a Ph.D., at Vanderbilt University.” Avichal said. “As a civil engineer, he has brought his technical abilities to bear on a wide number of design projects for our region’s navigation and flood damage reduction missions.”

Nikabou is responsible for all structural engineering-related tasks for Cordell Hull Dam in Carthage, Tenn., as well as four dam projects within the Cumberland River basin in Kentucky. He conducts annual dam safety inspections and instrumentation evaluation as well as periodic inspections of navigation, dam and hydropower facilities. Additionally, he is serving as a design engineer for the new Soo Lock in Sault Sainte Marie, Mich., which is managed by the Detroit Engineer District. The project is a multi-district design effort for a new 110- by 1,200-foot lock to replace the existing Sabin and Davis locks at Soo Locks on the Great Lakes. The Soo Locks enable ships to travel between Lake Superior and the lower Great Lakes.

“Mr. Nikabou serves as a key role model, exemplifying excellence in the Nashville District’s structural section,” he said. “A very conscientious and extremely competent individual, he is passionate about bettering himself so that he can be of service to the community.”