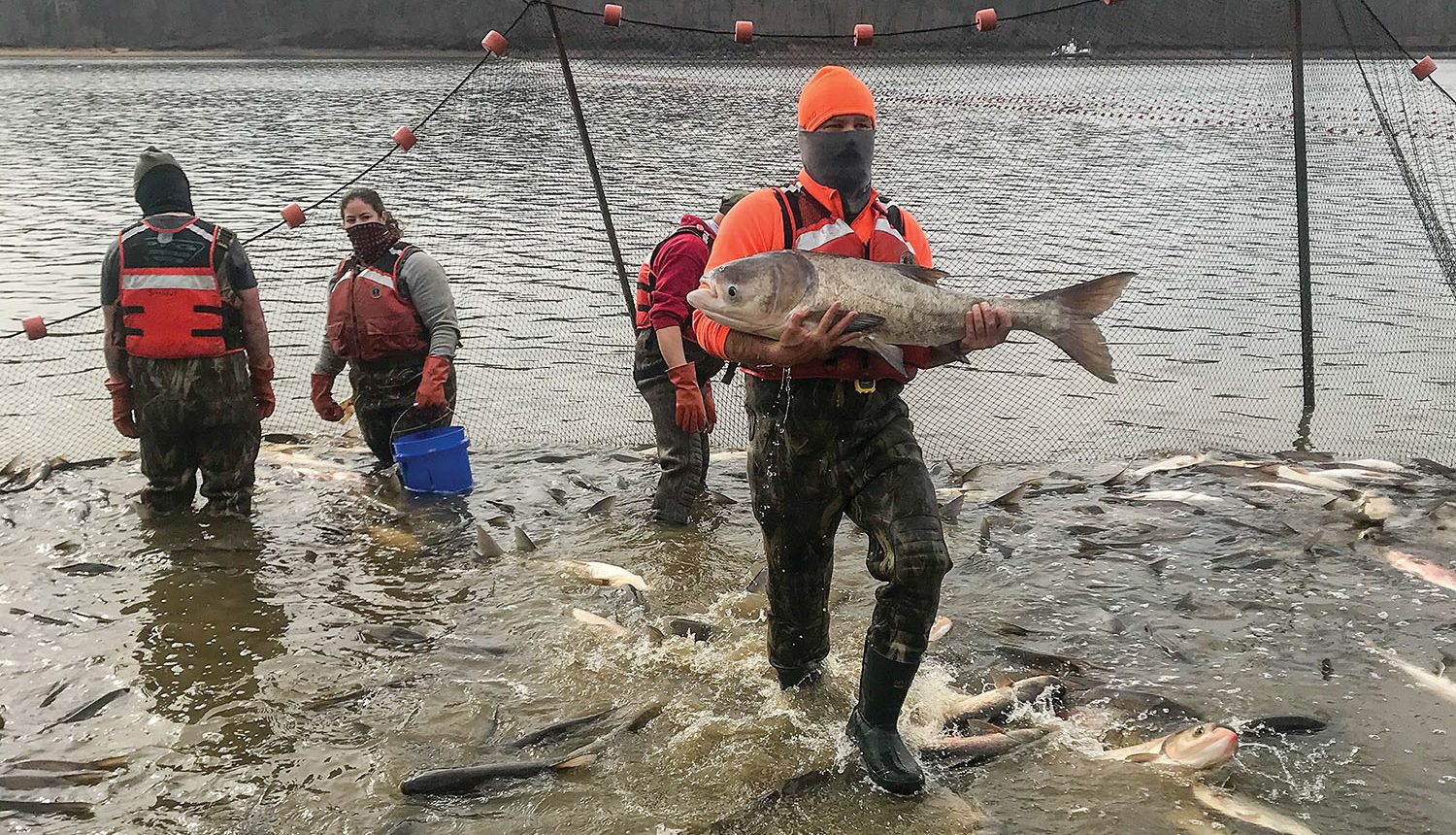 A recent research project in Kentucky Lake was designed to test how Asian carp respond to harvest methods as well as to get a better idea of the fish population.

“This is a research effort, so it’s not an effort to remove as much carp as possible,” U.S. Geological Survey (USGS) supervisory fish biologist Duane Chapman said. “What we’re doing with this effort is that we’re doing some experiments that let us understand how the fish react to being driven.”

The USGS, in partnership with the Kentucky Department of Fish & Wildlife Resources (KDFWR) and the U.S. Forest Service, began using nets to corral Asian carp in Pisgah Bay in mid January, with further tests continuing through February in Pisgah and Smith bays.

KDFWR posted on its Western Kentucky Fisheries page reminders that the bays were closed to boaters and that additional areas might have limited access during the experiments.

“The goals of the project are to determine [the] effectiveness of the Modified-Unified Method, [and the] response of tagged fish to nets and driving techniques and testing the precision and accuracy of acoustic methods to measure fish abundance,” the post read, in part.

The Kentucky Department of Fish & Wildlife resources also noted that as part of the research project, team members removed 38,000 pounds of Asian carp from Pisgah Bay in January. The Asian carp were turned over to processors. Very few native sportfish were caught in the nets, Chapman said, but those that did were released just outside the study area.

“We’re getting good data on how the fish are responding to being driven,” he said.

Special buoys record the positions of tagged fish, boats and nets for data that can be displayed on a map afterward, indicating how fish responded to trials using various techniques.

A depletion study assists researchers in calculating how many Asian carp are in each of the bays. That work is completed, in part, by doing multiple sweeps of the bays during the research period. A block net prevents the carp from escaping into the lake’s main channel. Meanwhile, researchers drive the fish from the shallow end of the bay toward a 300- by 500-foot collection area where all debris has been removed from the lake bottom.

“Fish in the wild are really, really hard to count,” Chapman said. “It’s not like if you’re a bird watcher and can see them.”

At the same time, he said, getting a reliable population count is important.

“One of the first things that people who are potential harvesters of fish want to know is, well, how many fish are there out there?” he said.

That can make the difference in whether they spend their time and resources in setting up to harvest fish in that location or whether they choose to go somewhere else, Chapman said.

Again, Chapman stressed that the work being done now is not like the carp roundup that took place last year in the same bays.

“It isn’t really necessary that we catch 100,000 pounds of fish to complete our study and, in fact, if we have too many fish it’s going to slow us down,” he said.

Ultimately, Chapman said, the work being done now could help determine what methods to use both to prevent the spread of the invasive fish species into other bodies of water as well as how best to eradicate them or prevent the growth of the population where they already are established.

“This is all about development and evaluation of tools to control these fish,” Chapman said.

He added that he expects some results of the research could be available as soon as late summer.

Caption for top photo: Jesse Fischer carries a bighead carp, one of four species of the invasive Asian carp, during USGS experiments in Kentucky Lake’s Pisgah bay. The bighead carp are far less populous than the silver carp, which were most of what were netted during the research. Part of the work involves a depletion study to determine Asian carp populations in the studied bays. (Photo courtesy of U.S. Geological Survey)