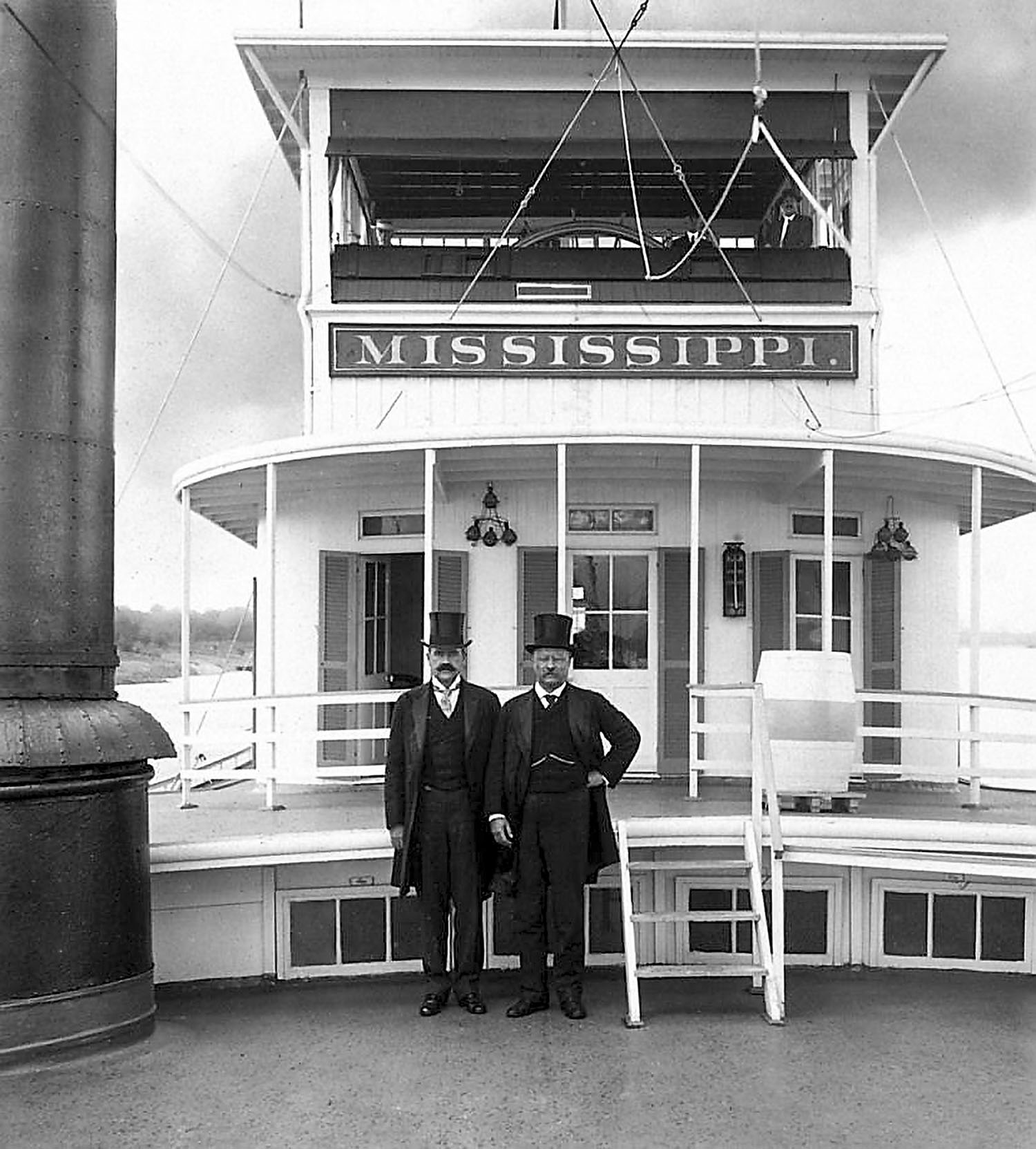 Roosevelt Rode The Str. Mississippi No. 1

In 1907, the steamer Mississippi led a parade of steamboats into Memphis with a special guest aboard. After spending the entire day of October 2 in St. Louis, President Teddy Roosevelt departed shortly after 4 p.m. aboard the Mississippi as part of a convention of the Lakes-to-Gulf Deep Water Association.

In this week’s Old Boat Column image, taken nearly 114 years ago, Roosevelt posed on the hurricane deck near the pilothouse with Lt. John Mcllhenny (Spanish-American War) from Avery Island, La.

Leading a flotilla of riverboats out of St. Louis, the Mississippi was followed by the Lily, Col. Mackenzie, W.R. King, Mark Twain, Alton, City of Saltillo, Bald Eagle, Columbia, City of Providence, Chester, David Swain, Illinois, Grey Eagle, Belle of Calhoun, Cape Girardeau, Omaha and the City of Memphis. All of the boats did not remain in the procession; about half of them turned around opposite Jefferson Barracks and resumed their regular duties in packet and excursion trades. At dinner time, the Mississippi came alongside the Eagle Packet Company’s elegant sidewheel steamer Alton, where the president and his party enjoyed sharing the evening meal with the Alton’s passengers, composed mostly of governors from various states throughout the Mississippi Valley.

Reportedly, only one bad incident marred the otherwise spectacular presidential excursion. The Ohio River towboat Fred Hartweg, which joined the parade at Cairo, had aboard a group of prominent Pittsburgh rivermen. The Hartweg was handled in a manner that was annoying to the commander-in-chief and, after his return to Washington, he sent a wire that either the master or pilot responsible for what he deemed “reckless navigation” should have his license temporarily suspended. It was later disclosed that the pilot on watch at the time had his license revoked for 60 days; the only time on record of a riverman receiving a presidential reprimand.

The river parade was so successful that, two years later in 1909, President William Howard Taft led a steamboat procession from St. Louis to New Orleans promoting interest in deeper waterways.

The boat escaped serious damage when, under the command of Capt. Grant Marsh, it was at St. Louis for the cyclone of May 1896.

By 1919, the steamboat was transferred to the U.S. Army Corps of Engineers at West Memphis, Ark. At that time, a second steamboat Mississippi was placed into service, and the name of the first Mississippi was changed to Piomingo; it remained in the government fleet until 1925. Later sold and stripped down to the hull, it was used as a barge at the Warner & Tamble landing as late as 1961.

The roof bell from the Mississippi was used on all three of the government steamboats to bear the name as well as its two diesel successors. Today it continues ringing over the rivers aboard the Mississippi V.