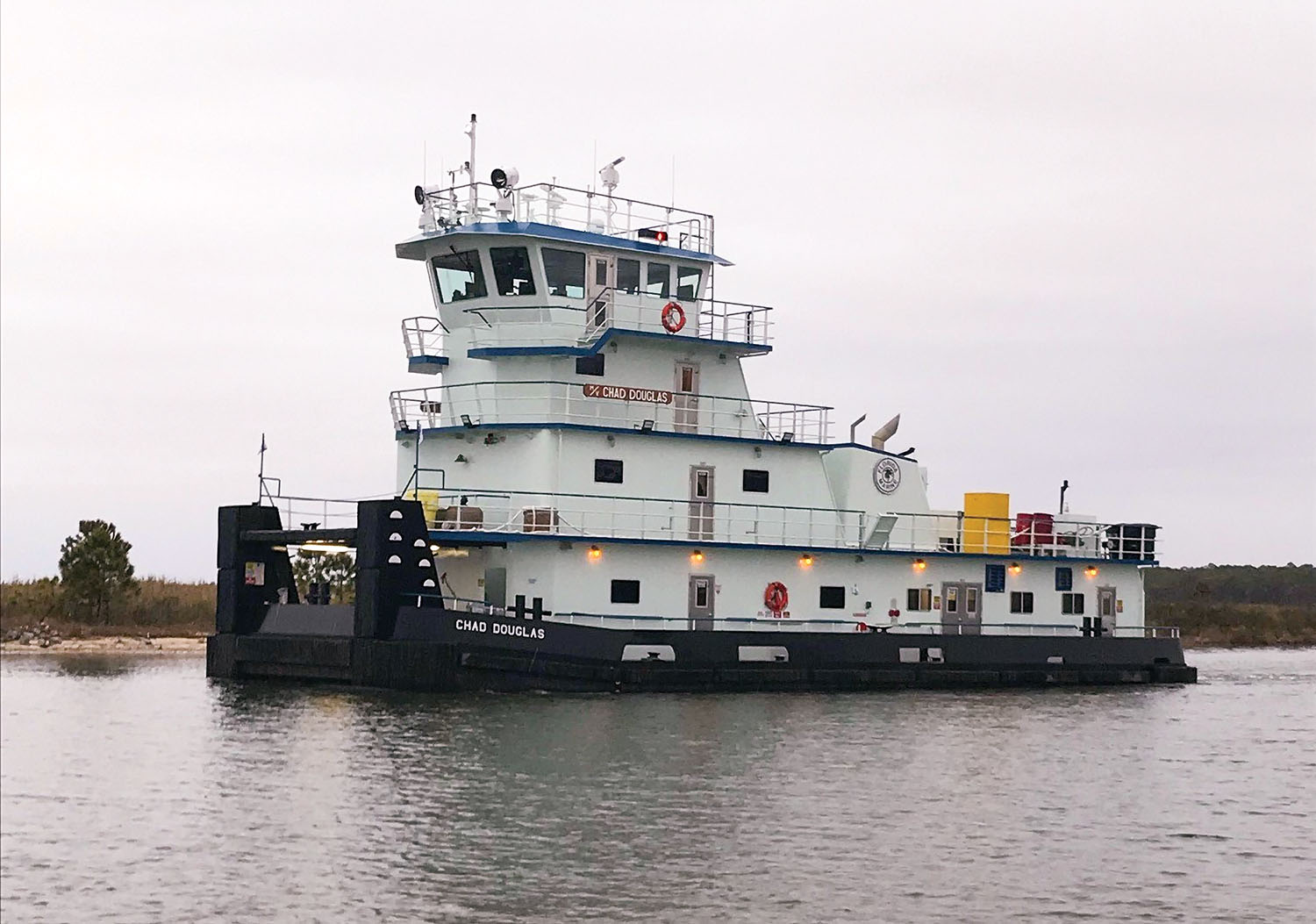 While the pace has slowed somewhat due to COVID-19, construction of the 11 boats that are being built at Steiner Shipyard for Florida Marine Transporters (FMT) is “progressing as expected,” said Jeff Brumfield, FMT’s director of vessel engineering and construction. Seven were remaining to be completed as of the middle of March.

Tara Steiner Marshall, president of Steiner Shipyard, has been working closely with Brumfield to coordinate the deliveries. “It’s a fluid situation dependent upon many variables, including the pandemic,” she said.

One of the two 2,520 hp. boats recently delivered is the mv. Chad Douglas. It is worthy of mention because it is the first FMT boat to utilize heavy-duty Mitsubishi main engines, Brumfield said.

The Chad Douglas, designed by Sterling Marine, is a conventional twin-screw towboat that measures 88 by 35 by 11 feet. When fully loaded with fuel and water (42,000 gallons and 8,000 gallons) the boat draws 8 feet, 6 inches. The pilothouse eye level is 34 feet, 6 inches.

The Mitsubishi engines are model S12R Tier 3 units with a mechanical governor control system, individual heads, inspection ports and heavier blocks. Brumfield commented that FMT has been very pleased with the engines’ overall performance and ease of maintenance. They were furnished by Laborde.

The engines are coupled to Twin Disc MGX-5600 reduction gears with a 6.04:1 ratio from Sewart. They turn Kahlenburg 82- by 62-inch propellers on 8-inch shafts with Simplan tailshaft seals and Duramax Cutlass bearings. The engines are cooled by Fernstrum keel coolers and monitored by an alarm system from EMI, which also provided the electric-over-hydraulic steering system.

Auxiliary power for the new boat is produced by a pair of John Deere 99 kw. generators furnished by Kennedy Engine Company. There are quarters for a crew of seven made up of two double and three single bunkrooms plus three bathrooms. An exercise room, fully furnished lounge and all-stainless-steel galley provide additional comfort for the crew. The deckhouse interior was manufactured and installed by Kern Martin, and it is insulated throughout with mineral wool and Mascoat sound-deadening coating in strategic locations.

Air conditioning and heating is provided by a Mitsubishi split system, fire safety is achieved through a Novec system from Hiller Systems, and fendering is Schuyler. The Chad Douglas has two Patterson 40-ton electric winches. Its electronics suite was supplied and installed by FMT’s in-house IT/electronics department.

Chad Douglas, the namesake, is a logistics coordinator at Florida Marine. The next 2,520 hp. boat, which is due to be delivered in mid-April, will be named MO Chiasson after one of FMT’s port captains, Brumfield said.