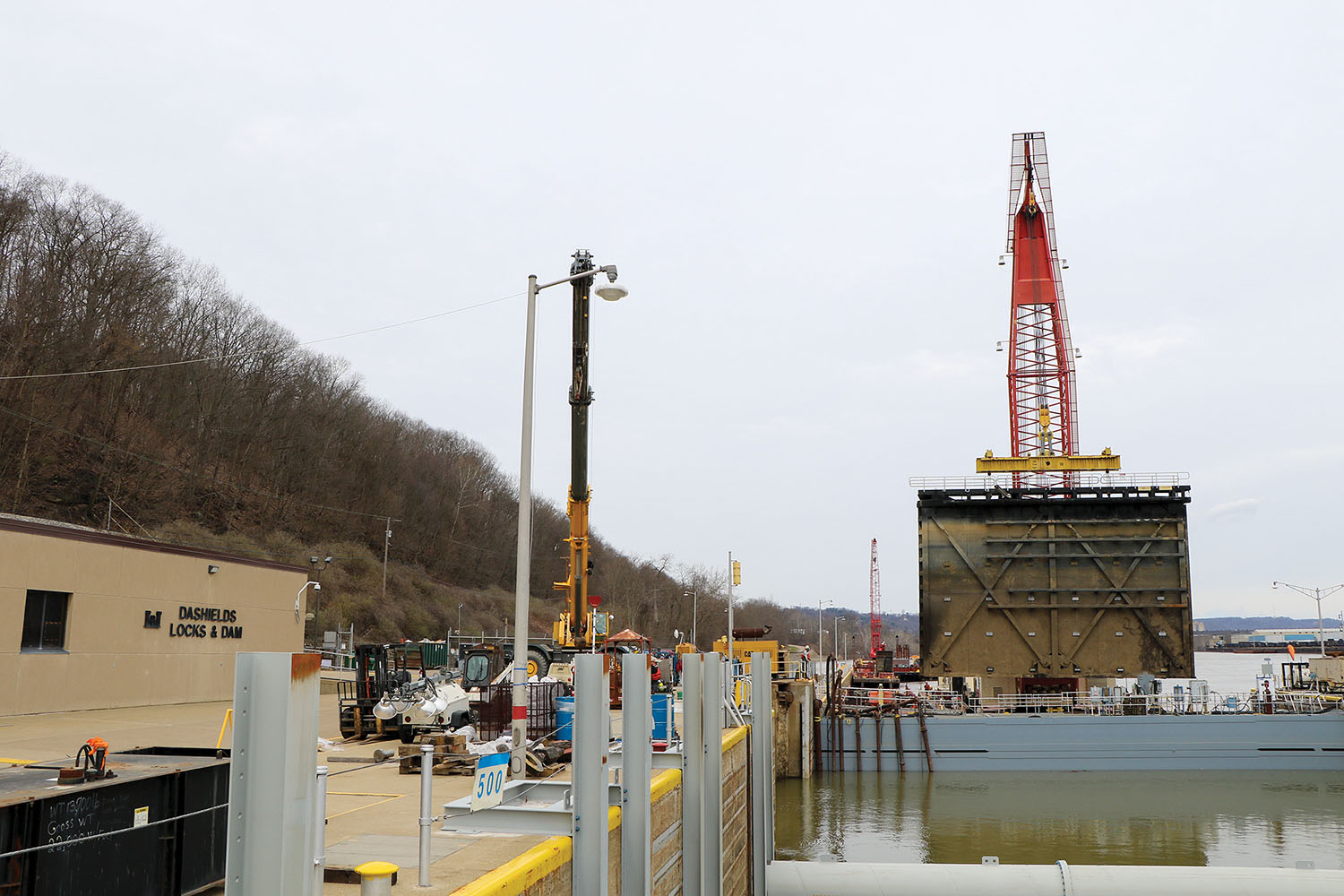 With a $22 million boost for pre-engineering, planning and the beginning of construction, a long-awaited Ohio River infrastructure project is moving forward more rapidly.

“They are the oldest and smallest on the Ohio,” said Chris Dening, the Pittsburgh Engineer District’s project manager for the Upper Ohio Navigation Project, referring to the three navigation locks and dams. “They were built in the ‘20s and ‘30s and really are reaching the end of their functional life.”

Construction of the new lock chambers was approved by Congress in 2016, with some funding for pre-construction and design activities beginning in 2017. However, funding remained limited. In January, Congress passed an appropriations package that allowed the project to receive $22 million in work plan funding to carry out more in-depth design analysis, acquisition of necessary real estate and the ability to solicit for and award the first small construction contract at the Montgomery Locks.

U.S. Rep. Conor Lamb noted in a news release about the appropriation that all three locks are more than 70 years old and at serious risk for failure, which would effectively close the entire Port of Pittsburgh, negatively impacting industries that are essential to the region and thousands of jobs.

“The potential shutdown of our inland waterways system because of a failure of our aging system of locks and dams is very real and would be catastrophic,” Lamb said.  “It is critical that we invest in infrastructure projects to protect our economy and create good jobs. This award is an important first step, and I will continue to work in Washington to ensure that the funding is in place to complete this project.”

Mary Ann Bucci, executive director for the Port of Pittsburgh Commission, noted that the projects are important for the continued success of river-related jobs in the region.

“The Ohio River is a major part of our nation’s inland waterways’ navigation system, and all three locks in the Pittsburgh District on the Ohio are old and need to be rebuilt,” she said. “To get this new start classification and initial funds dedicated for the Montgomery Lock near Beaver, Pa., is a big deal, especially to the more than 76,000 jobs in the region that are dependent on a reliable and efficient inland waterways system, and we are very appreciative to Congressman Lamb for lining up this project and making it happen.”

The Pittsburgh district was allocated the funding toward the project January 19 as part of the Corps of Engineers’ Fiscal Year 2021 Work Plan.

“Appropriate funding of the Upper Ohio projects will ensure the region is prepared for increases in industry, when and if it happens, while maintaining and improving our vital water resource infrastructure,” Col. Andrew “Coby” Short, the Pittsburgh Engineer District’s commander, said.

The Emsworth, at Ohio River Mile 6.01, Dashields at Ohio River Mile 13.3 and Montgomery at Mile 31.7 form the head of the Ohio River Navigation System as the first three locks and dams just below Pittsburgh Point. Roughly 20 million tons of commodities pass through the locks at the three sites, including coal, aggregates, petroleum and chemicals that support the region’s industries.

The Emsworth locks have been operational since 1922, although the original dams were rebuilt into gated structures and have operated since 1938. Dashields and Montgomery locks and dams have been in operation since 1929 and 1936, respectively. They make up the oldest remaining locks and dams to be addressed in the post-1955 Ohio River modernization program. Rehabilitation work in the 1980s and 1990s successfully extended the original 50-year expected functional lives of the locks and dams, but more extensive repairs and modernization are now required, Dening said.

Built prior to air-entrained concrete, all three sites have experienced structural fatigue of the concrete, causing unreliable structural capacity of the lock walls. Also, none of them meet modern design criteria.

Although the primary project purpose is to address condition issues at the three facilities, the 56-feet-by-360-feet auxiliary chambers are now also well below the size required to accommodate modern tows. The project will expand the existing auxiliary chambers to 110 feet wide by 600 feet long, the same size as the existing main chambers, allowing tows to transit the locks more quickly, saving time and money.

As one barge can carry the same amount of bulk cargo as 15 jumbo railcars or 58 tractor-trailer loads, the project is both environmentally friendly and economical, Carol Vernon, public affairs chief at the Pittsburgh Engineer District, said. Over the next 50 years, the Corps has estimated that the Upper Ohio River locks will facilitate the transport of 15 to 20 million tons of commodities annually, providing average annual benefits of nearly $150 million to the nation.

Not replacing the aging structures could have deleterious effects, the Corps has repeatedly noted.

“If we don’t do something, we’re going to have a condition out there that causes failure at the facility, and that would stop traffic, and that would stop those benefits from accruing,” said Stephen Fritz, mega-projects program manager for the Pittsburgh Engineer District, referring to the increased likelihood of unscheduled closures and potential failures that could shut down the river to navigation.

The project is designed to keep river traffic flowing during construction, preventing costly disruptions. Tows will be able to continue to transit the existing main chambers at each site while the new chambers are being constructed. One of the first steps of the project is to build a scale model of the Montgomery Locks and Dam at the Engineer Research and Development Center in Vicksburg, Miss., Dening said. Construction will start first at Montgomery before moving to Emsworth and finally to Dashields.

Dening estimated it could take 8 to 10 years for the construction at Montgomery, although he added, “We haven’t finished the design yet, so it’s kind of hard to know for sure the exact construction duration we might be looking at.”

Additionally, he said, weather, including high water, could impact the construction timeline.

The work at the other project sites should take a similar timeframe.

Fritz added that the Corps expects to award its first small construction contract at Montgomery before the end of the calendar year.

The appropriations package was an important boost to getting the project started, he said, adding that the Corps’ overall capital investment strategy hadn’t expected major funding for the Upper Ohio Navigation Project until roughly 2024.

The nearby Lower Monongahela Project being fully funded through completion and a change in the cost-share ratio from 50 percent federally funded and 50 percent from the Inland Waterways Trust Fund to a 65/35 split for new construction and major rehabilitations contained in the 2020 Water Resources Development Act also helped the Upper Ohio project to move forward more speedily. The Lower Monongahela Project will continue to receive funding through 2024, although it will stretch into 2025 before wrapping up.

“This project has been in the queue, waiting for funding to become available through the overall strategy to fund these projects,” Dening said of the Upper Ohio Navigation Project.

He also mentioned ongoing projects at Kentucky Locks and Dam and Chickamauga Lock and Dam that are already under construction. “Now we’re next in line to start getting some substantial funding to move the project forward,” he said.

Caption for top photo: The Corps of Engineers’ heavy lift derrick boat lifts one leaf of the downstream main chamber miter gate for repairs in 2018 at Dashields Lock and Dam on the Ohio River. Auxiliary chambers at Dashields, Montgomery and Emsworth locks and dams will be replaced as part of the Upper Ohio River Navigation Project. (Photo courtesy of Pittsburgh Engineer District)