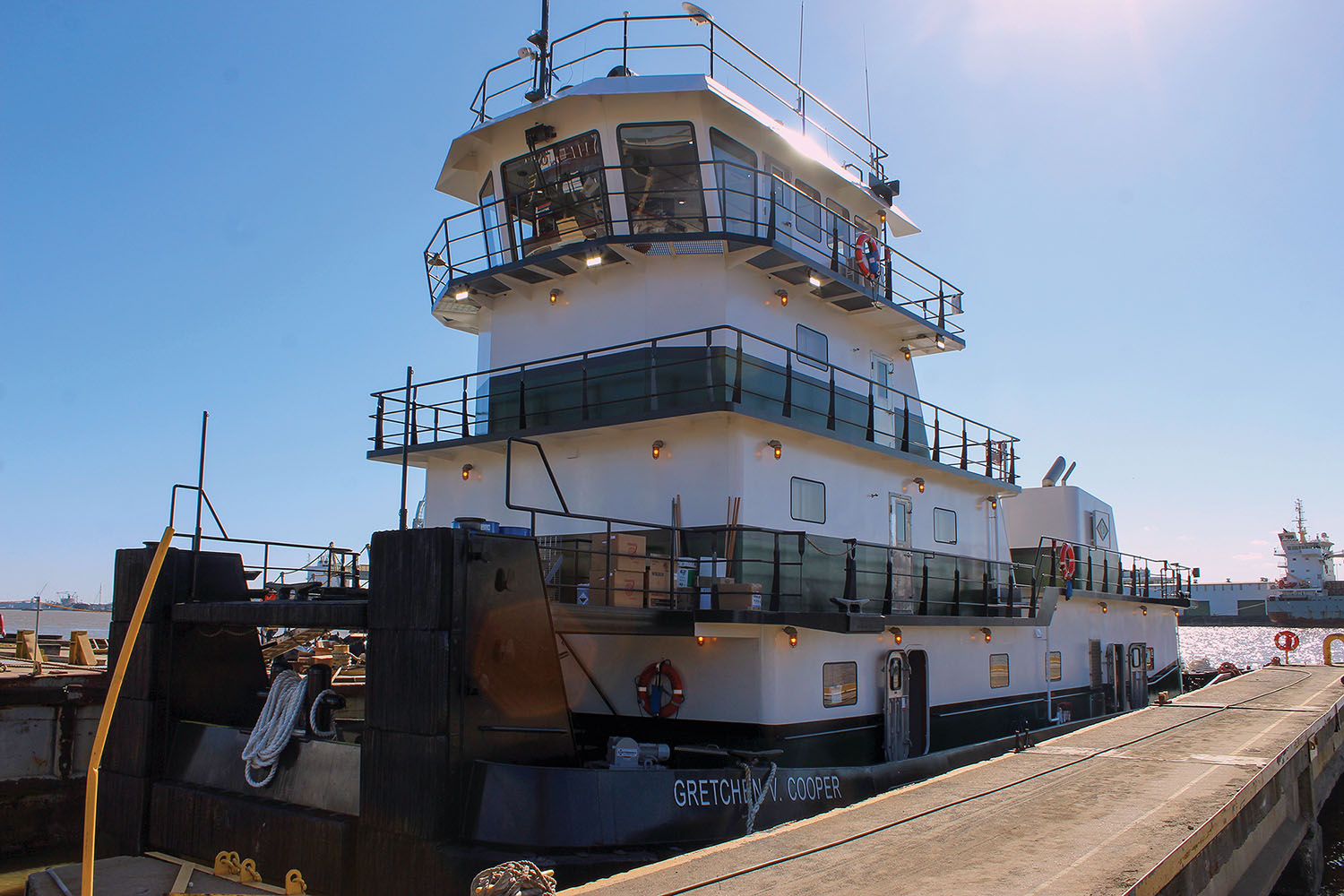 Both Blakeley BoatWorks and Cooper Marine & Timberlands are headquartered within the Port of Mobile, Ala.

The mv. Gretchen V. Cooper measures 110 feet by 33 feet, with a maximum draft of 8.5 feet. The vessel offers 3,400 hp., courtesy of its two Caterpillar C3512E main engines from Thompson Caterpillar.

Tier 4 engines offer a significant reduction in emissions of particulate matter and nitrogen oxides to near zero. According to the companies, Tier 4 engines in applications like marine vessels can reduction emissions by 86 percent or more. Cooper/T. Smith President Angus R. Cooper III said Blakeley set the bar high when it came to building the Gretchen V. Cooper.

“Our customers expect Blakeley BoatWorks and Cooper Marine & Timberlands to drive industry innovation, and our building and operating one of the industry’s most environmentally-friendly towboats marks our unwavering commitment to always exceed their expectations,” said Angus R. Cooper III, president of Cooper/T. Smith. “Naming a boat after my wife, Gretchen, meant that we couldn’t just settle for building a standard towboat, and therefore, the mv. Gretchen V. Cooper will be one of the most powerful towing vessels operating on the Tennessee-Tombigbee Waterway and will lead the way for a new industry standard for reduced emissions on towboats.”

The mv. Gretchen V. Cooper has tankage for 44,200 gallons of fuel and 10,000 gallons of potable water. The vessel can accommodate a crew of eight, spread across six staterooms and four full bathrooms and a half bath.

With the addition of the mv. Gretchen V. Cooper, Cooper Marine & Timberlands’ fleet of towboats now stands at 20. The fleet operates on the Tennessee-Tombigbee Waterway; the Tennessee, Tombigbee, Mobile, Black Warrior, Cumberland, Arkansas, Illinois and Mississippi rivers; and the Gulf Intracoastal Waterway. The company also operates more than 400 hopper barges and one of the country’s largest fleets of dry bulk gantry and floating derrick cranes. The company has two deep-draft bulk cargo terminals within the Port of Mobile, along with numerous other inland marine terminals in Alabama and Mississippi.

Blakeley BoatWorks is located on 26 acres in the Port of Mobile, with the capacity to service up to 15 towing vessels and barges simultaneously. The full-service shipyard specializes in small vessel repair, barge repair and new vessel construction. The yard offers a 1,900-ton floating drydock, a 660-ton travel lift and four covered fabrication shops.

“Our team is proud to be part of the construction of the Gretchen V. Cooper,” said Swathin Kannalath, managing director of Blakeley BoatWorks. “Delivering one of the first Tier-4 linehaul vessels in the country presented an exciting challenge for the Blakeley team, and we delivered with this vessel, meeting not only the highest industry standards but also exceeding our customer’s expectations.”