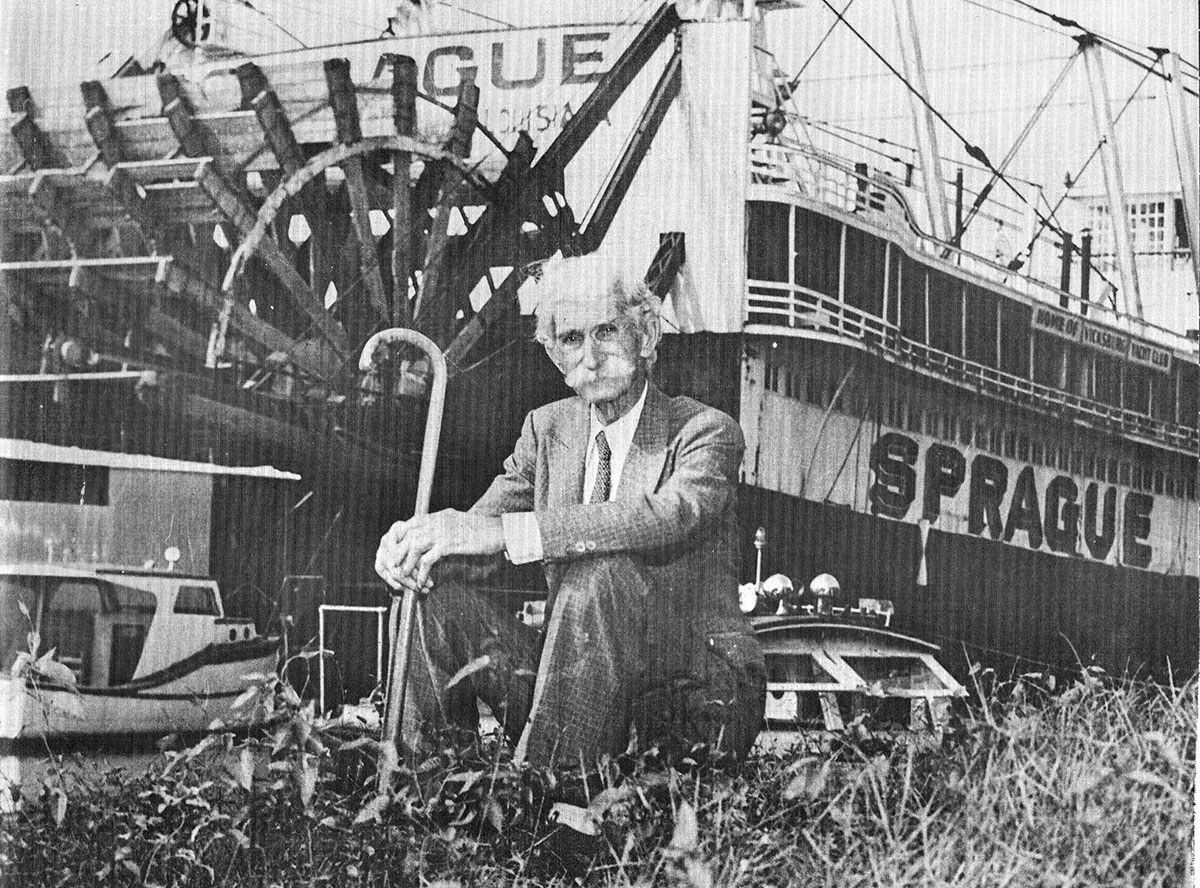 The passing of noted and beloved Vicksburg, Miss., historian Gordon Cotton (1936–2021) on March 7 has struck a blow to those who revered Cotton as a Mississippi icon. It was this writer’s pleasure to know him for several decades during his tenure as the director/curator of the Old Court House Museum. This week, in Cotton’s memory, I pay tribute to another Vicksburg legend, who recorded many fascinating river photographs for posterity.

John Mack Moore, born in 1869, was the son of prominent residents of antebellum Vicksburg. He was only a toddler when the famous 1870 race between the Robt. E. Lee and Natchez had his hometown in a state of excitement as the big sidewheelers passed upriver en route from New Orleans to St. Louis. As a young man, he became an avid and skilled photographer, spending much time at the wharf along the Mississippi and Yazoo, recording on glass plate negatives the daily activity of the busy river landing.

Conversations with masters, mates, mud clerks and roustabouts were his daily fare. Moore learned photography from an elderly master of albumen, wet plates and homemade printing papers. He had a disdain for newfangled gadgetry and held fast to utilizing the old methods of previous decades in the making of photographs, with sparkling results.

J. Mack Moore was considered the dean of photographers as well as a colorful character around Vicksburg. In later years, owing to his white hair and moustache, he was said by many to bear a close resemblance to Mark Twain.

Moore’s Clay Street home, where he also operated his photographic studio, was built from the top down, a most amazing feat accomplished by a unique individual. Originally it was a rambling residence in a Southern, park-like setting. However, when paved streets eventually came to the city, the house was left at the base of an embankment, the large oak trees removed to make way for an unsightly culvert. Singlehandedly, Moore raised the house to street level. As the edifice gradually rose, Moore fashioned lower floors, accomplishing the feat with heavy timbers and screw jacks. When the home was 12 feet above the ground, he added a lower floor and then took the whole structure up another six feet before placing the foundation timbers. The noise of street traffic so annoyed him that Moore kept his studio and living quarters for his wife and himself in the lower levels.

Each year the couple took a vacation, most often on steamboats, to the New Orleans Mardi Gras, a tradition beginning with their honeymoon.

Moore’s detailed photographs were eagerly sought by river people, historians and collectors the world over. When the huge steam towboat Sprague was retired in 1948 at Vicksburg, he donated a large number of steamboat prints for the River Hall of Fame. Following Moore’s death in 1954, the glass plate negatives were purchased by the Warren County Historical Society and accessioned by curator Eva W. Davis into the collections of the Old Court House Museum. Here they are forever preserved and available to researchers seeking images from a colorful time never to come again. Including some 1,100 plates, the photographs include scenes of not only riverboats, but everyday life in Vicksburg. In 1994, Gordon Cotton showed me some of the museum’s wondrous photo collection.

Thanks to the skilled artistry of J. Mack Moore, Vicksburg’s foremost photographer, fascinating images of such fabled steamboats as the J.M. White, America, Belle of the Bends, Kate Robbins, Natchez, Robt. E. Lee, Tennessee Belle and countless others were captured on film for the edification of generations yet unborn.

For more information on the J. Mack Moore Photo Collection and books authored by Gordon Cotton, visit the website of the Old Court House Museum at www.oldcourthouse.org.

Caption for photo: Photographer J. Mack Moore poses with the Str. Sprague on the Vicksburg waterfront in 1948. (Keith Norrington collection)