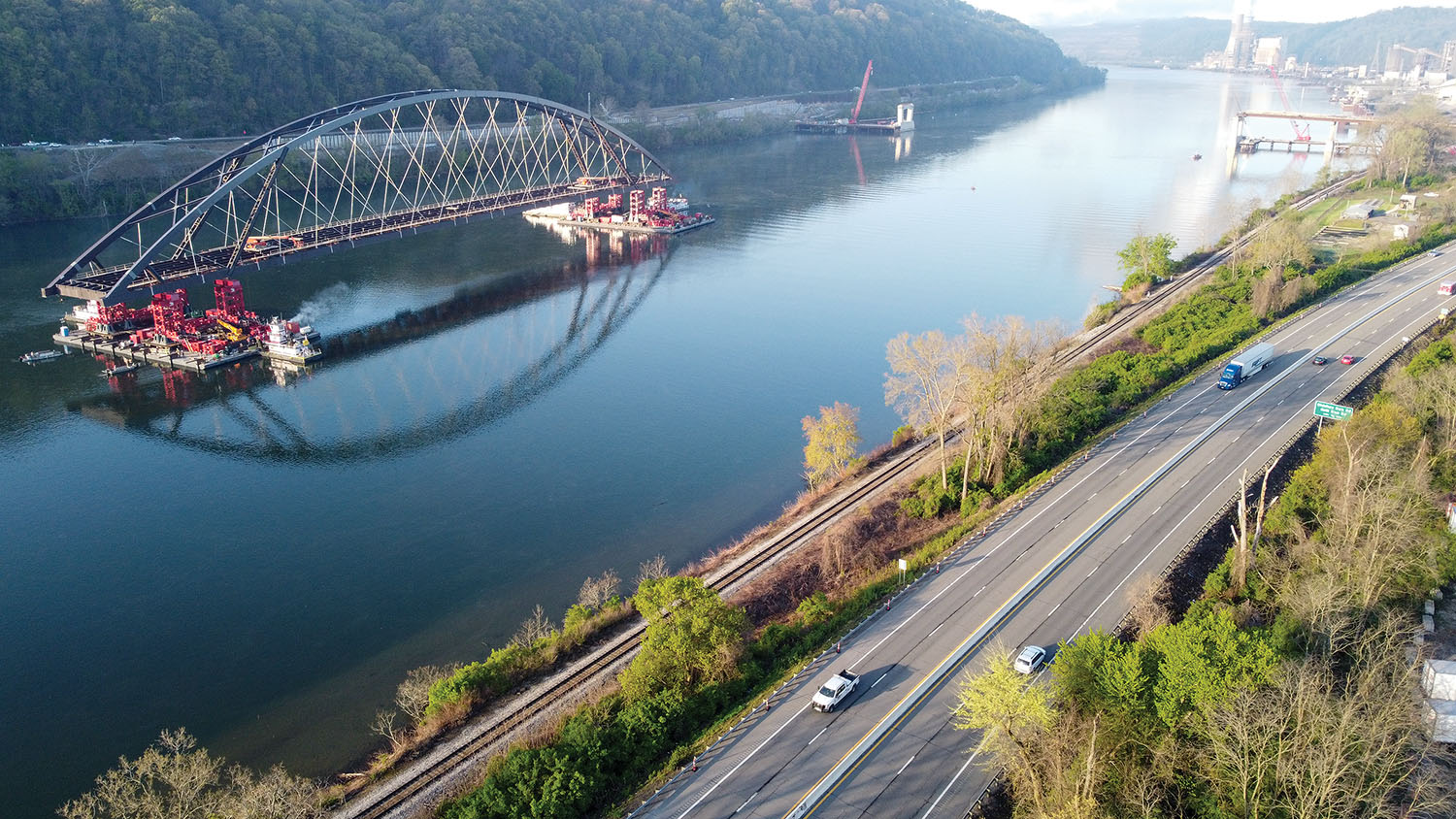 The main span of a new bridge over the Ohio River was built on the riverbank and recently floated in by barge before being lifted into place as part of a new construction technique.

“They were able to construct the arch fairly easily from the land, and then once they assembled the arch they were able to float a barge under each end of the assembly system in the yard,” he said.

Barge slips built beneath either end of the assembly yard allowed for the lift. The bridge was raised just over 20 feet above the assembly yard’s elevation, 40 feet above water, onto bracing before making the 3/4-mile trip downstream, Witherow said. The boats then turned the bridge 90 degrees and headed back upstream, at first anchoring to a pier. The bridge was then lifted another 65 feet and placed on top of the piers.

Contractor Flatiron Construction of Broomfield, Colo., came up with the idea of building the bridge on the riverbank and then barging it into place. It allowed work on the tied-arch design to begin before the piers were completed, saving time and money. The method also minimized disruption to river traffic.

“It was certainly a very interesting innovation that they incorporated into their design of this project,” Witherow said.

The bridge span weighs 4,100 tons without concrete or rebar, making it one of the heaviest lifts in North America, said Adam Lytton, field engineer for the Ohio Department of Transportation’s district 11 office.

Weather conditions turned out to be the most challenging part of the lift. An extended dry period at first left the water too low to lift the bridge on the barges in the slips, but timely rainfall and coordination with the Corps of Engineers to maintain the pool level so the bridge could be lifted worked well, Witherow said.

Lytton added that the bridge had been expected to be floated downstream one day and lifted a second day, but a change in the wind condition forecast meant the entire float in and lift were accomplished in a single day. Wind speeds had to be below 10 mph. for an extended period with gusts no more than 15 mph. and river speed at less than 2 feet per second.

“This is something new to this country, building bridges like this,” Lytton said. “It went extremely smoothly for everything that was involved.”

He added that years of planning went into the move.

The $131 million bridge project is a joint effort between Ohio and West Virginia, with West Virginia owning the main span and Ohio providing funding for three approach spans and a bridge over an existing state route.

The bridge is expected to open to highway traffic in fall 2022. It connects State Route 2 at Wellsburg, W.Va.,  with a new State Route 702 at Brilliant, Ohio.

Caption for photo: Towboats from Excell Marine move the main span of the new bridge between Wellsburg, W.Va., and Brilliant, Ohio, down the Ohio River on barges April 26. (Photo courtesy of the Ohio Department of Transportation)