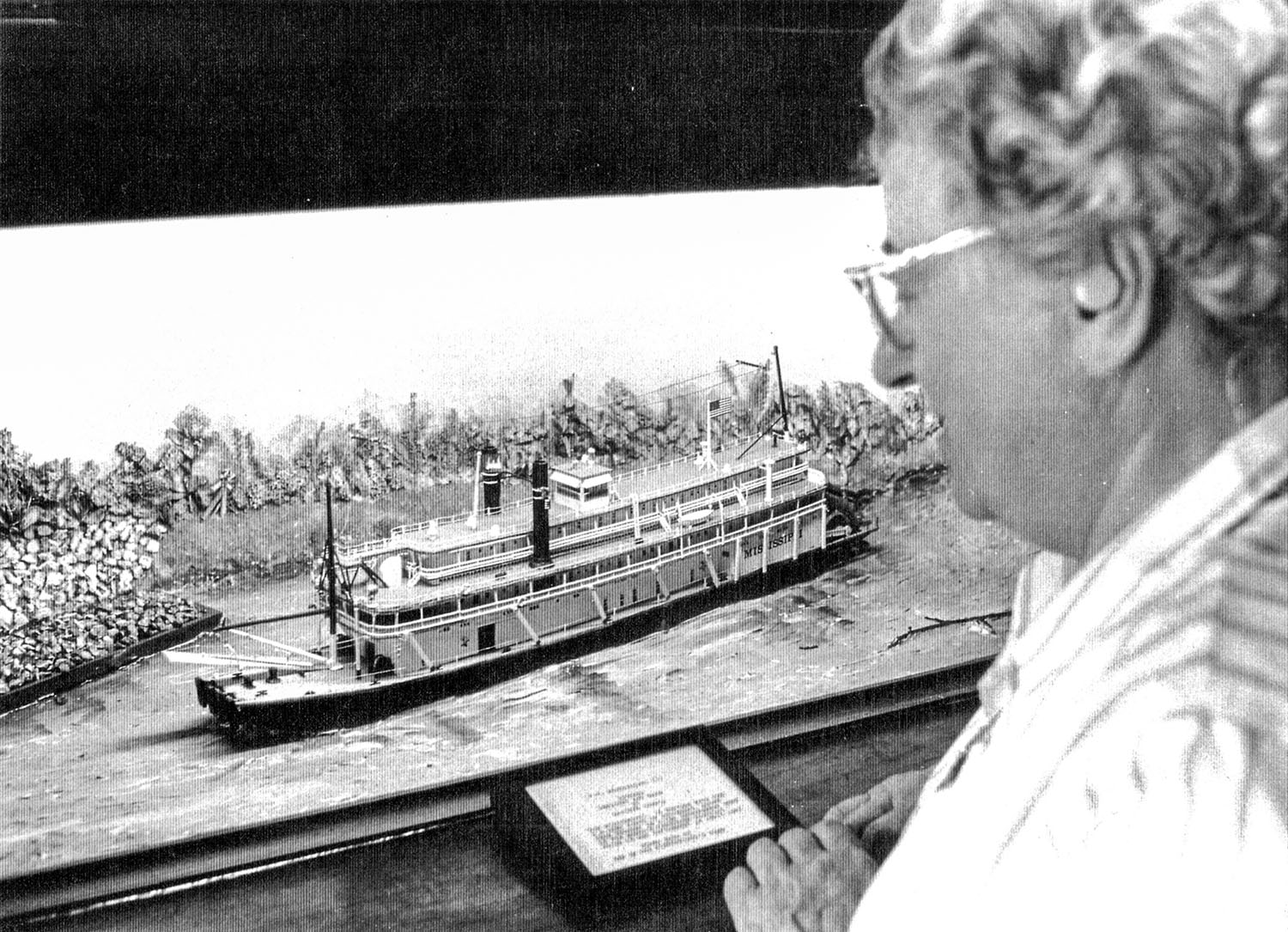 When Frank Pierson purchased the steamer Mississippi (then a tourist attraction moored opposite Hannibal, Mo.) in early 1966 and brought it to St. Louis to replace his sunken Becky Thatcher, he envisioned a first-class steamboat museum on board and prevailed upon Ruth Ferris, St. Louis’ esteemed river historian and recently retired curator of the Missouri Historical Society’s River Room, to design it. Ferris eagerly accepted the opportunity to work on her beloved levee and later recalled the experience as the highlight of her longtime river interest.

“Looking out one door of the boat all day long at the mighty Mississippi and Eads Bridge and out the other door at the magnificent Gateway Arch made my thoughts and spirit soar above everyday things,” she said.

Many of Ferris’ former students from her 35-year teaching career and their children (whom Miss Ferris jokingly referred to as her grandchildren) visited her aboard the Becky. The museum officially opened 52 years ago on April 12.

Appropriately named the Midship Museum, it was a true steamboat lover’s dream, occupying a large room on the main deck of the big sternwheeler and adjoining the engineroom, where the 1926 Gillett & Eaton engines and other machinery remained intact. A gift shop occupied the area immediately forward of the museum along with the O’Brien watertube boilers, which were removed in late 1969 to make space for “The Boiler Room Bar.” For a fare of 50 cents for adults and 25 cents for children, visitors viewed the museum room and then were led by guides into the engineroom, up through the cabin and on up to the hurricane and texas decks, with a pause at the stern to peek at the 24-foot sternwheel and monkey rudders, before ascending to the pilothouse with its 8-foot pilotwheel, engineroom telegraph and elevated lazy bench. Tourists were then taken back downstairs to shop for souvenirs and offered the option of a harbor cruise on the small excursion boat Mississippi Belle (operated by Capt. Art Denkmann) for $1!

Through the courtesy of Fred H. Leyhe and William H. Leyhe, sons of the famous Capt. Buck Leyhe, many river relics exhibited in the museum came from the abandoned Eagle Boat Store building on Wharf Street, which Pierson had recently leased to become “The Old St. Louis Levee House.” These included a 6-gallon coffee maker from the Str. Golden Eagle, Capt. Buck’s megaphone and mahogany rolltop desk; the boat store manager’s stand-up clerk’s desk; a section of the boat store counter; and shelves filled with various marine hardware including red, green and amber globes for running lights.

Every space in the neatly organized room largely exhibited relics from the Eagle Packet Company and Streckfus excursion boats. One section of the room was devoted to the Goldenrod Showboat, displaying vintage signs, costumes, props, a 20-inch frying pan used to feed the crew and troupe, and colorful melodrama posters. Also displayed were the klieg light that spotlighted the stage when the showboat was built in 1909 and the roof bell from the towboat Wenonah, the last sternwheeler to push the Goldenrod from town to town until it was permanently moored at St. Louis in 1937.

Other displays, some provided by captains and crews on the waterfront, included monkey fists, life floats, round-bottomed fire buckets, paddlewheel parts, cabin arches from the Erastus Wells and mirrored cabin doors and chandeliers from the steamer Cape Girardeau, later the Gordon C. Greene. Wallbooks on port and starboard bulkheads contained large, swinging glass-enclosed pages of river memorabilia showcasing the history of the steamer Mississippi and its work for the U.S. Army Corps of Engineers from 1927 through 1961. Children of all ages enjoyed pulling the braided cord to hear the loud jangling of the backing bell from the Streckfus sidewheeler J.S. De Luxe.

Although Ferris, the sparkling museum and even the Becky Thatcher are now but fond memories, the Midship Museum with its enchanting steamboaty atmosphere will always remain—especially in the opinion of this writer—the best riverboat museum of all time. As curator Ferris often justifiably and proudly said, “This is the real thing; a riverboat museum on a riverboat on a river!”