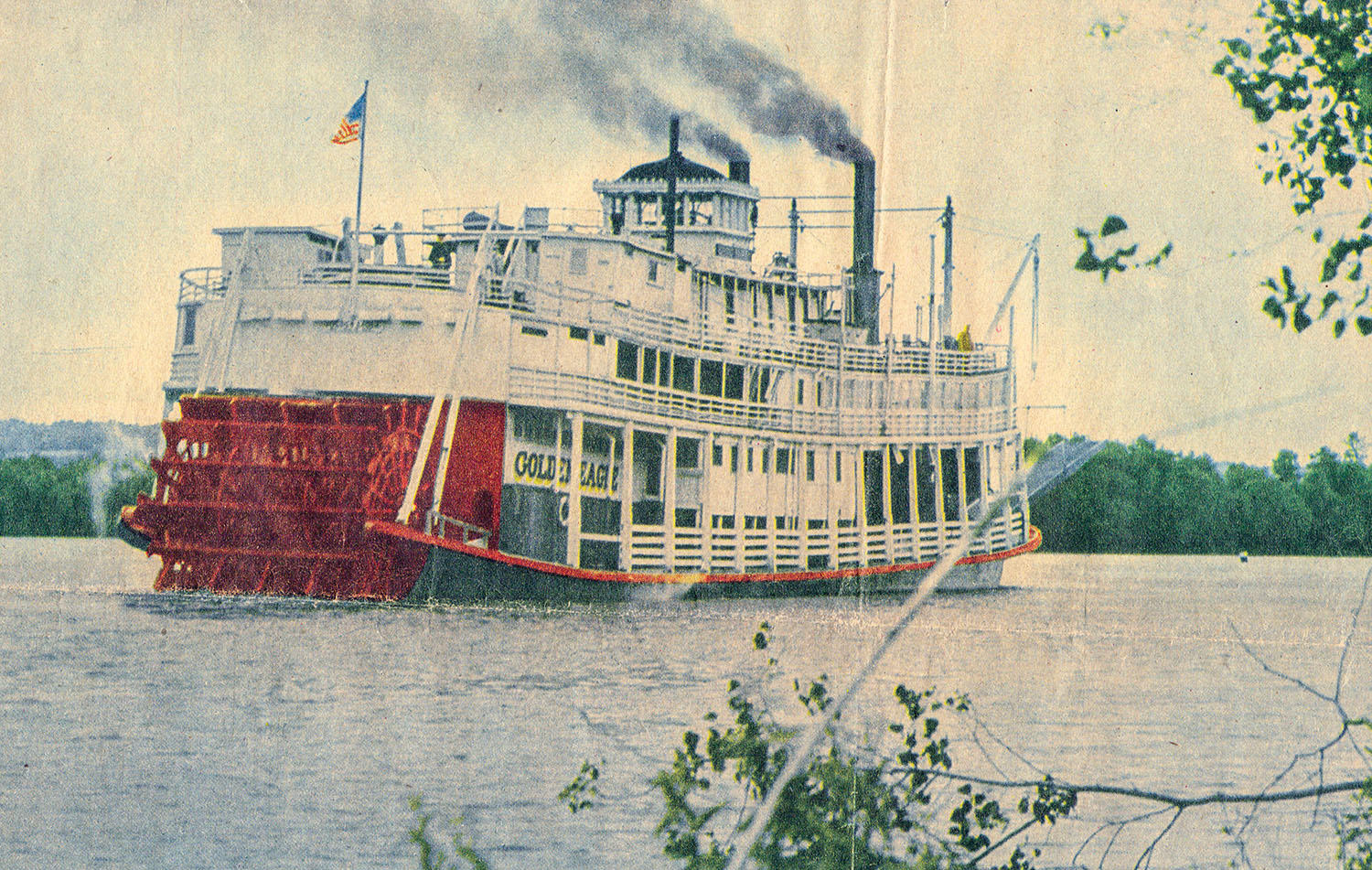 The Str. Golden Eagle Was A St. Louis Favorite

With the spotlight on St. Louis for this week’s eighth annual Inland Marine Expo, the Old Boat Column presents a riverboat that was a favorite of the host city.

Never in a class with the palatial sidewheelers such as the J.M. White and Grand Republic, the Golden Eagle was, nevertheless, one of the best-known riverboats of all time. The sprightly sternwheeler made national news when it sank, 74 years ago this month, on May 18, 1947. With Capt. Nathan Smith at the wheel, the Golden Eagle struck a riprap revetment at the head of Grand Tower Island, 80 miles south of St. Louis, tearing a 6-foot gash in the hull. The accident was attributed to failure of the steering gear, which caused the rudders to jam.

Smith and his pilot partner, Capt. S.M. Darling, managed to get the sinking steamboat to shore, and all 91 passengers were safely evacuated onto the island.

Although the “Goldie” was in the command of Capt. L.E. Keplinger, the boat’s longtime and beloved former master, Capt. W.H. “Buck” Leyhe, was aboard as a special guest. As the darkened vessel settled and tilted, it was reported that the haunting sounds of breaking dishes, crashing to the deck as they slid from cabinets, as well as the groaning of twisting timbers, could be heard. As Capt. Buck sat in a deck chair, sadly watching his beloved boat sinking into the river, he is quoted as saying, “I would rather have thrown a thousand dollars into the river than witness this disastrous end.”

The passengers and crew spent the chilly night on the island and were rescued at daylight by the towboat Linda Chotin, which transported the refugees to the town of Grand Tower, from which they were taken to St. Louis on buses. The wreck of the steamboat was removed by the U.S. Army Corps of Engineers.

Through the persuasive, persistent efforts of Ruth Ferris, river historian and frequent passenger on the boat, the pilothouse was salvaged and purchased for the sum of $257; it was transported in early 1948 to the campus of the Community School at Ladue, Mo., where Ferris taught fifth grade for 35 years. Cleaned, repaired and painted by the students, the pilothouse was utilized as an educational tool until 1961, when it was donated to the Missouri Historical Society for display in the new River Room gallery (opened in 1962) of which Ferris was curator.

I’m glad to report, the domed and gingerbread-trimmed artifact, after 25 years of being dismantled in storage, is currently restored and back on display under the direction of curator David Lobbig.

Numerous former passengers, steamboat enthusiasts and friends of the revered riverboat formed the Golden Eagle Club, and for many years (1975–2004) operated a river museum overlooking the Mississippi at Bee Tree Park in south St. Louis.

About The Golden Eagle

The Golden Eagle was built in 1904 by the Howard Shipyard at Jeffersonville, Ind., for a contract cost of $15,035. Originally named Wm Garig, the steamboat was owned by the Baton Rouge & Bayou Sara Packet Company. The wooden hull measured 175 feet in length by 35 feet in width. The engines and boilers were recycled from the Julien Poydras.

The Garig was later owned and operated by the Carter Brothers, of New Orleans. The riverboat was sold in March 1918 to the Eagle Packet Company, St, Louis, after that firm had suffered the horrific loss of four of their packets in the ice gorge at Paducah in January of that year. Renamed Golden Eagle, the vessel was operated in packet trades on the Mississippi and Illinois rivers before being altered to become a tourist steamer.

Notable events in the life of the boat include having the honor of being the first passenger vessel to traverse the new lock and dam system on the Upper Mississippi River in 1939. A much-publicized “race against time” between the Golden Eagle on the Mississippi and the Delta Queen on the Sacramento River resulted in the “Goldie” being declared the winner.

Surviving a 1941 sinking after striking a dike at Chester, Ill., the vessel operated until 1943, when World War II prevented replacement of the boilers. Under new ownership in 1946, the boat ran a round trip from St. Louis to New Orleans before being sold to Herman T. Pott the following March. Beautifully renovated and refurbished, the sparkling steamboat departed the St. Louis levee on May 17, 1947, on what would be its first and final trip of the season.