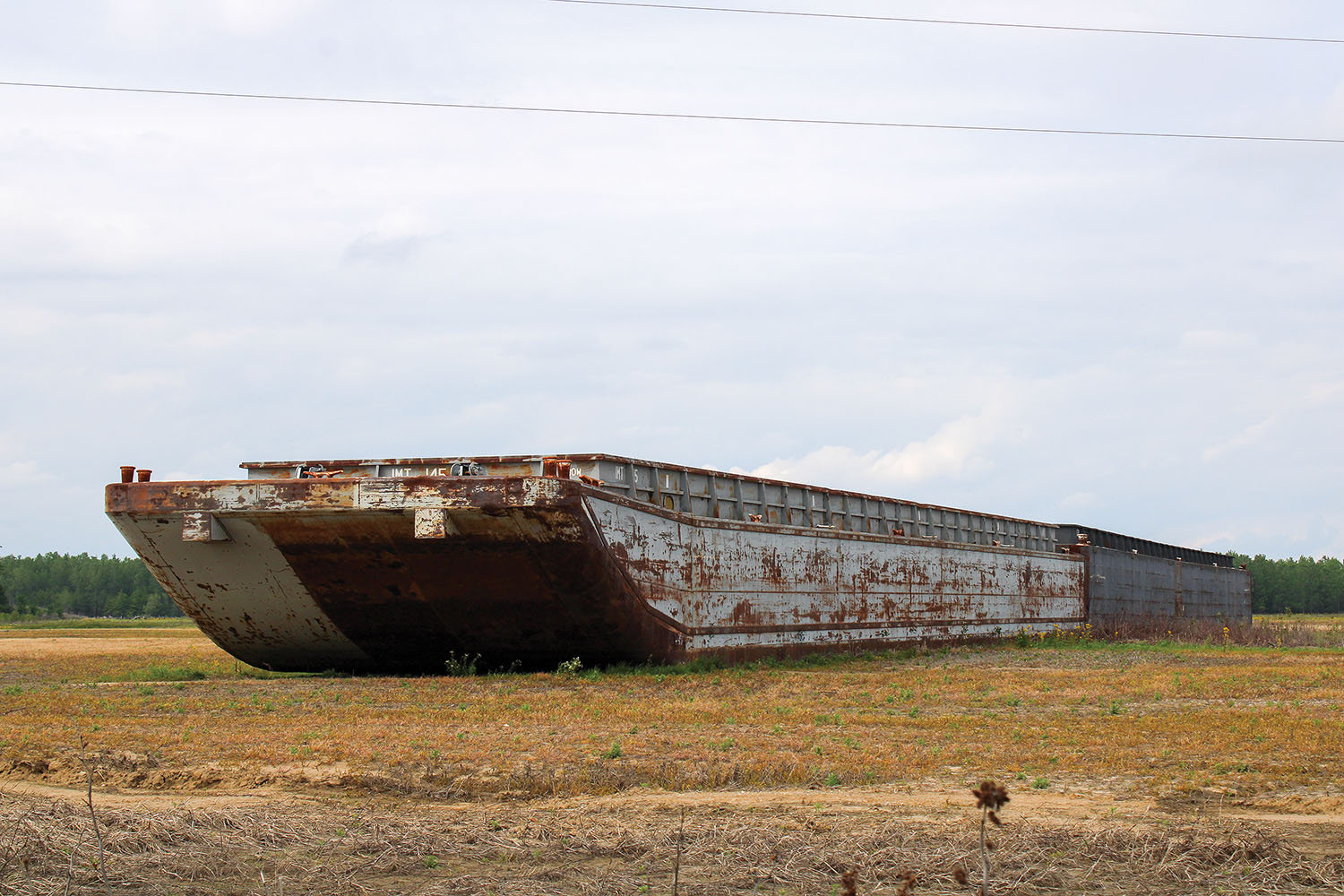 Barges Remain Nearly 2 Years After Flood Tossed Them In Field

Sherry Pecord gets “the question” two or three times a week at the bar and grill she owns in Olive Branch, Ill.

“Hey, are those barges still in your field?”

Nearly two years after six barges broke loose from a tow, four were sucked through a hole in the broken Len Small Levee and two floated back out, the answer is yes.

When the Mississippi River flowed back out of the hole in the levee in July 2019, the two remaining barges settled in the field just off Miller City Road in rural Alexander County, near the southern tip of Illinois.

“They just floated right on over and took out a utility pole and an irrigation rig and landed in the field right behind my house,” Pecord said.

Pecord and her husband, Sean, lease acreage from Sean’s father, Jerry, near the Mississippi River’s Dogtooth Bend. They grow corn and soybeans.

They never expected two barges to sprout up or to have to plow around them for two years.

Still, she said, you can get used to a lot over time.

“I don’t even see them anymore,” she said. “They’ve just become part of the landscape, and I really don’t pay any attention to them anymore.”

The barges gained plenty of attention when they first landed, however.

“It was kind of crazy,” Pecord said.

The story of what led to the barges’ grounding actually dates back to 2011, when a major river flood caused an initial break in the levee. Although officials fixed it, that break also led to a government buyout offer for the surrounding land. Several neighbors took the buyouts, but Sean is a third-generation farmer, and the Pecords couldn’t pack up the land. They decided not to leave the farm or the home Sean built back in 1985. They hoped for the best, living in one of five houses left in the peninsula created by the river bend.

On New Year’s Day of 2016, the Mississippi River overtopped the Len Small Levee.

“It went over the top and just broke it down,” Pecord said. “It put a 3/4-mile gap in the levee right in front of our house. Over the years, the river has just been eating that away, and it’s probably a good mile now.”

The government has determined it is not cost-effective to repair the break now. Those living in the area do so at their own risk.

The river comes up every few years, and the family has gotten used to it, although Pecord continues to talk about it every time she gets the opportunity to do so, hoping to bring about awareness of how the unrepaired levee continues to cause problems for her and her neighbors.

The latest flood was in 2019. This time the water stayed up for months. Pecord counted the days. She boated home for 137 of them. Her restaurant was closed for seven weeks during that time because it was inaccessible to customers.

The barges floated in on July 3 that year.

The next day was a holiday, the Fourth of July. The day after that, the barges’ owner, Hines Furlong Line Inc., sent representatives to take a look.

“In the next year and a half, they were trying to figure it out,” she continued. “First they were going to come in and put air bags underneath them and walk them across the road and maybe leave them on the other side and wait for the river to come back up. It’s a given the water is going to come back up because we have a mile-long breach in our levee. I don’t know what happened to that thought process, but that never happened.”
Then, she said, people came down and looked again, trying to determine what it would cost to scrap the barges.

“Planting season comes and goes, and they’re sitting in the middle of my father-in-law’s field,” Pecord said.

Eventually, she said, he started charging the barge company rent for each day the barges were in his field.

Negotiations commenced, and they came to a settlement that resulted in Hines Furlong selling the barges to him.

Farming around them is still a hassle, but “They just go around it,” Pecord said.

Although her father-in-law has welding equipment, including cutting torches, he has decided rather than cutting up the barges for scrap, he might as well wait for the water to go back up and see if he can haul them back out to the river himself. He might be able to sell them intact back to a barge company.

They might be in for a wait before the water comes back up that high, but Pecord said they decided they have the time to wait it out, and the settlement helped make up for the profit lost in the portion of the field where they are unable to plant.

That’s why “the question” keeps coming up every time the river does, she said.“Farming is just a challenge all the way around anyhow, without the barges in the middle of the field,” Pecord said. “You just take it as it is and try to move on.”