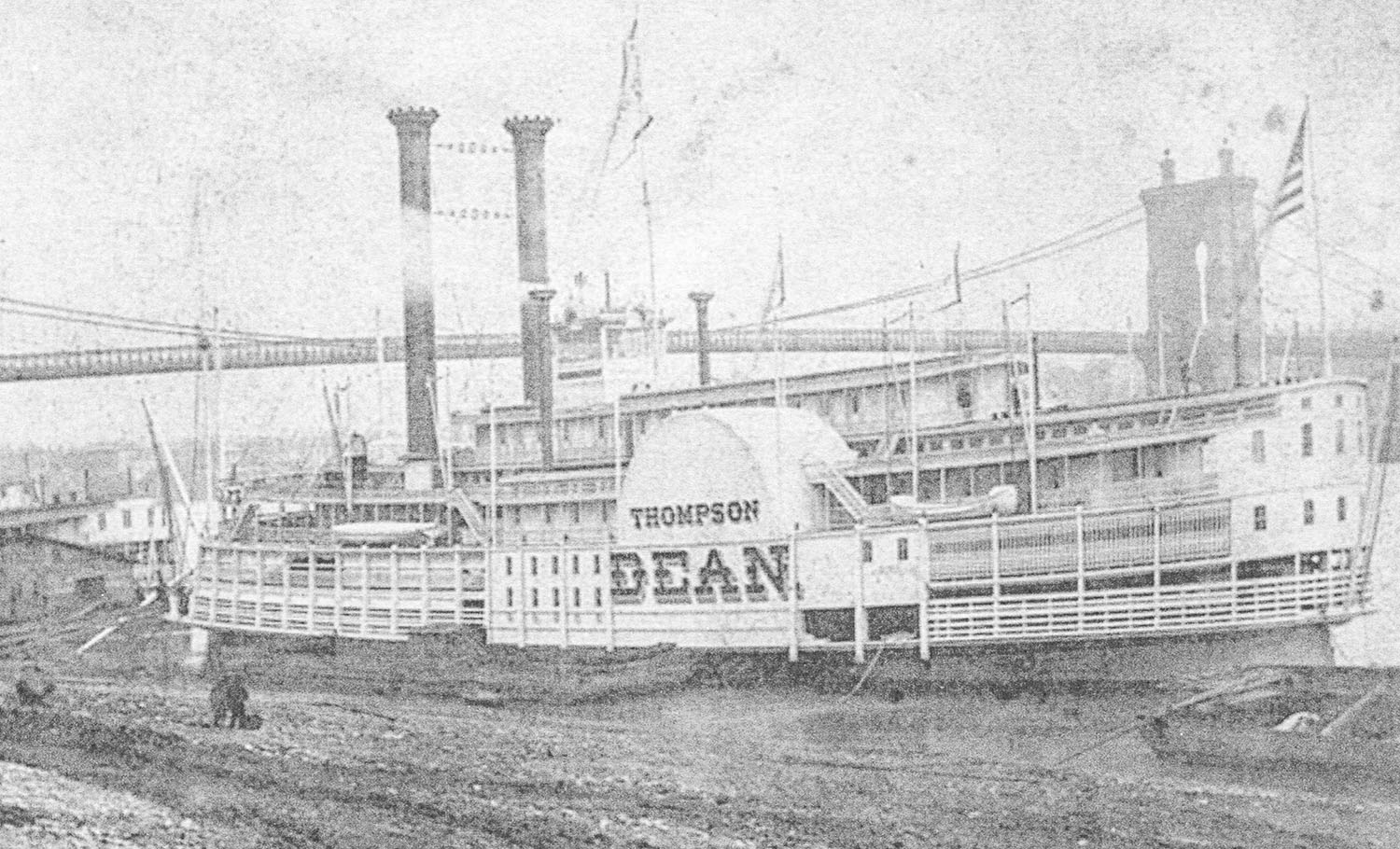 One of the large and palatial sidewheelers, the Thompson Dean was built at Cincinnati, Ohio, in 1872. Constructed on a wooden hull measuring 306 feet in length by 46 feet in width, the machinery was recycled from the first Thompson Dean, which burned at New Orleans in 1871. A battery of seven boilers supplied steam to engines having 30-inch cylinders with a 10-foot stroke. The ornate cabin of the boat was reported to be 246 feet in length, 18 feet wide and 17 feet in height.

Owned and operated by Thompson Dean and Capt. James Pepper, the riverboat ran in the Cincinnati-New Orleans-St. Louis trade. Upon Pepper’s retirement, Capt. William Miller assumed command; at that time the boat was operating between Memphis and New Orleans during the cotton season.

In 1876, the Dean made a fast trip from Cairo, Ill., to Memphis. The Memphis Commercial-Appeal reported on March 29, 1876, that, “The steamer Thompson Dean arrived here this evening. Time, port to port, 13 hours flat. The steamboat received 800 tons at Cairo, leaving there at 4:30 a.m. this morning. It came through the new cutoff at Devil’s Elbow, No. 37. The boat will add 1,800 bales of cotton here for New Orleans. Within 11 trips the Thompson Dean has made during the past fall and winter in the Memphis and New Orleans trade, it has carried into New Orleans 43,230 bales of cotton and 70,900 sacks of cottonseed, as well as numerous sundries. On its last trip the boat departed here with 4,400 bales of cotton.”

Miller left the Thompson Dean to devote his energies to building and operating the steamboat Guiding Star in 1878. Command of the Dean went to Capt. Dan Moore, who had just lost the Robert Mitchell to sinking. In 1882, the Thompson Dean was towed to Freedom, Pa., by the Tom Rees No. 2. The opulent cabin of the Dean was lifted over to a new hull, which became the sidewheeler Will S. Hays.

Fifty-eight years ago, when this writer first visited the Howard Steamboat Museum as a 9-year old in May 1963, Mrs. Loretta Howard told our third grade class tour that she had served as cook on the delivery trip of a New Orleans ferry boat. I don’t recall the name of the boat, but I’ve always wondered if it was the Louisiana, owing to the accompanying image from the museum collection.

Built in 1926 at Jeffersonville, Ind., the vessel was constructed on a steel catamaran hull that was 144.5 feet in length, 55 feet in width and having a depth of 9.3 feet.

Owned by the Baton Rouge Transportation Company, the boat operated at that city for 83 years. It was converted to diesel power in 1969 with propellers replacing the center paddlewheel. After the opening of the Wilkinson Bridge in 1968, the Louisiana moved to Plaquemines Parish.

At last report, the retired vessel was a maintenance barge at the Belle Chasse ferry crossing.

In the image herewith, Capt. James E. Howard (1875–1956), last proprietor of the Howard Shipyards & Dock Company, is standing at the right rear corner of the pilothouse, accompanied by his daughter, Martha. The only other person identified in the picture is William Gibbons, fourth from left, who served as chief engineer aboard the boat. Of all the questions I asked Loretta Howard when I became a volunteer guide at the museum, I often wish I could visit with her one more time!