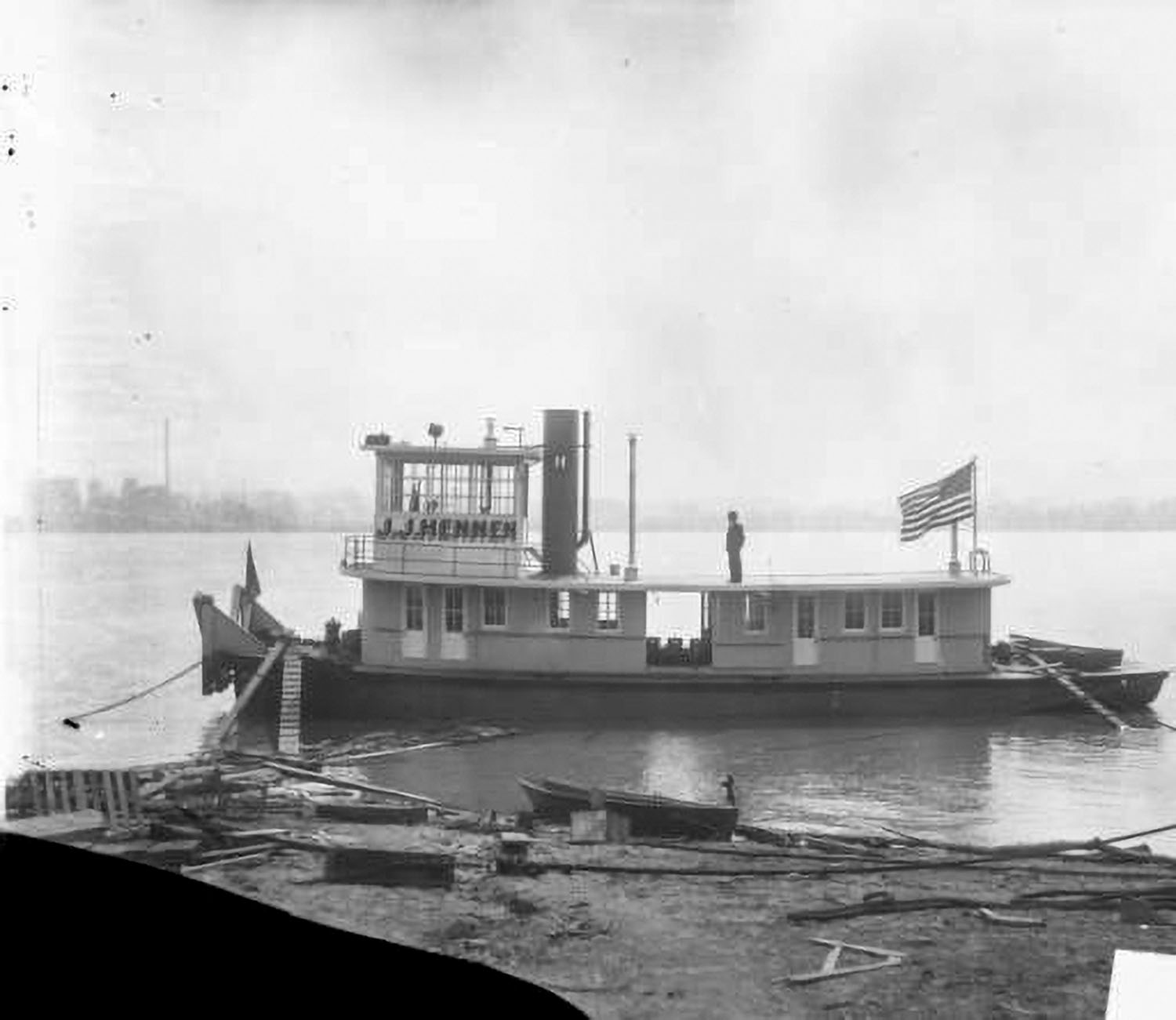 The Howard Shipyard & Dock Company, Jeffersonville, Ind., as well-described in The Waterways Journal Old Boat Column now authored by Keith Norrington, was one of the most celebrated boat-building concerns on the Western Rivers. The Howards built some of the finest steam packets that ever existed, and to a lesser degree built a number of steam-powered sternwheel towboats.

The Howards had also constructed several propeller-driven vessels, including the self-propelled barge INCO No. 1 in 1915. In 1920, they built the steam prop towboats Cordova and Demopolis for the Inland Waterways Corporation, followed by the Montgomery in 1923.

In 1927, the shipyard agreed to construct a single-prop, diesel towboat for Capt. J.J. Hennen. Some records refer to the “Hennen Brothers,” but the List of Merchant Vessels, as well as editions of the Inland River Record, only reference Capt. Hennen. At any rate, the firm already had a small single-screw towboat, the H.S. Hennen, which had been built at Grafton, Ill., in 1923. This boat was 60 by 15 feet and was rated at 100 hp.

The Howards completed the new boat for the Hennens in 1928. Named J.J. Hennen, it was 76 by 18 feet and had a hull depth of 6 feet. Power to the single propeller was supplied by a Standard diesel engine rated at 250 hp. Photos of it new at the Howard yard show it to be a trim little vessel with a finely modeled bow and a shapely stern. Atop the single main cabin was a large pilothouse with multipaned windows and traditional pilotwheel, as well as a single tall smokestack, all of which gave the vessel a steamboat appearance.

A book detailing the history of the Howard Shipyards, From Paddle Wheels to Propellers by Charles Preston Fishbaugh, contains excerpts from a press release to the local newspaper concerning the new boat:

“For work on the Western Rivers, particularly in pushing tows, the handling or flanking of a boat is very essential. The old-time stern wheelers with their multiple rudders can flank a tow neatly around a bend in the river, but some of the later screw-propelled boats have not been able to handle tows with equal facility. This boat is of the concave stern type and is a single-screw with two rudders forward and one aft of the wheel, which arrangement places all three rudders directly in the wheel current either backing or going ahead. This rudder arrangement for single-screw boats is a new design and is patented by Howard Ship Yards.”

The common argument from sternwheel towboat proponents of the time had always been that while the screw-wheel boats could steer coming ahead much better than a paddlewheel boat, they could not flank as the sternwheelers could. The prop boats usually only had rudders behind the propellers, and none forward. This new rudder arrangement corrected that fault and is still the primary arrangement in use on conventional towboats today.

Of interest to this writer is that the press release made mention of “old time stern wheelers.” At the time this was written, Howard was designing a new sternwheel steam towboat to build for stock.

The Hennens’ new boat went into service with great hope and promise; however, by 1931, it was back at Howard. According to Paddle Wheels to Propellers, with the deepening Great Depression the Hennens were unable to finish paying for the boat, and the Howards not only had the J.J. Hennen back, but also several thousand dollars in debts attributed to the boat’s operation.

It languished at the yard for well over a year afterward as a buyer was sought, and this all contributed to the financial difficulties the Depression had already placed the Howard yards in. The 1946 Inland River Record and subsequent issues say the boat was operated by Capt. Hennen until sold to Producers Pipeline Company, but does not show a date sold to Producers. The List of Merchant Vessels for 1932 show the boat as owned by James Howard, who was the head of the Howard yards, and the 1933 list shows it owned by Producers, who had named the boat, appropriately, Producers, the name it would then carry as long as it operated.

Producers Pipeline made changes to the vessel as the years went by. A photo of the boat on the Madison (Ind.) Marine Ways taken in 1938 shows that an upper cabin had been added. A note is made in the 1946 Inland River Record that the original engine was replaced at Evansville, Ind., in 1934 with another of 350 hp., but it does not give the make of the new engine. The boat was again repowered in 1948 with a 410 hp. Superior diesel. At some point, the pilothouse was replaced with a smaller one.

The Producers Pipeline Company became a part of Louisville Refining in 1951. In 1952, the boat was sold to a Producers Towing Company, Cincinnati. It is not known if this company was a part of the previous owners, or if it was a new and different entity.

In 1955, the Producers was sold to James R. Hines & Company, Bowling Green, Ky., and for the next 13 years the boat was a fixture in their service towing tank barges on the Ohio and Green rivers, sporting their trademark white “H” on the black stack. Few noticeable changes were made to the exterior of the Producers during these years. The pilothouse and upper cabin had been fixed with rolled edges on the eves, which gave the boat a very nice appearance. Barry Griffith, an expert on the Hines family and firms, relates that due to wood rotting in this area the rolled edges were removed, and a simple boxed eve was installed. Barry also mentions that Jimmy Hines, in particular, was never happy with this look.

The interior of the pilothouse was remodeled at some point in the early 1960s, and the original pilotwheel was removed and a console built across the front. Still in place was the engine control, an unusual apparatus that was utilized to start, stop and control the speed of the direct-reversing diesel engine.

Griffith spent time aboard the Producers as a young man, and today its pilotwheel graces a wall of his dining room in Bowling Green.

Another to spend time aboard it was Jeff Yates, well known to the readers of The Waterways Journal. Jeff grew up in Henderson, Ky., and Capt. Herman Joe Brown, master of the Producers, resided there as well. Through their acquaintance, Jeff made trips aboard the boat as a teenager and vividly recalls the experiences, down to detailed hand-drawn river maps.

Hines sold the Producers in 1968 to Eugene H. Bartley, Beaver, Pa., who in turn sold it to Charles N. Grimm, Pittsburgh, in 1969. It was again sold in 1974 to G&C Towing, Point Pleasant, W.Va. In 1975, the boat was sold on lease-purchase to Chaplin Towing Company of Sardis, Ohio.

Chaplin Towing was owned by Capt. Marlin Chaplin. Capt. Chaplin was a bona fide river character with an unmistakable voice that could be heard far and wide. He was also a highly skilled and competent towboat pilot. The 410 hp. Producers  ran in and out of the river with a single string of barges five long, just as the larger boats in the same trade did. When he was ready for time off, Chaplin tied the boat up at G&C landing, Henderson, W.Va., and it was there until he was ready to come back. Instead of the usual pilot’s chair in the pilothouse, Capt. Chaplin had a large recliner mounted on a box that he used for that purpose.

The only time that I was personally aboard the boat was during this  period. The boat that I was decking on was tied off beside the Producers, and I wandered around looking it over. One thing that stands out in my memory are the brass caps that were affixed to the tops of the bitts on the head and stern. The ones on the head were heavily cut up where axe blades had chopped wires and lines over the years, but the ones at the stern were near pristine and read: “Str. J.J. HENNEN, HOWARD SHIP YARD AND DRY DOCK CO.”

On the night of August 29, 1977, the Producers was backed in and tied off at Mile 17 Kanawha River when fire broke out. The wooden cabins were rapidly consumed, and the hull sank. It was later raised and scrapped, ending some 50 years of operation for a vessel that pioneered successful flanking rudders for diesel-powered propeller towboats.