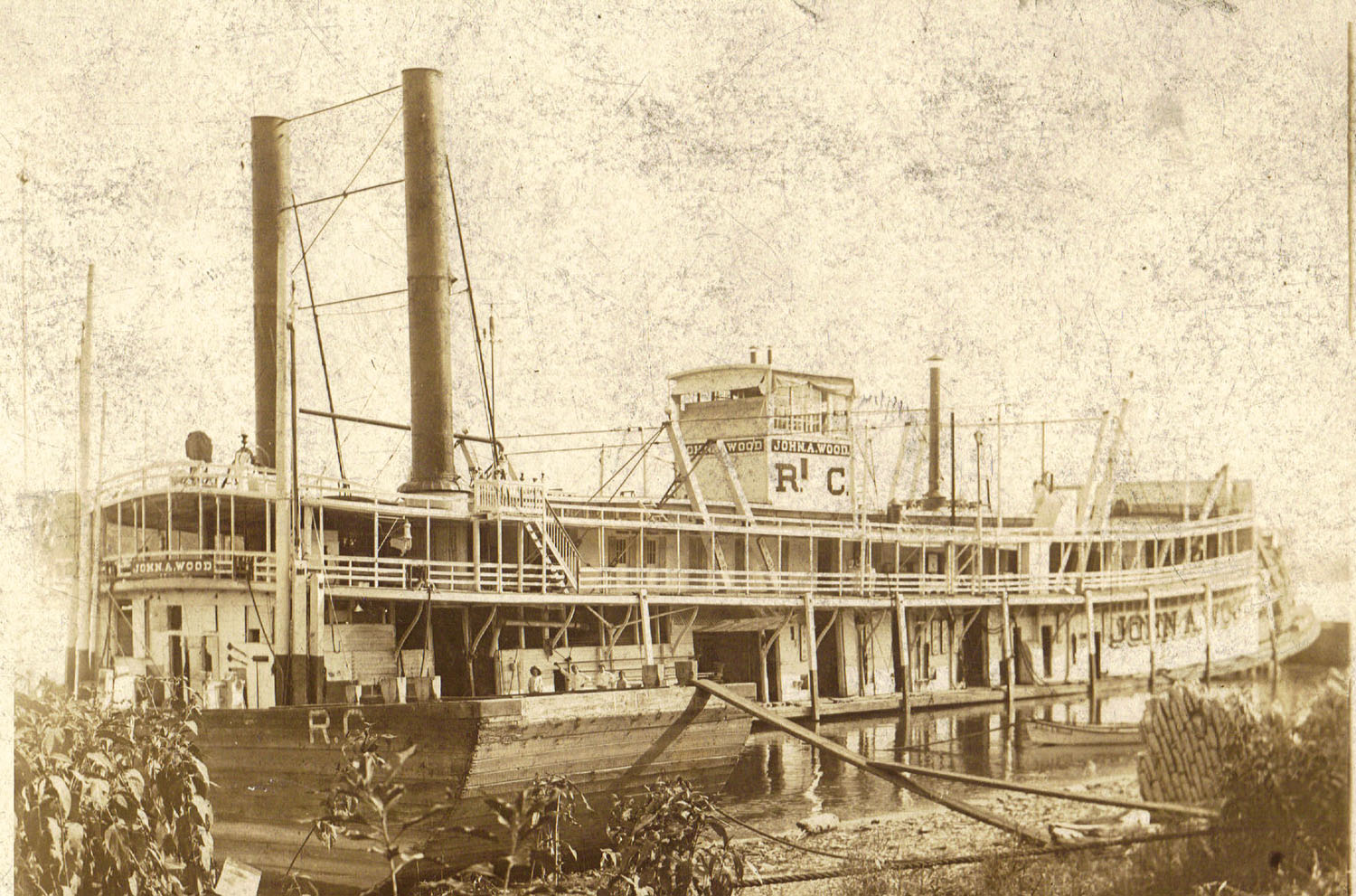 The John A. Wood

A well-known steam towboat that operated on the Ohio and Mississippi was the John A. Wood. The hull (198 feet in length by 40 feet in width) was built in 1870 at Freedom, Pa., by the McCaskey & Kerr yard, with completion at Pittsburgh. Steam for the condensing engines was supplied by six boilers, built in two batteries of three each. The machinery was by the Hartupee firm of Pittsburgh; the Wood was the first compound engine towboat on inland rivers.

The steamboat was owned by John A. Wood & Sons, coal operators of Pittsburgh. It was long under the command of Capt. Jonathan H. Wood, with Capt. Al Faulkner serving as pilot for some 25 years.

The Wood had the distinction of operating for 55 years and, as with all steamboats, had some harrowing adventures. In December 1870, on its second downbound trip with a coal tow, the big sternwheeler broke its hogchains while working in heavy ice at California, Ohio.

In the spring of 1879, the boat was taken below New Orleans to retrieve eight empty barges from the Jetties. The trip became a festive occasion with many members of the Wood family in attendance; one of the special guests aboard was Capt. James Buchanan Eads, builder of the great bridge at St. Louis. On the return journey, the riverboat cracked its paddlewheel shaft, and the distinguished passengers had to be transferred to a tug and taken back to New Orleans. The disabled riverboat, with one barge in tow, slowly proceeded upriver. Heavy fog was encountered and the pilot, Capt. Lew Moon, attempted to steer between the Desota (a sunken ship) and the shore. The Wood struck the wreck, and the towboat sank in 18 feet of water. The raising operation, under the direction of diver Al Burris, was extensive and involved pumping operations from no fewer than four tugs.The largest coal tow up until 1880 was handled by the Wood; it took 21 coalboats and eight barges to New Orleans. The crew was composed of Capt. Jonathan Wood, master; Capt. Dan Teal, Capt. R.B. Pepperday and Capt. G.W. McBride, pilots; Herbert Underwood and William Carter, engineers; Thomas Murray and James O’Neill, mates.

The towboat became part of the Combine firm in 1900, towing mainly south of Louisville. Ky. The towboat was taken to Pittsburgh in 1915 and retired.

In July 1918, the Wood was purchased by W. Harry Brown amidst much speculation of a rebirth of southern coal towing. Nothing came of the venture, and the boat was turned over to the Pittsburgh Steel Company in early 1919, along with Brown’s other holdings.

In the autumn of that same year, Capt. E.F. Weick of the Standard Oil Company of Louisiana came to Pittsburgh to purchase the steamboat. The Wood was hauled out on the marine ways at Elizabeth, Pa., and completely rebuilt under the supervision of Capt. George Reed. The steamboat departed Pittsburgh for Baton Rouge on June 21, 1920. On the Lower Mississippi, Capt. Canton P. Seitz (later an officer on the Sprague) served as master with Hugh Edwards presiding as chief engineer.

The John A. Wood burned to the waterline at Baton Rouge in November 1925.

Caption for photo: The famous towboat John A. Wood at a landing. (Keith Norrington collection)