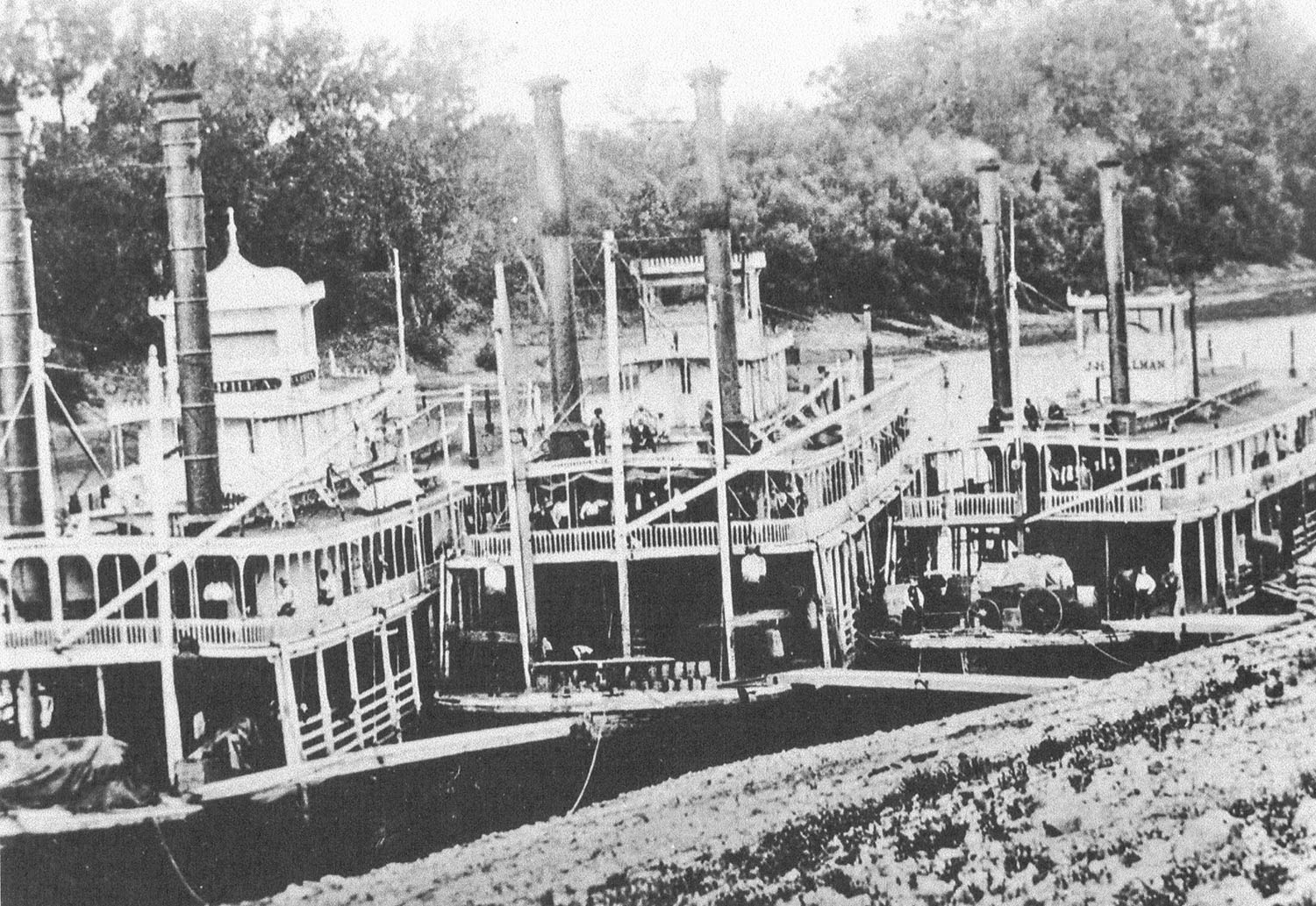 The Clarksville, Tenn., Landing Long Ago

This week’s Old Boat Column presents an image with a common factor. Taken in the 1880s, all three steamboats lying at the Clarksville, Tenn., wharf had the proud distinction of being constructed by the Howard Shipyard at Jeffersonville, Ind.

The packet with the domed pilothouse at the far left is the sternwheeler B.S. Rhea, built in 1886 at a contract cost of $6,650 for the Ryman Line to run in the Nashville-Paducah trade, connecting with the C.W. Anderson on the upper Cumberland River. Named for the “Corn King of Tennessee,” the Rhea had a wooden hull measuring 165 feet in length by 27.1 feet in width. The engines had 14-inch cylinders with a 4.5-foot stroke. An earlier vessel of the same name was built in 1878 at Louisville and burned in 1885.

The second Rhea was under the command of Capt. J.S. Tyner, master of the Ryman Line. On June 10, 1890, while the riverboat was underway on the Cumberland, some 25 miles above Clarksville, the engineer discovered that the paddlewheel shaft was broken; his prompt action averted serious damage.

In 1894, Capt. John Barrett, of Cincinnati, purchased the Rhea. Barrett (father of Capt. Oscar Barrett) had the smokestacks painted red and operated the boat in competition with the U.S. Mail Line between Louisville and Cincinnati. From the Pittsburgh and Cincinnati Packet Line he also bought the Scotia to run in conjunction with the Rhea.

On March 3, 1895, the main steam line in the engineroom of the Rhea broke while the boat was landed at Madison, Ind.; three men were injured. Less than a month later, while the steamboat was underway near Madison, the line again broke, scalding a man. The entire steam line was quickly replaced with a new one. According to steamboat inspectors’ records, the Rhea, Scotia and Barrett Line towboat Sidney Dillon were laid up for low water at the lower end of Cincinnati in the late autumn of 1895. A fire that originated aboard the Dillon quickly destroyed all three vessels.

The boat in the center is the J.P Drouillard, built in 1881 at a cost of $7,000. Named for an iron industrialist at Nashville and operated by the Ryman Line, the sternwheeler’s wooden hull measured 165 feet long by 31.3 feet wide. The equipment was recycled from the packet Bolivar H. Cooke, built by Howard in 1873 and dismantled in 1880.

Under the command of Capt. W.R. Gracey, the boat operated in the Nashville-Paducah trade. The only recorded accident was the loss of a deckhand who fell overboard on February 5, 1895. Reportedly, the boat received its last inspection on December 22, 1891, at Paducah.

Moored at far right is the sternwheeler J.H. Hillman, built for $9,925  in 1882. Constructed on a wooden hull measuring 149 feet in length by 28.5 feet in width, the steamboat was named for a Cumberland River iron operator who later moved to Pittsburgh and became a leading industrialist.

The Hillman was sold, remodeled into the J.J. Odil and destroyed at St. Louis in the cyclone of 1896.

My heartfelt appreciation for the many expressions of sympathy in the recent passing of my father, Ken Norrington. The kindness of the river community is greatly appreciated.

Caption for photo: A trio of packet boats at Clarksville, Tenn., in the 1880s. (Keith Norrington collection)