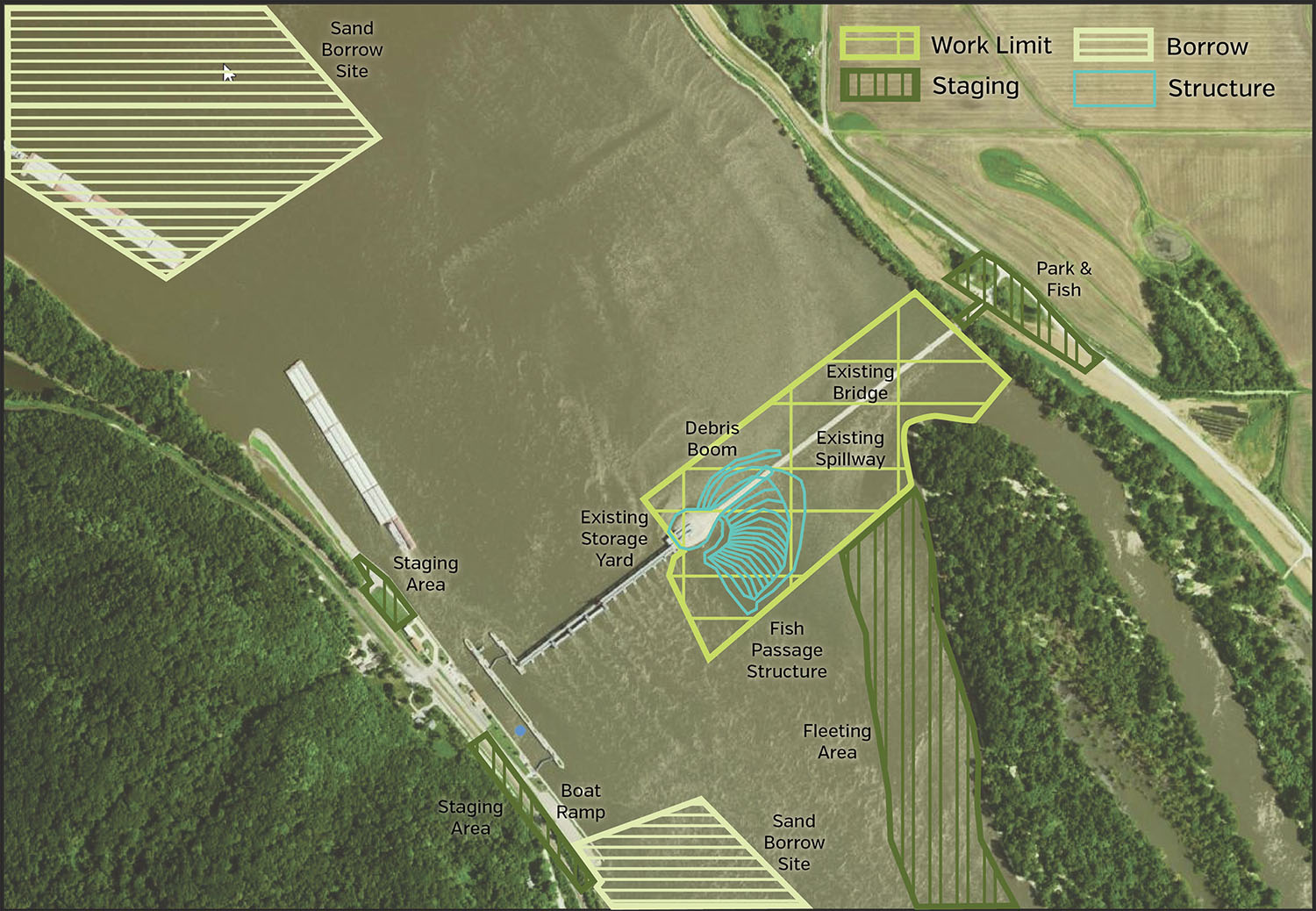 The project, which is authorized as part of the Navigation and Ecosystem Sustainability Program (NESP), would restore a migration pathway for fish by constructing a “fishway” across the spillway at Lock and Dam 22. If completed, the project would be the first of its kind on the Upper Mississippi River and would increase access to upstream habitats and help improve the size and distribution of native migratory fish populations.

“The need for fish passage on the Upper Mississippi River has been known by fisheries biologists for over a century,” said Mark Cornish, environmental planning section chief for the U.S. Army Corps of Engineers, Regional Planning and Environmental Division, North. “Only recently have methods been identified that can work with the kinds of fish in the Mississippi River.”

Through a collaborative process, started by the interagency work group known as the Navigation Environmental Coordinating Committee, Lock and Dam 22 was selected as an ideal site to study how to build and operate the first fishway on the Mississippi River.

The two main goals of the project are to restore a connection for fish migration on the Upper Mississippi River and to learn from the project so that knowledge can be applied to other fish passage projects. According to Cornish, more than 30 species of Mississippi River fish need to move between habitats throughout their lives for a variety of reasons including reproduction, feeding and winter survival.

“Dams have changed the way migratory fish travel up and down the river and we have an unprecedented opportunity to learn more about these amazing fish while restoring a year-round connection,” said Cornish. “Through the use of adaptive management and monitoring techniques, we will gather critical information and learn how to improve the effectiveness and efficiency of future fish passage projects. We will also learn more about how and when invasive species, such as the silver and bighead carp, move in our river system which ultimately will lead to better management strategies.”

Over the course of the last year, a team of environmental specialists, biologists and engineers evaluated various project alternatives to identify how each would perform. This resulted in the development of a tentatively selected plan that includes four main features.

First, a rock ramp, known as a fishway, would have a rock bottom and series of aligned boulders with gaps and spaces suitable for water and fish to move between.

The second would be a sea bridge that would extend from the storage yard over the fishway and connect to the spillway to enable people and vehicles to move over and around the fishway. Water-control structures, known as stoplogs, are the third feature and would be integrated into the bridge to control the flow of water into the fishway for research and allow for maintenance. The final feature is a debris boom that would be installed immediately upstream of the fishway and would protect it from large woody debris and ice. The feature would also serve as a safe platform for monitoring and fish management activities.

As with any federal project, a few key steps are needed before construction can begin.  “We are currently nearing the end of what is known as the feasibility phase,” said project manager Rachel Hawes. Following the recent closure of the comment period, “we will make any necessary adjustments to the plan and send it on for higher level approval.”

If approved at both the Corps’ Mississippi Valley Division, and headquarters levels, pre-construction engineering and design of the project can proceed. A contract for construction could then be awarded once funding is received.

The Lock and Dam 22 Fish Passage Improvement Project is just one of more than 200 potential NESP projects designed to restore, protect and enhance the environment through ecosystem restoration. NESP will also improve the system capacity and reduce commercial traffic delays on the Upper Mississippi River System through navigation efficiency improvements.