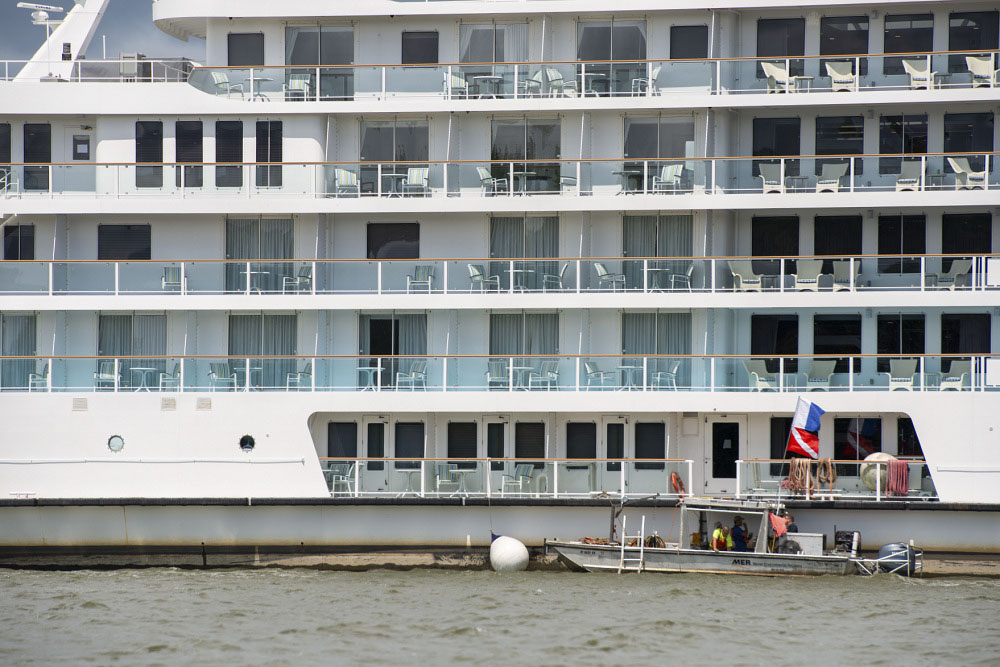 Note: this is an updated version of a story that was originally posted July 12.

Fuel is being removed from American Cruise Lines’ American Jazz before authorities try again to pull it off a sandbar in Lake Barkley, an impoundment of the Cumberland River in western Kentucky.

Coast Guard Lt. Phillip Baxter of Marine Safety Unit Paducah said lightering operations to lessen the weight of the boat were taking place July 15, mainly through the removal of fuel.

Cables were expected to be attached to the vessel July 16, with another attempt to dislodge it scheduled for July 17, Baxter said.

Of its 49 crew members, 27 remained on board, he said. The Coast Guard set minimum manning requirements for the vessel at nine crew members.

The inland river cruise boat, which began cruising March 21, ran aground outside the channel July 7 at Cumberland River Mile 62, near the bridge carrying U.S. 68 over the lake in the Canton community. No one was injured. A safety zone is in place from miles 61.5 to 63.5.

Passengers had been on a seven-day cruise between Memphis and Nashville, Tenn., along the Mississippi, Ohio, Tennessee and Cumberland rivers.

“In order to ensure the safety of both responders and the public, boaters are not permitted to transit within 100 yards of the vessel and salvage operations area during salvage operations,” said Cmdr. Jennifer Andrew, federal on-scene coordinator as well as commanding officer of Marine Safety Unit Paducah. “Mariners are encouraged to monitor VHF-FM radio channel 16 for updated information.”

Mariners with questions about the safety zone, or to request transit through the zone, should contact the Coast Guard via VHF marine radio Channel 74 or by phone at 270-331-8290.

A unified command is overseeing diving operations to assess the riverbed for future salvage operations to determine how to safely refloat the riverboat. The command is composed of representatives from the Coast Guard, the commonwealth of Kentucky, Trigg County and American Cruise Lines.

Previously, two towboats were unable to dislodge it from the sandbar.

As part of the salvage plan, American Cruise Lines activated a salvage and marine firefighting agreement with Donjon-SMIT.

There continues to be no damage to the vessel, no pollution and no environmental concerns, Paolella said.

The Coast Guard is investigating how the vessel came to be out of the channel and grounded.

The boat’s 120 passengers were removed from the American Jazz using pontoon boats, with rescue and assist boats nearby, on July 9 before being bused to Nashville, where their trip was scheduled to conclude on July 11. They spent two nights at the Drury Plaza Hotel Nashville, near the Country Music Hall of Fame and Museum. They were given a special dinner at the Nashville Nightlife Dinner Theatre and a backstage tour of the Ryman Auditorium, along with attending a performance of the Grand Ole Opry. American Cruise Lines did not indicate whether passengers would be offered refunds, future cruise credits or any other kind of compensation.

Paolella said crew members remaining on board are fully equipped with supplies, safe and comfortable and that additional fresh water had been delivered. All onboard systems remain operational, she said.

“American Jazz continues to rest on the soft, muddy bottom of the sandbar,” Paolella said. “The modern riverboat is specifically designed to make bow landings and regularly makes bow landings along river banks in shallow water. We are very sorry for any inconvenience this incident caused to our guests and the surrounding community. American remains fully committed to working together until our riverboat can be freed from the sandbar, and we anticipate that when it does, it will be able to sail under its own power and resume all normal operations.”

Caption for photo (click on photo for uncropped version): The Lake Barkley Unified Command approved dive operations to assess underwater conditions where the American Jazz is grounded in Lake Barkley, an impoundment of the Cumberland River. The boat ran aground outside the channel at Mile 62 on July 7. Passengers were deboarded using pontoon boats. Some crew members remain aboard. (photo by Petty Officer 3rd Class Gabriel Wisdom/U.S. Coast Guard)