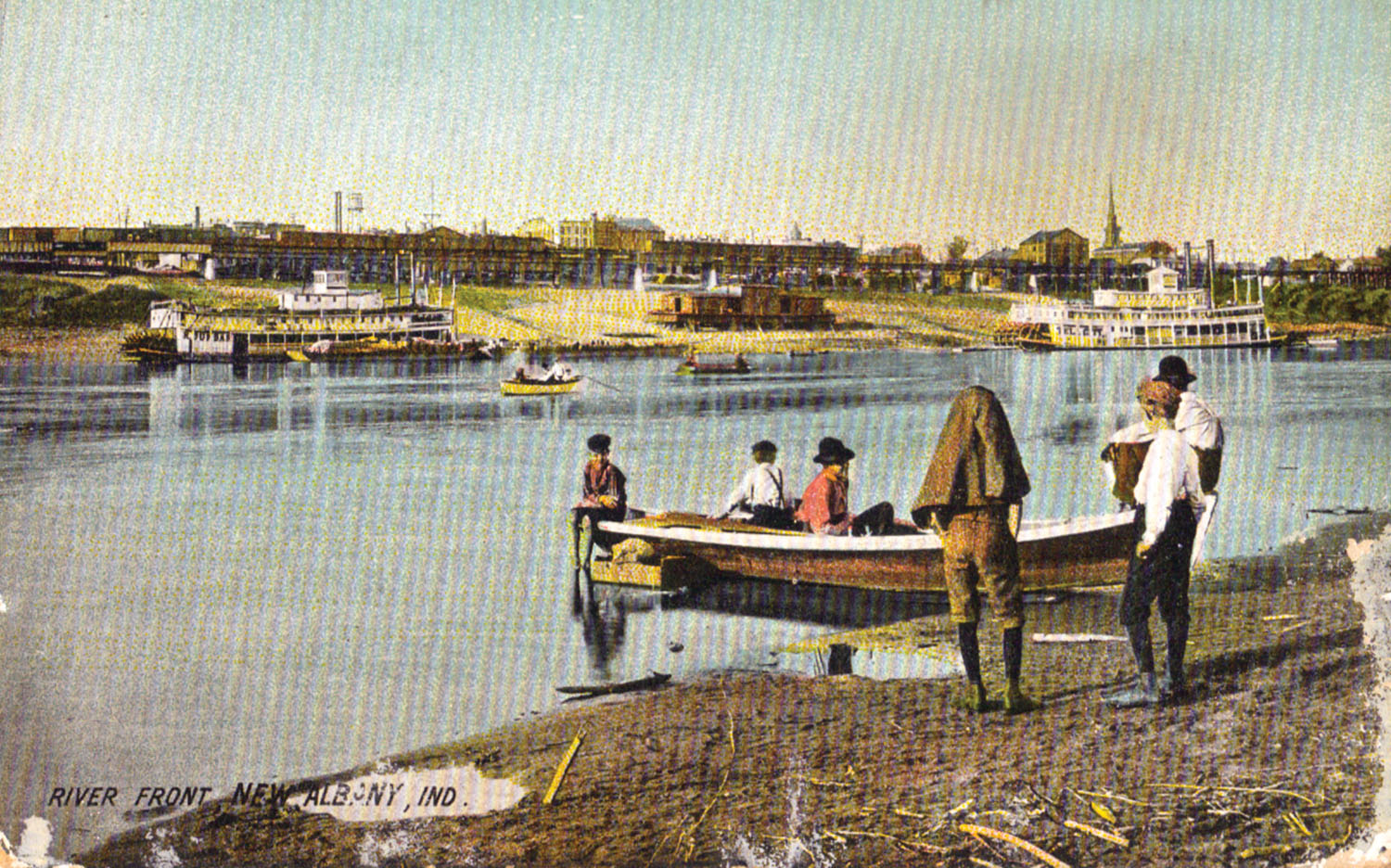 The New Albany Wharf By Day And Night

The Old Boat Column this week presents two versions of a vintage view of the riverfront at New Albany, Ind., the writer’s historic hometown. Published as night and day post cards, the original image was taken during low water from the Kentucky shore on Sunday, September 20, 1908; the skiff in the foreground was likely used to ferry the photographer across the river. The steamboats Tell City (right) and the R. Dunbar are moored at the levee with the city wharfboat, long managed by Moses Irwin, pulled out on the cobblestone esplanade for repairs. At the far right of the photo is the spire of what has long been known as the Town Clock Church. Built in 1849 as the Second Presbyterian Church, the edifice, which is extant, contained a fine Hook & Hastings pipe organ and was a noted landmark for river pilots, as well as being a station on the Underground Railroad. Since the 1890s, the stately structure has been owned by the Second Baptist Church and, despite having a small and dwindling congregation, regularly holds weekly services in the building.

The R. Dunbar was built in 1895 for a contract price of $7,000 by the Howard Shipyard at Jeffersonville, Ind. The sternwheeler had a wooden hull that was 160 feet in length by 29.4 feet in width. The light-draft vessel was constructed for the Ryman Line to operate in trades above Nashville on the Cumberland River. The steamboat was named for Reuben Dunbar, a storekeeper at Greasy Creek, Ky., and carried some notable passengers, including the Honorable Cordell Hull, who served as secretary of state (1933–1944) and who made frequent trips on the riverboat.

The Dunbar was sold to John W. Hubbard in 1914 and ran in the Pittsburgh-Charleston trade. Sold to Liberty Transit Company in 1918, the boat was renamed General Crowder.

Also a product of the Howard Shipyard, the Tell City was constructed at a cost of $21,350 in 1889 on a wooden hull measuring 191 feet in length by 35 feet in width. Owned by the Louisville & Evansville Mail Line Company, the boat originally had twin stages until 1898, when it changed to a single stage. In 1902, ownership changed to the Louisville & Evansville Packet Company, and the boat ran in conjunction with the Tarascon.

Prominent New Albany funeral director Paul W. Seabrook (1897–1989) often talked to this writer about serving as mud clerk and steersman on the Tell City in his youth. The riverboat was rebuilt and widened in 1911 at Point Pleasant, W.Va.

On April 6, 1917, the Tell City had landed at Little Hocking, Ohio. Upon departure, Capt. Mike Davis backed the boat down through the open beartrap of Lock No. 19. Striking the structure, the boat began rapidly taking water and was forced into shore with enough headway that the smokestacks were knocked down. The steamboat settled quickly and was a total loss. The pilothouse was salvaged by the Bent family and became a summerhouse for many years at Little Hocking.

The Ohio Historical Society obtained the relic and, after a 1977 restoration project (funded by the Sons & Daughters of Pioneer Rivermen), the pilothouse today is displayed on the premises of the Ohio River Museum at Marietta, Ohio.