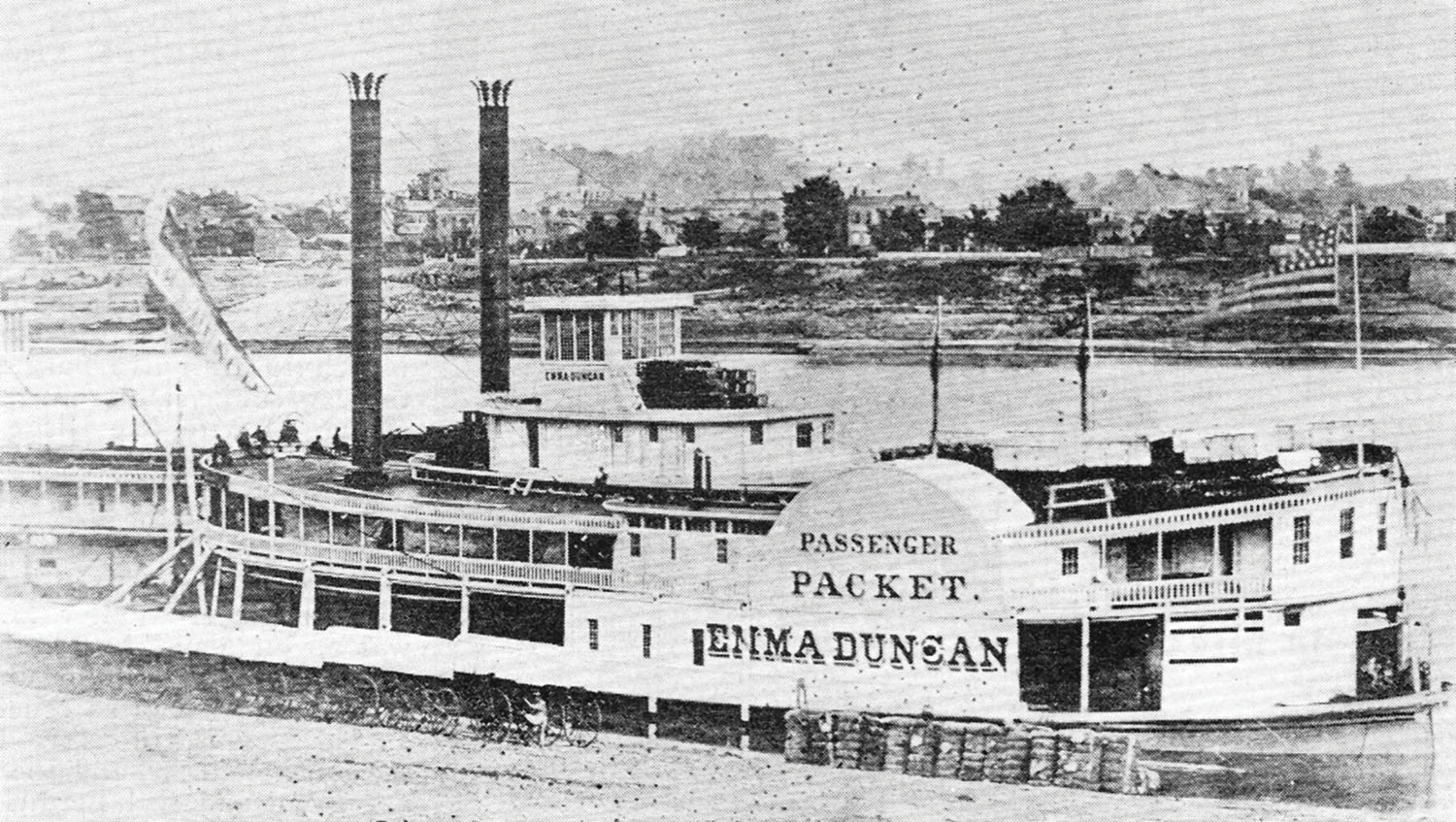 Named for the daughter of a Cincinnati furniture manufacturer, the sidewheel packet Emma Duncan was built in 1860 at Pittsburgh.

Constructed on a wood hull measuring 180 feet in length by 34 feet in width,  the vessel  cost $27,000. Three boilers supplied steam to engines having 24-inch cylinders with a 6-foot stroke. The sidewheels were 28 feet in diameter with bucket planks 8 feet in length.

The riverboat was owned by Capt. F.Y. Batchelor, who initially operated it in the Cincinnati–St. Louis trade, later changing to the Cincinnati–Pittsburgh run.

Records state that the Emma Duncan transported supplies for the U.S. Army during the Civil War, under the command of Capt. Stanton Batchelor. This week’s Old Boat Column image, taken at Cincinnati, clearly shows Army wagons lined up on the landing. The vessel was reportedly under charter to the government in the fall of 1862, when it was ordered to go to Louisville and referred to in official correspondence as a gunboat.

On March 24, 1863, Rear Adm. David D. Porter of the U.S. Navy purchased the steamboat at Cairo, Ill., for $39,000. The name was changed to the U.S.S. Hastings, and it was outfitted with ordinance consisting of two 30-pounders, Parrott rifles, two 32-pounders, four 24-pounders and one heavy 12-pounder. The number 15 was painted in 2-foot-high numerals on the pilothouse.

The Hastings was first used in convoy duty on the Tennessee and Cumberland rivers. The steamer’s first military encounter occurred on April 24, 1863, when the boat was attacked by a field battery at Green Bottom Bar on the Tennessee River; three crew members each lost an arm.

On October 31, 1863, while landed at Eastport, Tenn., headquarters for Major Gen. William Tecumseh Sherman (then commanding the Army of the Tennessee), the steamboat’s facilities were utilized by the general, who dispatched orders from on board. The Hastings subsequently saw patrol duty on the Lower Mississippi and ascended the White River as far as Des Arc; the boat also participated in the Red River campaign.

A noteworthy performance of the Hastings was the seizure of the Clyde (a propeller—driven boat) at Buck Island, below Memphis. The Clyde was brought to Memphis and presented to the Army as a war prize. During 1864, the most outstanding service performed by the Hastings was in the defense of Fort Pillow.

The final contribution to the war effort was on February 28, 1865, when the boat’s arrival at Hickman, Ky., dispersed a guerilla raid.

On June 7, 1865, the Hastings was decommissioned and on August 17, sold at public auction, at Mound City, Ill., to Henry Semmes for $12,700. The boat was redocumented that autumn with the name being changed to Dora. The vessel was re-enrolled at New Orleans in the spring of 1868 by Capt. Kennedy Lodwick, who was the sole owner. With several more changes in ownership, the Dora ran in the New Orleans and Red River trades for a brief time.

According to official reports, the boat was condemned by the Steamboat Inspection Service in 1871. The Lytle List states that the faithful sidewheeler was abandoned and removed from the lists in 1872.

A New Orleans harbor salute for Capt. Clarke “Doc” Hawley on his 86th birthday this week on August 1. Retired master of the excursion steamer Natchez, Hawley has served aboard the Avalon/Belle of Louisville, Delta Queen and several towboats. He is regarded as America’s iconic steamboat captain.

Caption for top photo: The Emma Duncan at the wharf. (Keith Norrington collection)

For questions or suggestions regarding the Old Boat Column, Keith Norrington may be contacted by e-mail at curatorkeith@yahoo.com.