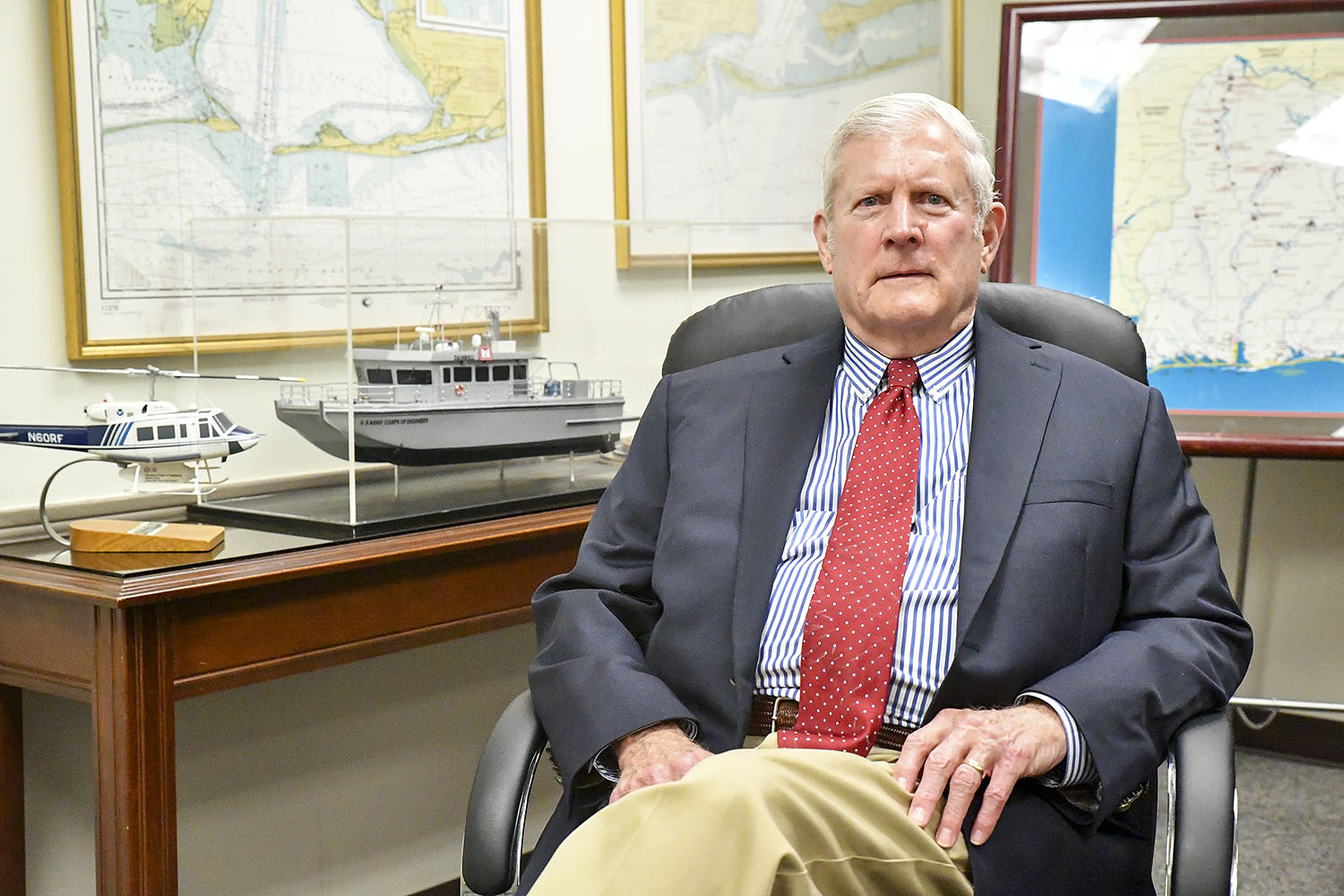 After 14 years at the helm of the Warrior-Tombigbee Waterway Association (WTWA), Larry Merrihew has retired as president of the organization, effective August 1. And yet association members and waterway stakeholders already have a new—and very familiar—president in place to lead the economic development and advocacy efforts for the waterway. Wynne Fuller, the longtime operations division chief for the Mobile Engineer District, who retired from that role in early June, assumed the role of WTWA president the same day Merrihew stepped down.

Asked how the plan to pass the sticks to Fuller came about, Merrihew laughed and said, “Well, I invited him for a cup of coffee.”

The irony is that’s how Sheldon Morgan, Merrihew’s predecessor, first asked him to consider applying for the job to lead the association when Merrihew had just retired from Regions Bank after 42 years.

In his 14 years as president of the association, Merrihew has been there through hurricanes and high water, commodity shifts and economic downturns, new industry, significant investment in the state of Alabama’s seaport and the pandemic.

Reflecting back on that time, Merrihew pointed to a wide range of investments along the waterway, like the construction of a bridge that helped pave the way for a large steel mill to come to Alabama, lower miter gate replacements at some of the waterway’s locks and the development of private and public ports and terminals along the waterway, which stretches from near Birmingham to the Mobile area. Merrihew said, as WTWA president, he has also been a partner with companies applying for permit renewals and with the Alabama State Port Authority as it has grown the Port of Mobile and sought to deepen its ship channel below 50 feet.

Through all that, Merrihew said, he’s benefitted from unwavering support from those who serve and do business on the Warrior-Tombigbee Waterway, the Tennessee-Tombigbee Waterway and neighboring ports and waterways.

“Sheldon, Don Waldon [former head of the Tennessee-Tombigbee Waterway Development Authority], Wynne Fuller when he was at the Corps and Charlie Haun [vice chairman and CEO of Parker Towing Company] are those that have really counseled me and kept me working for the waterway in the right way,” Merrihew said.

Merrihew said he is excited for the waterway with Fuller as president of the association.

“We believe he can be that person to help us take this thing to another level that would enhance the waterway for the users and the state of Alabama,” Merrihew said.

Fuller brings to the job a wealth of experience garnered from a total of 46 years of federal service. He was commissioned as a lieutenant in the Army Corps of Engineers in 1970 and retired as a colonel from a very active career in the Army Reserve in 2000. During that time, Fuller held command and staff roles in engineering, aviation, logistics and transportation while serving in the United States, Asia, Europe, Africa and the Middle East. He began his civilian service with the Corps in 1979, and during his long career with the Corps, Fuller received awards including the emergency manager of the year in 1989 and the civilian of the year in 1991. During that time, Fuller served in the U.S. Virgin Islands following Hurricane Hugo in 1989, during Operation Just Cause in Panama and in the Middle East during Operation Desert Storm.

Fuller said he is energized by the chance to continue working for the Warrior-Tombigbee, even though he has traded a role with the Corps for a role representing industry on the waterway.

“It’s a partnership, and I’ve just moved from one side of that partnership to the other,” Fuller said. “I certainly want to see that continue. The knowledge I’ve gained technically, I believe, will be a great advantage. And one of the reasons I was interested in coming here was the opportunity to look at new challenges in different ways and learn new things, particularly how business is conducted from this side of the table.”

Merrihew plans to stay on with the association through the end of September in a consultant role. Together, the waterway veterans hope to put together a trip along the waterway to visit as many stakeholders as they can. They also hope to arrange a trip to Washington, D.C., to meet with elected officials and their staffs.

Whether on the waterway or in Washington, Fuller will be representing an association of more than 100 members—utility providers, oil and gas companies, operators, manufacturers, municipalities, ports and attorneys—who all do business on the Warrior-Tombigbee Waterway.

Merrihew said it’s a strategic waterway, which connects to industry throughout Alabama and, together with the Tennessee-Tombigbee Waterway, offers an alternative to the Mississippi River, all the while generating more than a tenfold return on investment for the nation. And still it has much room to grow.

“Our river system, all the way from Birmingham to Mobile, runs through about 15 of the most economically depressed counties in the state,” Merrihew said. “That’s another reason why we want to spend more and more effort enhancing the economic activity.”