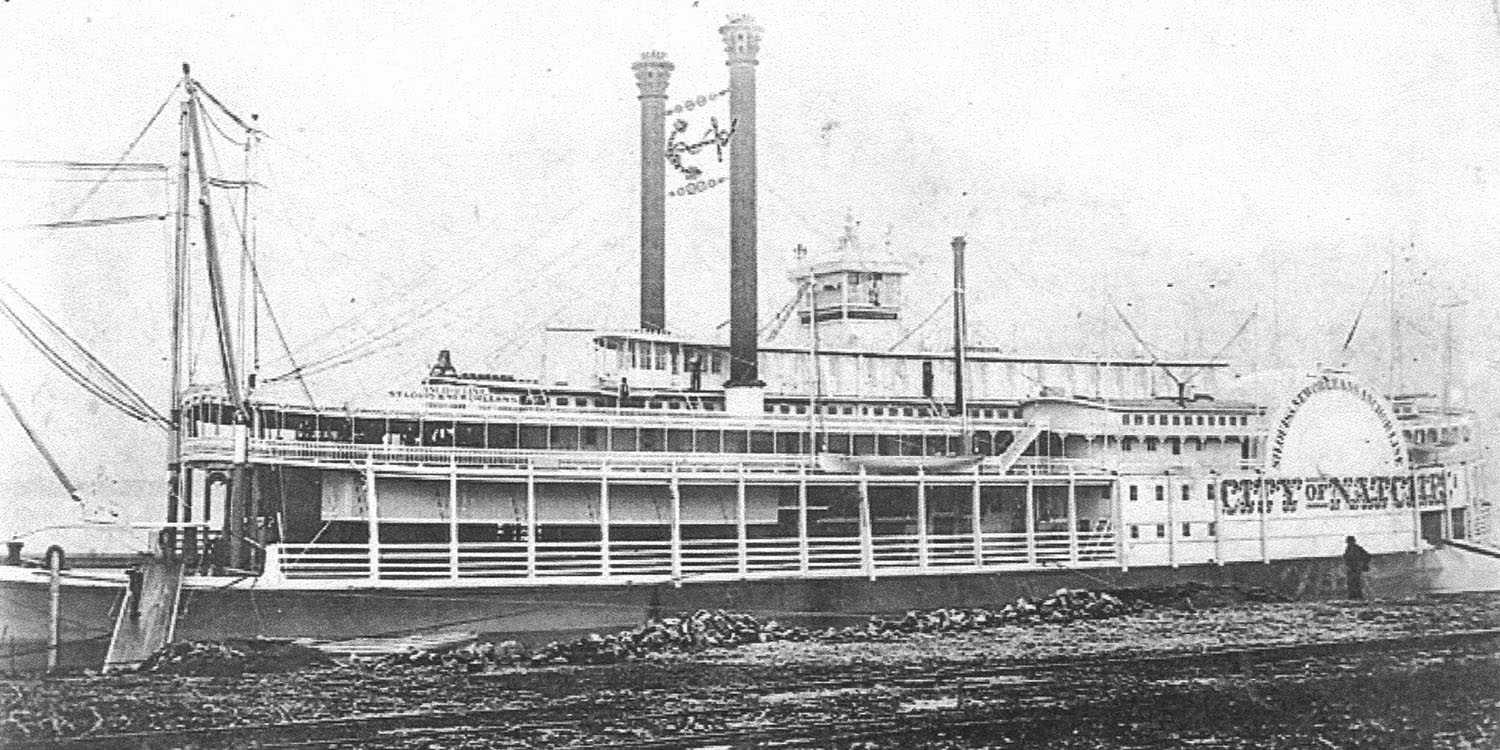 The Steamer City Of Natchez

The Old Boat Column this week presents a steamboat named for a renowned river city. Known internationally as a quaint Southern town with a rich culture, the little river town of Natchez, Miss., depends largely upon tourism for its survival.

The first inhabitants of the region were the Natchez Indians, from whom the city derives its name. In 1716, French, English and Spanish settlers came to the bluff overlooking the Mississippi River and began constructing homes, churches and other buildings in the styles of their native lands, creating various architectural influences that are extant today.

The Str. City of Natchez was a product of the Howard Shipyard at Jeffersonville, Ind. Built in 1885 for a contract cost of $75,000, the sidewheeler’s wooden hull was 300 feet long and 48 feet wide (83 feet overall including the cotton guards). Five boilers supplied steam to engines having 26-inch cylinders with a 10-foot stroke. The paddlewheels were 34 feet in diameter with 15-foot bucket planks.

The steamboat was owned by the famous St. Louis & New Orleans Anchor Line. Capt. Horace E. Bixby was master of the riverboat. Bixby was well-known on the river due to his association with Samuel Clemens (Mark Twain), for whom he had been mentor when Clemens was a cub pilot.Bixby was born in 1826 at Genesco, N.Y., and ran away from home as a youngster to Cincinnati, where he secured employment in a tailor’s shop.

By age 18 he was clerk on the Cincinnati-Kanawha River packet Olivia, and he ultimately became pilot of the vessel. The young man then went to work in the Cincinnati-New Orleans trade and later expanded to the St. Louis-New Orleans run, with additional license on the Missouri.

During the Civil War years, Bixby commanded the gunboat Benton. He visited with Mark Twain twice after his student became a celebrated author.

After he left the Anchor Line, Bixby’s last piloting was aboard the U.S. snagboat Horatio G. Wright. The revered riverman, who was described as being wiry and tremendously energetic, retired in 1912 at age 85 and passed away two days later in St. Louis.

In the autumn of 1976 this writer, escorted by river historian Ruth Ferris, visited the grave of Capt. Bixby and other river luminaries, including James Buchanan Eads, interred in St. Louis’ Bellefontaine Cemetery.

Aside from the City of Natchez, there have been nine steamboats to bear the Natchez name, most of them connected with the colorful Capt. Thomas P. Leathers. It was Natchez No. 6 that was the loser of the 1870 race with the Robt. E. Lee from New Orleans to St. Louis. Today, the New Orleans excursion steamboat Natchez (No. 9) built in 1975, proudly carries on the name.

The City of Natchez, known as the brag boat of the Anchor Line, was destroyed by fire 135 years ago. While moored at Cairo, Ill., on December 28, 1886, the towboat R.S. Hayes (which was tied up alongside) caught fire with the flames rapidly spreading to the City of Natchez, consuming the palatial one-year-old steamboat.