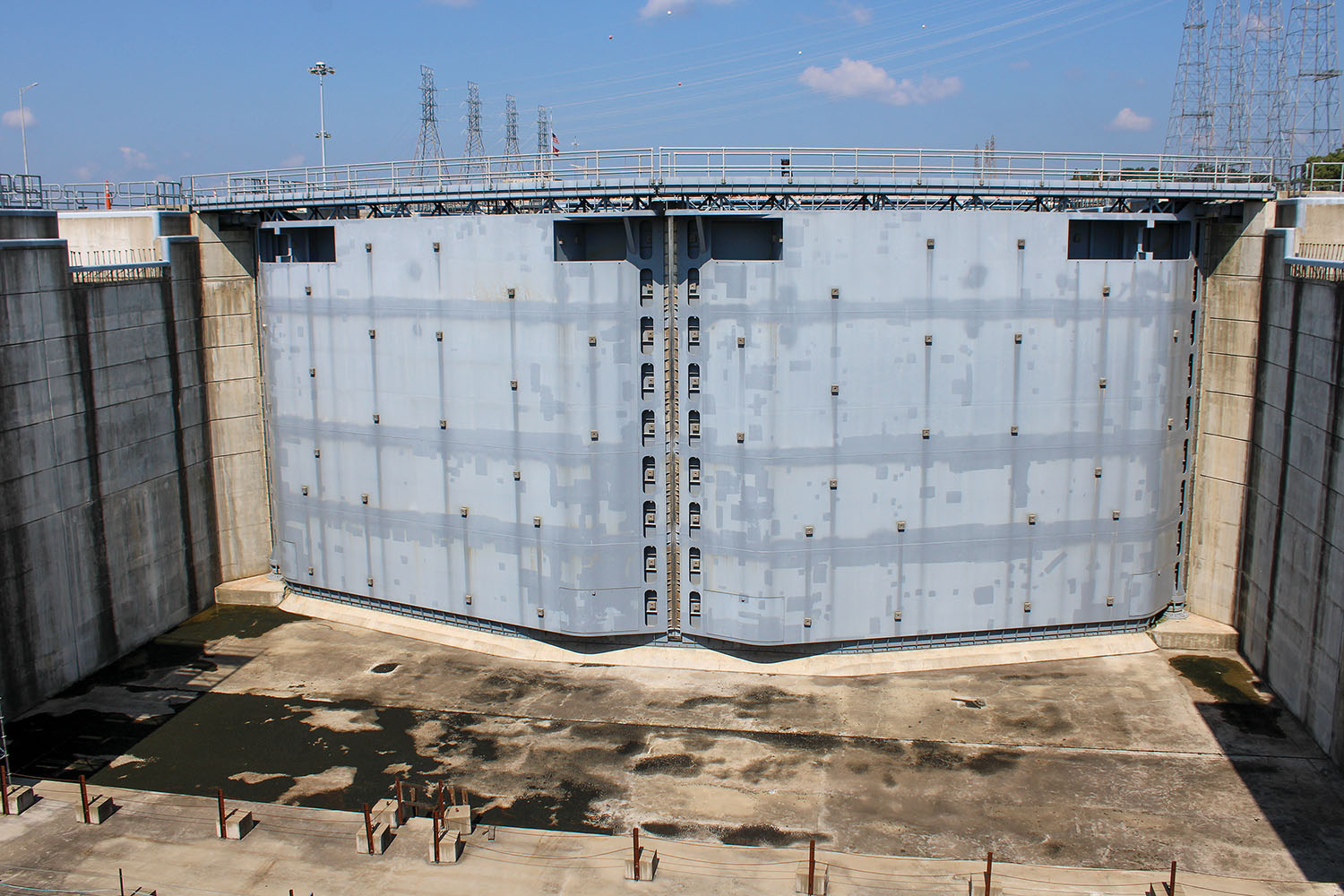 Crews expected to begin pumping water out from behind a cofferdam within the next few days as the Kentucky Lock Addition Project moved forward.

The cofferdam was completed in March. Excavation for the new 110-by-1,200-foot lock—double the length of the existing 110-by-600-foot lock—is past the halfway point, said Zach Langel, project manager for the Nashville Engineer District. The excavation contract is expected to conclude in mid-2022.

The lock addition is being built landward and adjacent to the existing lock. The Corps is set to meet a major milestone with the awarding of a $250 million contract for the downstream lock monoliths within the next 30 to 60 days.

“As of now, we’re forecasting out to a 2029 completion,” Langel said, noting that schedule captures the likelihood of inclement weather and poor site conditions but requires continued full and efficient federal funding from Congress. Any additional funding received as part of a congressional infrastructure package could aid in sequencing the work to allow for a potentially advanced construction pace, he said.

A group of media professionals toured the lock and talked to key staff members at the resident office August 24 as part of the Waterways Council Inc.’s (WCI) annual media tour. WCI is an advocacy organization that seeks, in part, to increase awareness of the importance of building and maintaining infrastructure along the country’s inland waterways.

Kentucky Lock and Dam is a unique partnership between the Corps, which constructs, operates and maintains the locks, and the Tennessee Valley Authority (TVA), which owns the property and uses the facility for creation of hydroelectric power and flood risk management. Construction on the lock addition was authorized in 1996 but didn’t receive substantial funding until 2015, Nashville Engineer District resident engineer Jeremiah Manning said. Much of the funding instead went to the Ohio River’s Olmsted Locks and Dam, which was completed and dedicated in 2018.

The Kentucky Lock addition is badly needed, navigation manager Caleb Skinner said. The lock, at Tennessee River Mile 22.4, is considered the gateway to the Cumberland and Tennessee river system, comprising 29 percent of the Ohio River basin.

Kentucky Lock passes approximately 57 million tons of cargo annually, valued at more than $10 billion, according to Corps data. Common cargoes include building supplies and petroleum products, many of which are headed to Nashville, Tenn. Diesel and gasoline cargoes are up 300 percent over the last few years, Skinner said.

The typical delay for vessels waiting to lock through from the Tennessee River to Kentucky Lake or from the lake to the river has grown to about 12 to 13 hours this year, Skinner said. That makes it a major bottleneck with one of the highest average delays of all locks in the country, according to the Corps of Engineers.

The Corps recognizes four categories of vessels that use the lock and prioritizes them according to category. First through are government vessels, such as Coast Guard buoy tenders and dredges. Next are pay-for-hire passenger vessels, such as cruise ships. Commercial vessels are third and make up the bulk of the vessels locking through, Skinner said. Finally, recreational vessels also use the lock and are granted a special lockage opportunity after three other lockages have taken place.

The existing lock can pass nine average-sized barges through at one time. A typical tow in the area is 15 barges, which requires double or triple locking. The entire process takes about 3½ hours with the existing lock. It will be cut to about 35-45 minutes with the new lock, Skinner said.

The Corps calculates that delays cost each tow roughly $500 an hour and notes that delays can total more than $100,000 a day at the lock when they are excessive. When the second lock opens, those delays should be eliminated, Skinner said.

Projects already completed have been for the powerhouse island access/bridge, highway and rail bridges, the upstream cofferdam, upstream lock monoliths and the downstream cofferdam.

While the lock excavation and downstream monoliths contracts are not expected to affect vessels locking through the dam, Skinner said there will be impacts to navigation once the 1,200-foot approach wall is being built. That will likely include the use of a helper boat at the site, he said, stressing that the Corps continues to work closely with industry to minimize those impacts.

Caption for top photo: The upstream miter gates for the new lock chamber have already been built but are currently on dry land. (Photo by Shelley Byrne)