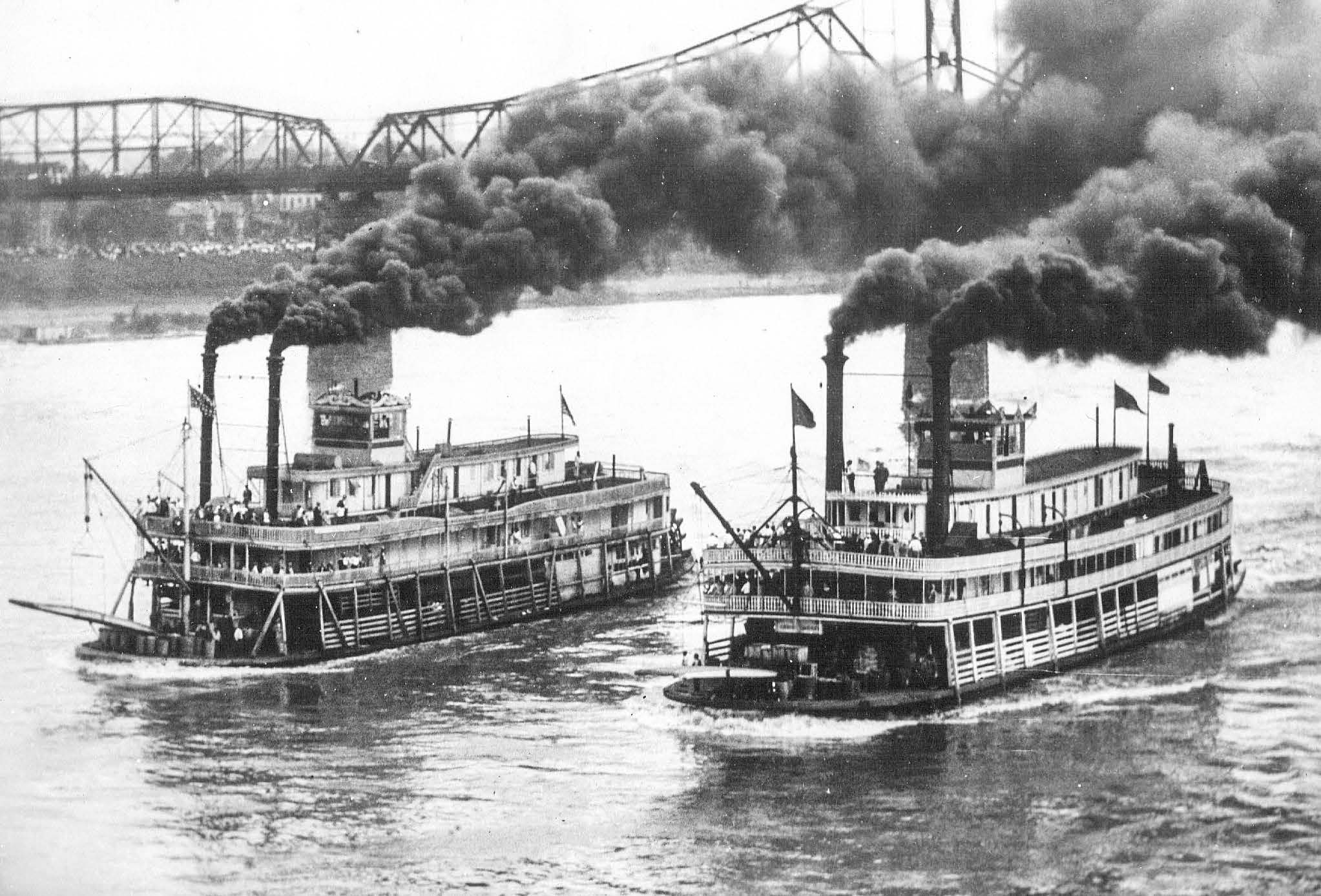 The Betsy Ann And Chris Greene Raced 93 Years Ago

Slightly over nine decades ago, on July 24, 1928, the old river tradition of steamboat racing was revived at Cincinnati, Ohio. Tens of thousands of cheering spectators lined the banks of the Ohio as the sternwheelers Betsy Ann and Chris Greene raced upstream some 26 miles to New Richmond.

The Chris pushed into an early lead and crossed the finish line by two boat lengths to claim the gilded antlers, symbol of riverboat supremacy. Capt. Chris Greene was in command of his namesake, while Capt. Charles Ellsworth was master of the Betsy Ann; the owner, Capt. Fred Way, was also on board. The race made front-page headlines in newspapers across the nation.

Built at Dubuque, Iowa in 1899 by the Iowa Iron Works, the steamboat was constructed on an iron hull that measured 165 feet in length by 33 feet in width. Originally, one boiler provided steam to cross-compound condensing engines built by the Clinton Novelty Iron Works. The riverboat was owned by Rufus F. Learned, of Natchez, Miss., and named for his wife. The Betsy ran principally in the Natchez-Bayou Sara trade and carried the U.S. mail. The whistle came from the packet Stella Wilds, built in 1886.

The boat was sold in 1921 to D. Grover Gill, of Gallipolis, Ohio, who, along with other investors, ran it in various upper Ohio River trades.

In latter 1925, Frederick Way Sr. and Jr. bought stock and operated the vessel in the Pittsburgh-Cincinnati trade into 1929. In the autumn of 1931, the boat was chartered to tow cotton at Memphis. The Betsy was sold to John Hay in early 1932 and converted into a towboat. Dismantled at the St. Louis wharf in 1940, the hull eventually became a boat club on the Meramec River until it sank in 1953; remains can be seen today.

The boat’s pilotwheel is now exhibited in a Cape Girardeau, Mo., museum. The roof bell reposes on the grounds of Stanton Hall, at Natchez. Capt. Don Sanders and this writer uphold a tradition of giving the bell three taps in memory of Capt. Way when visiting the historic river city.

The second steamboat to carry the name Chris Greene, this vessel was built at Charleston, W.Va., in 1925. The steel hull (189 feet in length by 42 feet in width) was constructed by the Ward plant and the superstructure by the Gardner Docks at Point Pleasant. The engines were recycled from the steamer Tacoma. Built for Greene Line Steamers under the supervision of Capt. Jesse P. Hughes, the packet originally operated in the Cincinnati–Pomeroy–Charleston trade. After 1934 the riverboat ran in the Cincinnati–Louisville trade.

The passenger rooms were removed in 1936 to provide space to carry automobiles.

The boat was notorious for breaking paddlewheel shafts (seven in all) and ran through itself more than a dozen times. Retired in 1947, the Chris ultimately was sold to George Harrison, of Dayton, Ky., to become a boat harbor. Largely destroyed by fire in 1968, the hull was later towed to Melbourne, Ky., and beached, where it remains today.