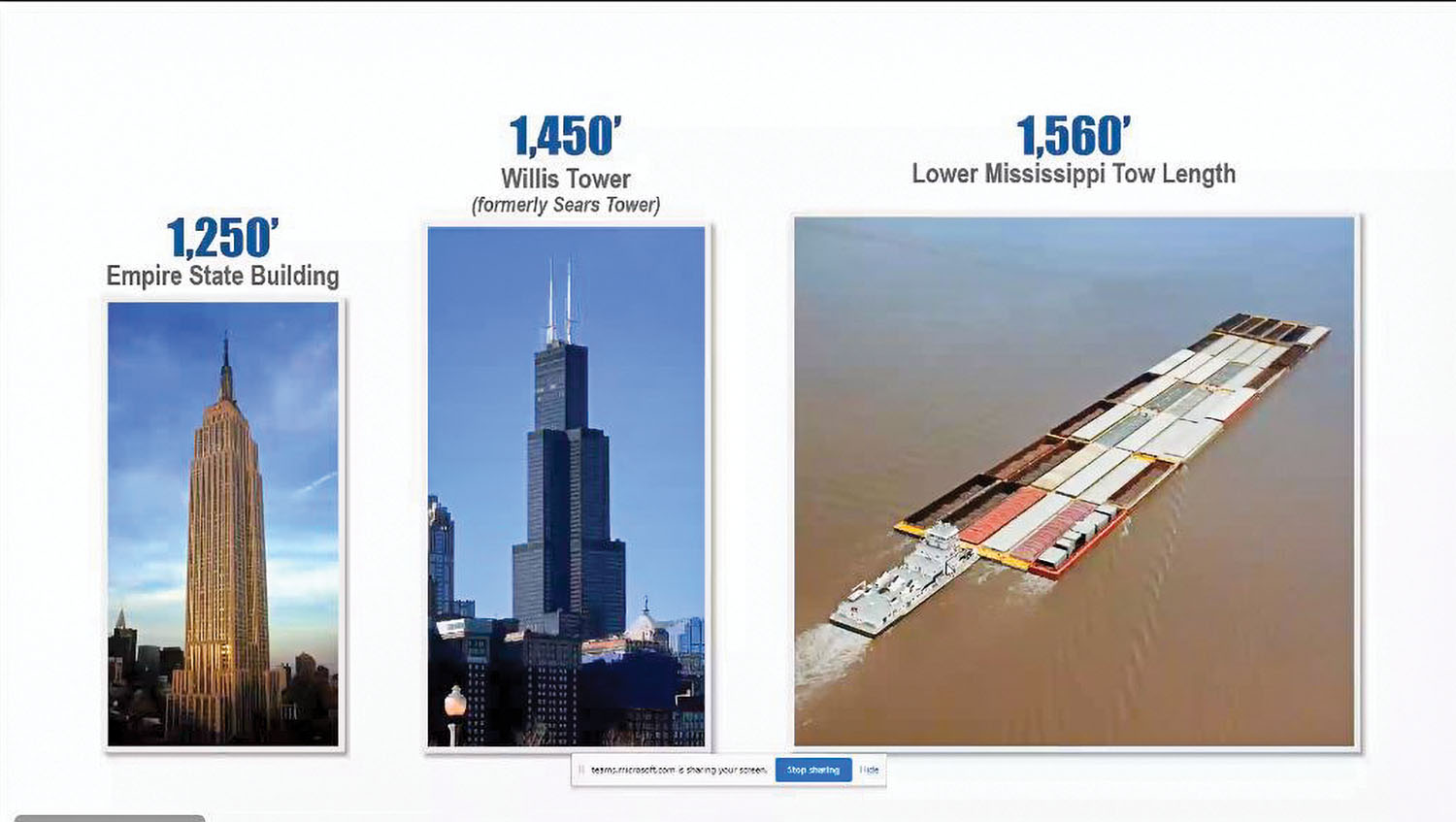 Calling it “Barging 101,” Women in Maritime Operations (WIMOs) offered the first of a series of webinars October 20 to educate membership on the basics of the towboat industry.

The group plans to host a Dredging 101 webinar November 9 with information presented by Great Lakes Dredge & Dock and a Barging 102 course in the first quarter of 2022, founder and executive director Kasey Eckstein said.

“We’re going to try to do these things as much as possible,” Eckstein said of the webinars.

She has pointed out previously that although the group’s members work within the maritime industry, many of them do so in office-based jobs and are not as familiar with the day-to-day operations on the river. The webinars and other membership events, like operational tours, give the women a chance to learn, ask questions and network among each other.

“Our No. 1 initiative is education,” Eckstein said, adding, “We believe through providing education to our members they will engage more in their careers and then elevate themselves if they choose to do so.”

Locking boats work on the Upper Mississippi, Ohio, Illinois, Tennessee and Cumberland Rivers and may have nine to 15 barges and eight or nine crew members.

Both types of boats generally have cooks and engineers, with deckhands working six hours on and six hours off watch twice a day and captains taking two, 12-hour shifts.

Canal boats are smaller. Although they have live-aboard quarters, the crew cook for themselves typically, and there is no boat engineer. Instead, a port engineer typically works in the area.

Finally, Normand mentioned the harbor or fleet boats, which don’t generally have crews that live aboard. Those are often referred to as “lunchbucket” boats.

Open hopper barges average 200 feet long by 35 feet wide and typically have a standard 13-foot depth. They can carry up to around 1,700 tons of cargo but may be loaded light depending on the available draft for the river, especially in times of high or low water.

“As most of us know, Mother Nature is our friend and our enemy at the same time in the barge industry,” Normand said.

Covered hoppers have fiberglass covers with lift doors for grains, fertilizers, wood pulp, wood chips and other cargoes that need protection from the elements.

People who are more familiar with dry cargo can think of the 10,000-barrel tank barges as nearly the same size as a regulation hopper barge, Eckstein said. They are 200 feet long by 35 feet wide by 12.5 feet deep, typically, and can hold 1,400 to 1,600 net tons of cargo or about 420,000 gallons of product, with some liquids heavier than others.

With tank barges, licensed tankermen are required to load and discharge the barges.

The Lower Mississippi River is the “superhighway” for barges, Eckstein said. She showed one example of a boat with 56 barges. The combined length of the towboat and barges can be taller than a skyscraper, she explained, showing a slide that compared the 1,250-foot Empire State Building in New York, the 1,450-foot Willis Tower (formerly Sears Tower) in Chicago and a 1,560-foot Lower Mississippi River tow.

While freight movements on highways and rail systems are approaching maximum capacity without a significant investment in infrastructure, “Amazingly enough, our industry has the capacity to easily double,” Eckstein said. “I don’t know any other industries that can say that they can easily double. So, that’s exciting for all of us, great job security, and I feel like it’s also part of our duty to recruit for this industry.”

Normand touted the comparative environmental friendliness of the industry, pointing out that one, 15-barge tow can move 26,000 tons, the same as 216 rail cars and six locomotives or 1,050 large semi tractor-trailers, according to the National Waterways Foundation (NWF).

It is also one of the safest, she said, highlighting NWF data showing that for each barge transportation fatality, there are 21.9 fatalities related to rail and 79 truck-related fatalities.

Normand then described the waterways system as a whole, with nearly 12,000 miles of waterway 9 feet deep or more and 193 lock sites with 239 chambers operated by the U.S. Army Corps of Engineers.

Many of those locks are operating well beyond their expected operational lifespans and are too small to efficiently accommodate the size of modern tows, so repairs and replacements are important, Normand said.

“We’ve got to put the money into them so they last beyond our lifetimes,” she said.

“I’m probably a little biased, but I feel like it is one of the most interesting and unique industries out there,” she said.

Caption for top photo: Screenshot from “Barging 101” WIMOs seminar: some tows on the Lower Mississippi are larger than skyscrapers.