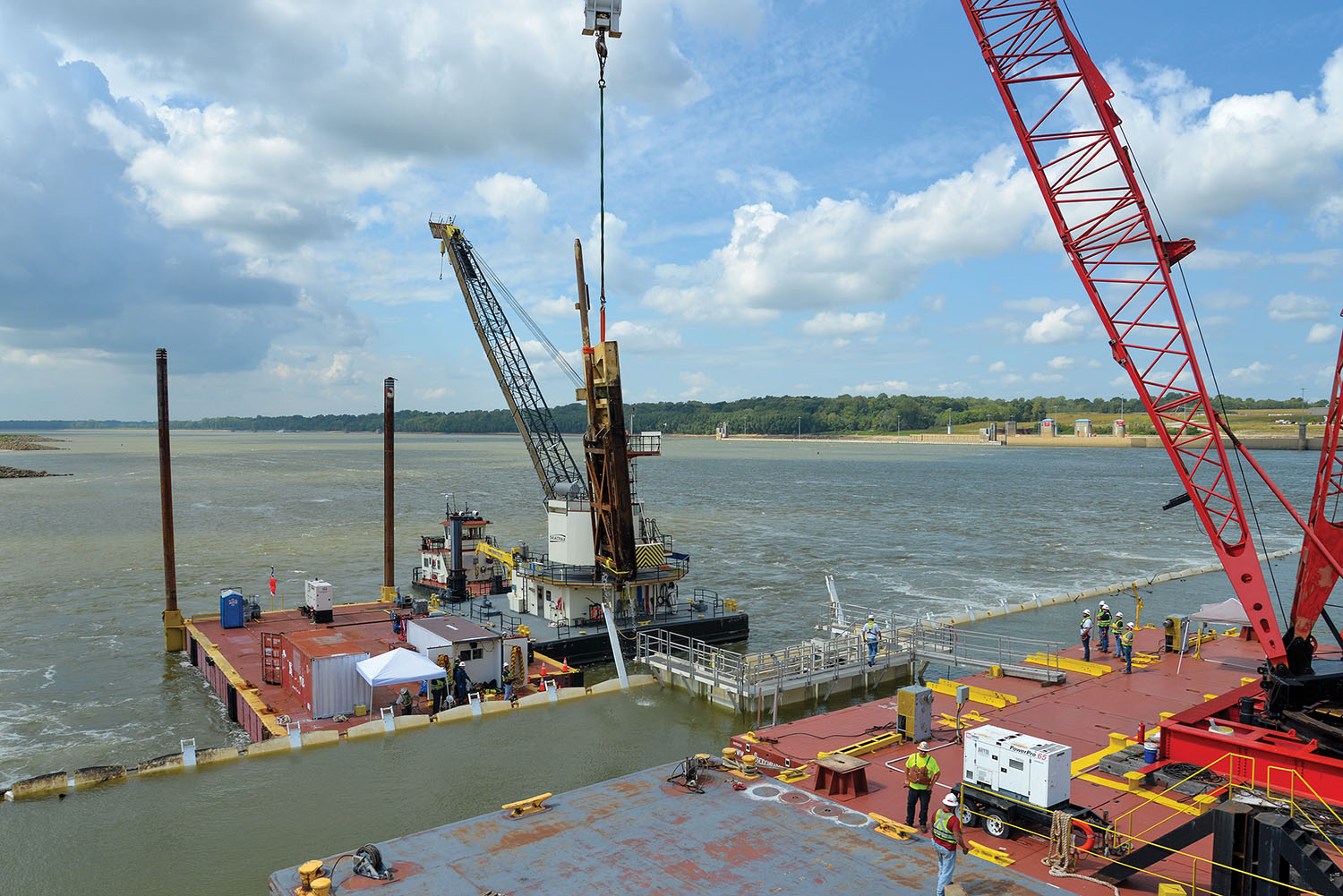 Louisville Engineer District employees replaced the first five wickets at the Olmsted Locks and Dam this year amid a season that saw them raising the wicket dam a record 10 times so far.

The Olmsted project, at Mile 964.4 on the Ohio River, opened in August 2018. It includes two lock chambers, a fixed weir, five tainter gates and a boat-operated wicket dam that lays flat on the bottom of the river during high flows but is raised into position in lower flows to impound water, ensuring a navigable depth upstream to Smithland Locks and Dam as well as Barkley Lock and Dam on the Cumberland River and Kentucky Lock and Dam on the Tennessee River.

More than 70 million tons of commerce passes through the facility each year, making it one of the busiest in the country.

The wicket dam consists of 140 steel wickets, each 10 feet wide and 28 feet long. They weigh approximately 36,000 pounds each, and the Olmsted staff is responsible for raising and lowering them.

“The plan is to replace all the wickets every 10 years, so that will have us replacing 14 a year to keep up with that,” said Ryan Lawrence, assistant operations manager for locks and dams for the Louisville district. “This year, being the first year we did it, we spent a lot of time doing the prep work.”

The first wickets were replaced September 14 and September 15 before the dam was pushed down due to river elevations. Three more were later replaced.

“When we have good river conditions in the future, we’ll be ready to go,” Lawrence said.

It took about nine hours from beginning to end for the first two wickets to be replaced. Once removed, the old wickets are rehabbed and staged for future use.

The team trains for the replacements using a wicket test pit, a concrete pit wide enough for one wicket inside that includes a valve at the bottom to fill or remove water from it.

“It allows the crew to see and experiment without the obstruction of water and practice the dive process when conditions out in the river wouldn’t allow them to do the work,” Lawrence said.

Since many of the employees used to be at the old Locks and Dams 52 and 53, which used timber wickets, they are familiar with the basic process of changing out the wickets, he said, but they still practice it. That includes hooking rigging to the wicket in the test pit, laying it down flat, adjusting the rigging to be able to lift it out, standing the wicket up straight, removing the hardware at the base, removing the wicket, placing it on some cribbing on concrete at the top and then doing the entire process in reverse to place the wicket back in place in the pit.

“While we’re doing that, we’re imagining how conditions may be in the river and what we can do to mitigate that,” Lawrence said.

Working in the muddy water has its challenges.

“They can see for about a foot, so they have to be very close to what they’re working on to get a good visual,” Lawrence said.

A dive deflector box, a three-sided structure installed against the wicket dam to make a fourth side, allows divers to work on two wickets at a time, while ballast keeps it sunk. A shutter panel blocks the flow from instream and lowers the water level inside to drop to the same as on the downstream side of the wickets.

All of the work takes place without disruption to navigation as the 1,400 feet of wickets are on the opposite side of the river to the twin, 1,200-foot locks, and the locks have long approach walls in place to keep vessels away from the wickets.

The work has taken place in what has turned out to be an unusual season, Lawrence said. The Olmsted wicket dam was raised only once in 2018, twice in 2019 and three times in 2020, but has been raised 10 times so far in 2021.

In some ways, Lawrence said, it feels like there was no break between the 2020 and 2021 season. Looking back in 2018 through 2020, Lawrence said employees would start raising the wickets in June or later and have them down by November.

“This year we raised in January,” Lawrence said.

The unusual pattern continued in February, April and May before evening out to a more typical pattern for the summer months. Low water levels then continued into the fall, including a period from September 28 through October 31 where the wickets were raised 34 days. They were expected to be raised again sometime this month.

“It’s just been a very atypical year,” Lawrence said, noting that the crew must react to what the weather does, not only along the Ohio Valley but also on the Mississippi, downstream just 17 miles, and on the Tennessee and Cumberland rivers upstream.

“The Mississippi this year was lower than normal, which is interesting because in 2019 it was higher than usual, so we didn’t raise at all until September of that year. So I think what we’re seeing is kind of the ebb and flow of what these river systems do. Sometimes you’ll have a high Mississippi and a low Ohio. Sometimes they’ll both be high, and sometimes they’ll both be low.”

Regardless of what Mother Nature brings, he said, the crews will be ready to respond appropriately, raising and lowering the wickets and replacing them as opportunities present to ensure a well-maintained wicket dam essential to the navigation industry.

Caption for top photo: Right: A three-sided dive reflector box blocks the river flow and lowers the water level inside the box, allowing divers to work on two wickets at a time. (Photo by by Abby Korfhage/Louisville Engineer District)