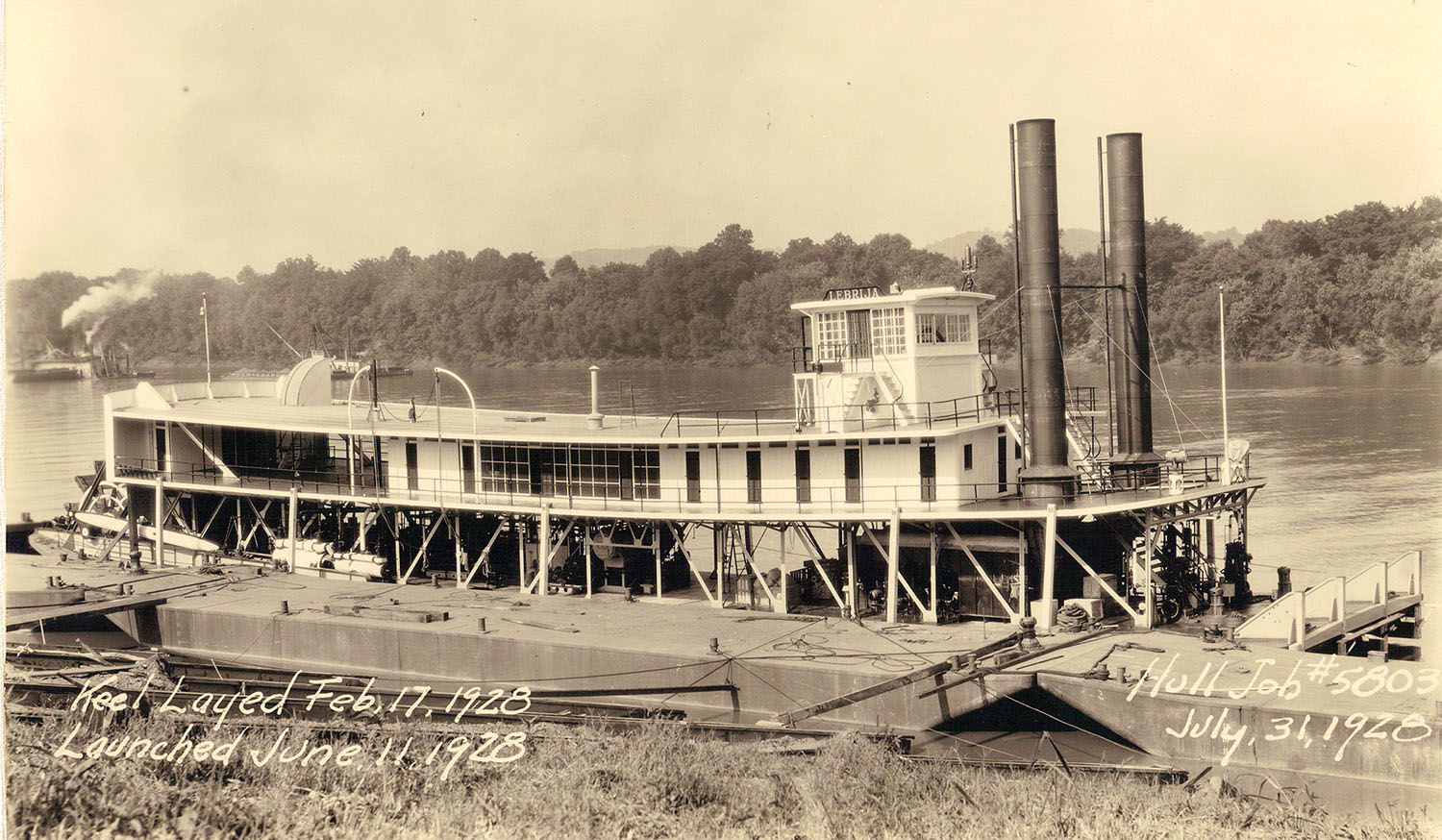 Towboats For South Of The Border

The Marietta Manufacturing Company was started in 1852 by the W.F. Robinson Company at Marietta, Ohio. Initially constructing sailing vessels, the firm soon commenced building steam-propelled craft for commercial service on the western rivers system. The company was a pioneer in the use of steam capstans and steering gear. As a foundry, it manufactured stoves, metal castings and plows.

Narrowly escaping destruction from the disastrous Ohio River flood of 1913, the firm relocated to Point Pleasant, W.Va., in 1915. A new shipyard was developed on a 42-acre site, including a marine railway and a 2,000-ton drydock facility. In addition to the construction and repair of riverboats and barges, the company also produced pipe mills and crane booms.

With the onset of World War II, employment reached 3,000 people, and the yard became a major producer of tugs for the United States Army.

Following the war years, employment steadily declined; the last vessel was delivered in 1965, and the yard closed in 1970. The facility was taken over by Amherst Industries in 1972 and operated as Point Pleasant Marine until 1984.

The hull numbering system for Marietta Manufacturing runs from 100 through 913, indicating that some 800 boats and barges were built by the firm.

According to Capt. Charles Henry Stone (1915–2010), well-respected riverman of Point Pleasant, Marietta Manufacturing Company produced 11 steam sternwheel towboats and several barges for the Imperial Oil Company of Colombia, South America. The oil company was a subsidiary of the International Petroleum Company of Canada; it was operated out of the home port of Cartagena, Colombia, located on the Magdalena River. The port site was situated in northern Colombia with an entrance to the Magdalena River from the Caribbean Sea.

The image for this week’s Old Boat Column presents the towboat Lebrija. The sternwheeler was launched on June 11, 1928, and it departed the yard of Marietta Manufacturing in August. The other towboats constructed at the shipyard were the Oron, Carae, Guaybito, F.C. No.1, Funza, Zapatoca, Porce, Infantas and Cascajales.

All of the vessels had their trial runs on the Ohio River before making the 2,000-mile trip down the Ohio and Mississippi to New Orleans. Before departing the shipyard, the riverboats were partially boarded up for transport. After reaching New Orleans, each boat was boxed up with the smokestacks laid over and strapped down. The wooden bucket planks were removed from the sternwheels, and other safety precautions were taken before tugboats pulled the new steamboats across the Gulf of Mexico and into the Caribbean Sea.

When the boats arrived at Cartagena, they were met by an engineer from Marietta Manufacturing to supervise crews who returned them to running order. Several of the boats were dismantled, shipped to South America and reassembled upon arrival. Capt. Stone recalled that the first boat, the Oron, reportedly was lost at sea and never seen again.

In 2006, a comprehensive history of the Marietta Manufacturing Company was published and is available.