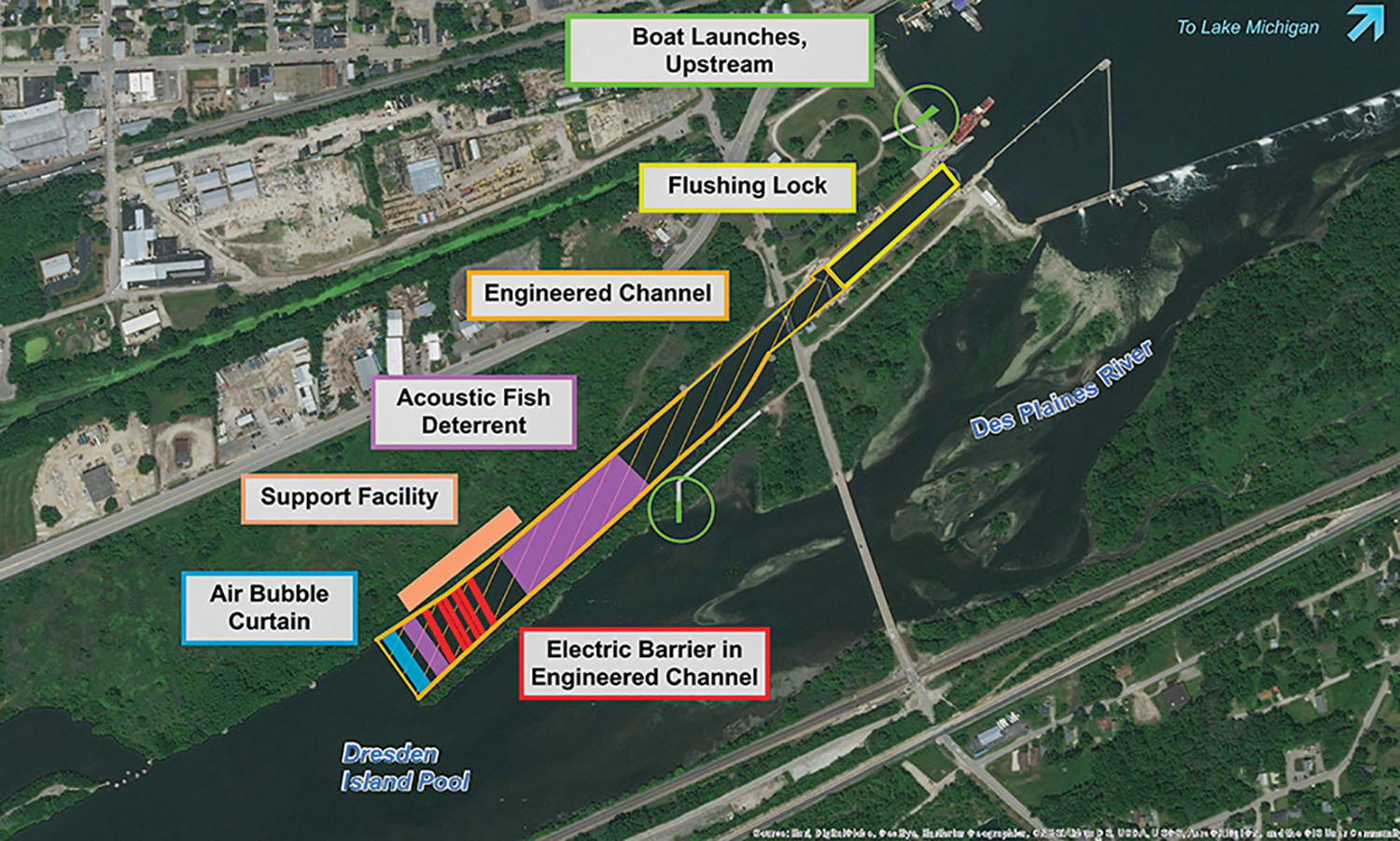 Brandon Road Project Is In Engineering And Design Phase

The Brandon Road Interbasin Project, a complex, layered barrier against Asian carp that will use several different carp-deterring technologies to keep Asian carp from migrating from the Illinois Waterway to Lake Michigan, is in the engineering and design phase. Actual construction won’t begin until 2024 at the earliest. The Brandon Road Lock and Dam has been identified as a key choke-point where Asian carp must be stopped. In the upcoming year, data gathering and modeling are due to be completed for the project.

The planned redundant layers of prevention include a bubble curtain; an acoustic deterrent; an electric dispersal barrier; and a flushing lock. The first construction contracts are set to be awarded in 2024, according to the project’s website.

Pre-construction engineering and design began December 29, 2020, when the state of Illinois signed a design agreement with the Rock Island Engineer District. This phase of the project is estimated to last three years, cost $28.9 million and be cost-shared 65 percent federal, 35 percent non-federal.

The state of Michigan contributed $8 million to Illinois to help with the $10.1 million non-federal portion. During the first 60 days, a project management plan was developed by the team. It included a formal governance structure that will provide input and resolve conflicts throughout the project’s planning and construction.

In mid-May 2021, a meeting was held allowing members of the leadership teams a chance to meet face-to-face to discuss detailed elements of the plan and to sign a project charter.

Upon receipt of project funding, the team began planning and design for the project’s structural and non-structural elements. Specialized meetings, known as design charrettes, among design team members were scheduled to allow the partners to collaborate on the project’s conceptual design as well as schedules, budget, cost estimates and resource allocations.

Since the beginning of 2021, three design charrettes have been held, and several more are planned. Real estate options and alternatives for project use and acquisition are also underway.

In addition to design charrettes, the project delivery team also conducted its first navigation workshop in early June. This event provided navigation industry stakeholders with an update on the project and allowed them to provide valuable input from a user’s perspective on the current modeling and engineering efforts.

Over the next several months, the team will advance data gathering efforts to aid the design process. Scaled physical modeling and computer simulation will continue, and bubbler safety testing will be conducted at the Peoria Lock. Geotechnical exploration will occur at the project site to determine the best location for the project controls in relation to the lock and project features.

Caption for photo: A map overlay shows the planned anti-carp measures at Brandon Road Lock and Dam on the Des Plaines River.