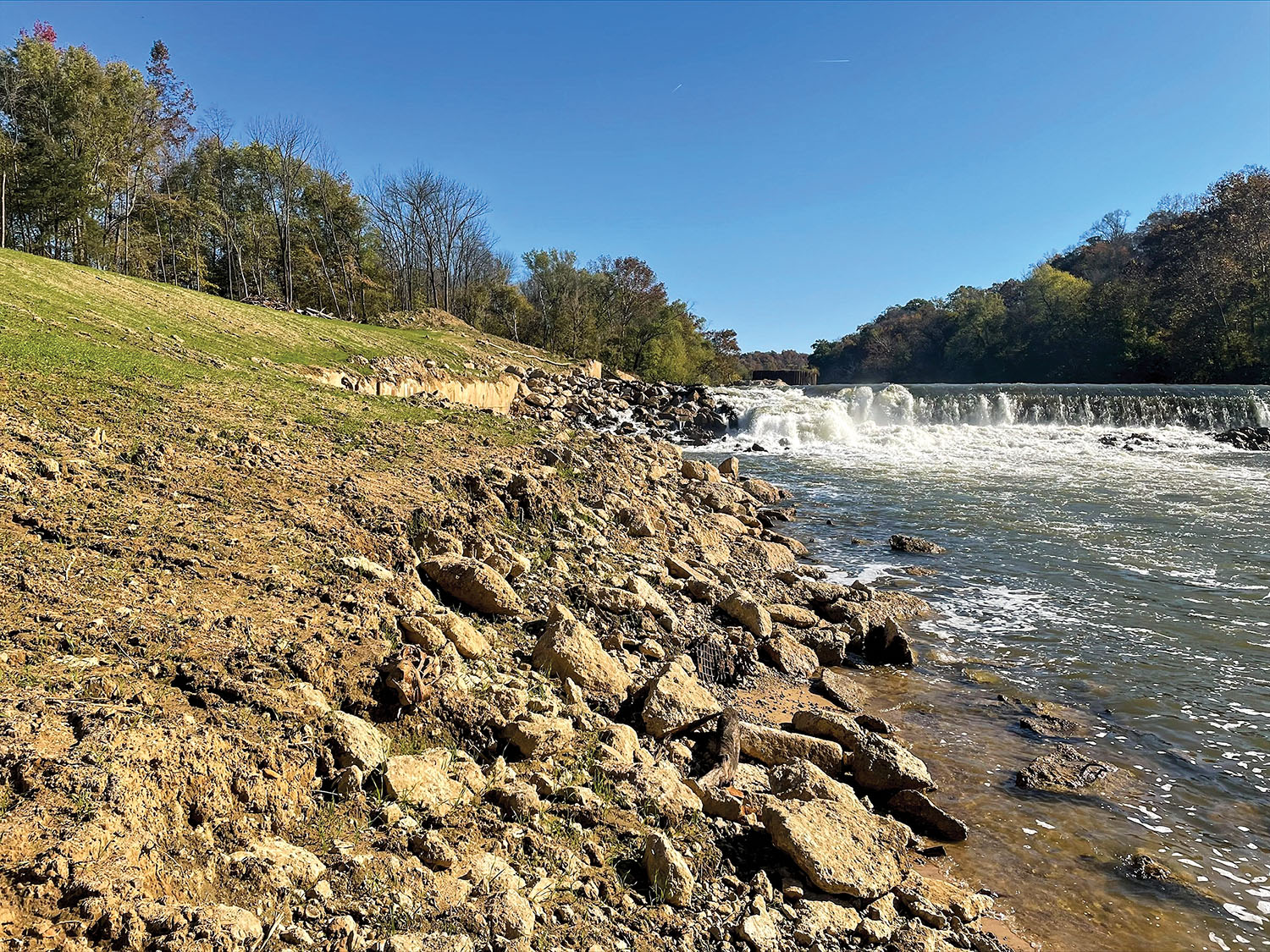 The removal of a Green River Lock and Dam unused for the past 70 years will improve safety, allow better environmental conditions and create a new recreation space for users to enjoy without affecting navigation, proponents say.

The Louisville Engineer District, in partnership with the U.S. Fish and Wildlife Resources, the Nature Conservancy and Kentucky Waterways Alliance, held a celebration earlier this year to mark the removal of the lock chamber and upcoming removal of the dam at Lock and Dam No. 5 near Roundhill, Ky. When completed in 2022, the removal will return 73 river miles to their natural, free flow. The Corps said it was the largest dam removal in Kentucky history.

The dam’s removal has no effect on commercial navigation, as modern traffic on the Green River stays downriver. The 384-mile river is navigable only to the closed Lock and Dam No. 3, known as the Rochester Dam, at Mile 108.5. Lock and Dam 5 is at Mile 168.1.

As of September 2014, the Corps had recommended congressional deauthorization for locks and dams 3, 4, 5 and 6 on the Green River, along with Lock and Dam 1 on the tributary Barren River. Lock and Dam 5 is the second lock and dam to be removed, following Lock and Dam 6 in 2017.

Green River Lock and Dam 1 and 2, which are still authorized for commercial navigation, are not impacted by the project, according to the Corps. Additionally, Green River Lock 3 remains in place and is being stabilized by a local entity as part of the transfer of property.

The U.S. Fish and Wildlife Service led the $4.6 million removal project, which began in June. Although originally anticipated to conclude with the breaching of the dam in late September, high flows at the site caused a delay, said Chris Wernick, project manager for the Louisville district.

“Next summer, once we have good water conditions, they’ll be back out to ensure the job is complete,” Wernick said.

The dam is now projected to be breached during the same period crews are in the area to remove Lock and Dam 1 on the Barren River, he said.

Wernick estimated the Lock and Dam No. 5 removal project as half complete, but he said crews need about 30 days of low water to remove the concrete dam. That will take place using breakers, which he described as being akin to giant jackhammers mounted on excavators. The breakers create a 1- to 2-foot notch in the crest of the dam, allow the water to equalize on both sizes, and then break away another chunk of concrete, a little at a time.

Following completion, The Nature Conservancy will take ownership of the site. The project was funded through the Department of the Interior’s National Fish Passage Program.

“I think it’s a big win for us and for local communities with these projects,” Wernick said.

The removal of the locks and dams is designed to benefit species that thrive in moving water. These include many aquatic insects that serve as food for foraging bats, including three bat species that are endangered.

The Green River is one of the most biodiverse rivers in the country, said Dave Dreves, acting fisheries director for the Kentucky Department of Fish and Wildlife Resources.

The removals of the locks and dams will also improve safety and access for people who enjoy spending leisure time on the river.

Canoers and kayakers on the Green River in Mammoth Cave National Park are now be able to safely paddle past Brownsville, with no in-stream barriers between Mammoth Cave and the Rochester Dam. That will allow multi-day canoe and kayak trips for those interested in taking them.

Black bass populations, including smallmouth species, should also increase in numbers because of the dam removals, Dreves said. That will be a benefit to those who enjoy fishing in the area.

He added that the Louisville district is proud to be a part of the partnership, “and we look forward to seeing the Green River free-flowing again soon.”

Green River Lock and Dam No. 5 was built in 1933-34 for commercial use, including the barging of coal from the area’s strip mines. Wooden barges hauled asphaltic sandstone mined in the nearby town of Kyrock for paving. Packet boats hauled other cargo in both directions, including early visitors to Mammoth Cave.

The Corps ceased operation of the structure in 1951 due to it no longer being needed. However, it continued to create a pooled condition in the river with lower oxygen levels, more sediment and higher temperatures—all issues for aquatic life and the overall health of the river, the Corps said. The dam also presents a barrier to recreational boat traffic, with no portage or bypass options.

Removal of Lock and Dam No. 5 was championed by U.S. Sen. Minority Leader Mitch McConnell (R-Ky.), who called for federal legislation. That legislation, part of the 2016 Water Infrastructure Improvements for the Nation Act, was signed December 16, 2016, deauthorizing the dam from Corps inventory and directing its removal.

“Kentucky’s waterways form the backbone of our commerce, transportation, and recreation, but because of the Green River Dam—which sat unused since 1951—that important natural asset was threatened,” McConnell said at the September 20 ceremony. “With the completion of today’s removal, we will finally return the Green River to its original, unimpeded state and reopen a crucial portion of the commonwealth to boaters, sportsmen, and wildlife,” he said. “As Senate Republican Leader and a senior member of the Senate Appropriations Committee, I was proud to collaborate with local stakeholders to champion the 2016 Water Infrastructure Improvements for the Nation Act and subsequent appropriations measures for the U.S. Fish and Wildlife Service that made this removal project possible. I look forward to continuing my work to provide Kentuckians with the clean, healthy, and free-flowing water infrastructure we deserve.”

David Phemister, state director for The Nature Conservancy in Kentucky, called the removal of Lock and Dam No. 5 “a really big deal.”

“This has been about 20 years in the making, concerted effort over the last six, and it’s just a tremendous win for this river and the people who love it,” he said. “When completed, we’re going to have nearly 200 miles of connected free-flowing Green River.”

He added that the removal of the dams is not just an ecological victory but also a victory for river access and local economies.

“We’re committed to working with the local community, Butler County and others to make sure this is a public park accessible to all,” he said.

Caption for photo: The lock chamber at Green River Lock and Dam 5 near Roundhill, Ky., has already been removed. The dam will be removed next summer. (Photo by Chris Wernick/Louisville Engineer District)