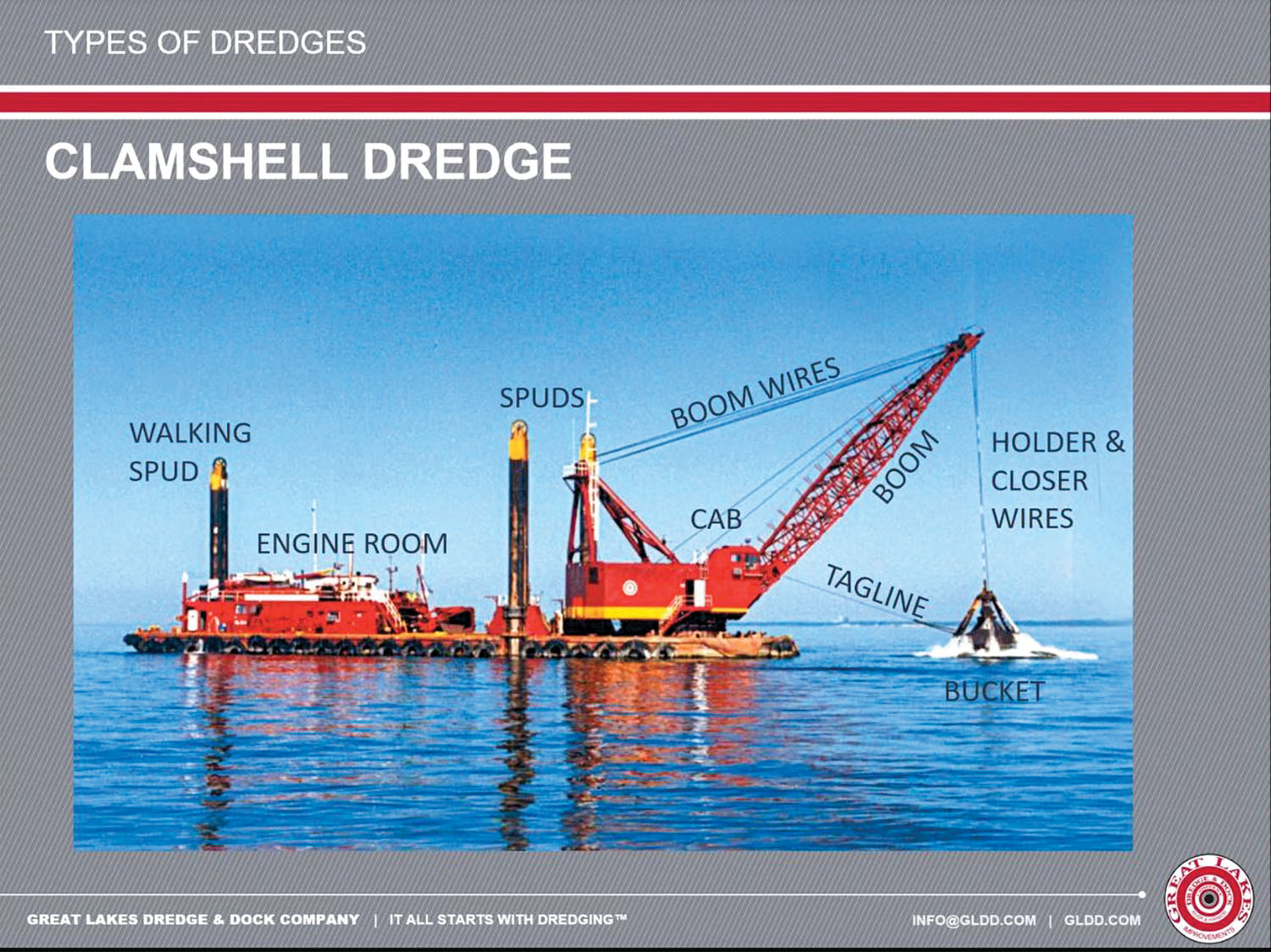 More than 50 members of Women in Maritime Operations (WIMOs) learned about dredging during the organization’s Dredging 101 webinar November 9.

Sean Duffy of The Big River Coalition and David Johanson and Ashley Richardson of Great Lakes Dredge and Dock Company (GLDD) went over the basics of dredging for members.

Johanson and Richardson began their portion of the presentation with information about GLDD. The company was founded in 1890 in Chicago, Ill., and moved to Houston, Texas, in fall 2020. It is the largest dredging company in the United States, with roughly 1,200 employees and annual revenues of $750 million, Richardson said. It has five hopper dredges currently serving the domestic market with another one being built, she said. The company also has five mechanical dredges serving the domestic market and five ocean-class cutter suction dredges and two inland-class cutter suction dredges.

Richardson described a dredge as a vessel outfitted with the equipment needed to excavate underwater materials. Dredge projects can include beach renourishment and coastal protection, port and ship channel maintenance, marsh creation and port and channel deepening.

“We have various dredge types because each of them have their own strengths and their own challenges,” she said. “Each of these different types of equipment is specialized to excavate, whether it be mining for sand offshore to rebuild beaches or digging hard rock to deepen ports and harbors.”

Johanson provided a summary of how cutter suction dredges work, dredging and removing material at the same time through a pipeline.

The massive cutters, similar to giant drill bits, cut through all kinds of material, including breaking virgin rock, he said. One downside to using cutter suction dredges is that they require a lot of equipment, including some to move anchors and to add and remove pipeline.

“They can move the most material in the shortest amount of time,” he said. “They’re ideal for pumping short to medium distances.”

One project GLDD and The Big River Coalition worked on together involved using a cutter suction dredge to pump sand 23 miles through a pipeline from the Mississippi River to Scofield Island in Louisiana, a record distance for a 30-inch pipeline dredge, Johanson said.

“One thing that’s unique about a cutterhead dredge is that it’s affixed to the bottom with a cutterhead, but also it has spuds in the stern. They dig on the one spud, and on the other one they walk ahead.”

He described them slowly walking forward with the left and right spuds, “like Frankenstein.”

“It can’t go very fast, but it can move a couple of feet at a time, which is enough to advance as we’re digging the channel forward,” Johanson said.

A rule of thumb is that a cutterhead dredge can swing as wide as it is long.

Richardson provided an overview of the trailing suction hopper dredges, which are self-contained and and self-propelled. They have drag heads that drag pumping equipment across the waterway’s bottom to suck up slurry, a mixture of sediment and water, in a similar way to a vacuum cleaner, she said.

“They need minimal auxiliary support equipment,” she said. “They can function independently, and they’re really ideal when the borrow source of the material is a great distance from the disposal site or benefit reuse site.”

Instead of using miles of pipeline, the dredged material is pumped into a hopper that holds it and allows sediment to settle before skimmers remove the superfluous water. The dredge then hauls the sediment to the disposal site or beneficial use area and dumps it.

A split-hull dredge is designed for the hull to separate down the middle from fore to aft, allowing dredged material to fall out of the opened hopper. Some hopper dredges instead have a bottom dump door.

Hopper sizes can vary. For example, the Liberty Island has a bin capacity of 6,500 cubic yards of materials in every load, Richardson said.

“To put that in perspective, a typical full-size dump truck is about 10 to 15 cubic yards, so she can carry a massive amount of sand in her hull,” she said.

While cutterhead dredges may have downtime because of difficult weather conditions, hopper dredges can operate in higher sea and wind conditions.

Clamshell dredges operate using cranes, usually lattice-boom cranes, and are operated by licensed crane operators. They are so-named because “The bucket actually closes together and looks like a clamshell,” Johanson said.

He described them as similar to a grapple that grabs a lobster out of a lobster tank at a restaurant.

Clamshell dredges are good for projects where precision is important, he said, adding, “It’s the perfect machine for maintaining ports and harbors.”

Clamshell dredging is the least expensive method of dredging but also produces the lowest quantity of dredged materials, Johanson said. Once it picks up the material from the bottom of the waterway, it loads it into a scow or material-handling barge.

Clamshell dredges are most effective when used a long distance from a disposal site, digging soft or loose materials and digging at deep depths. They come in different sizes, removing as little as 12 or 13 cubic yards of materials with one “bite” to removing as much as 50 cubic yards at once. “So our big clamshell dredge can pick up four dump truck loads at one grab,” Johanson said.

Clamshell dredges have spuds, but instead of swinging the dredge back and forth as they do on a cutterhead dredge, they affix the clamshell dredge to the bottom so that it has something to pull against when it is picking up material in the bucket. Sometimes they also have a walking spud, Johanson said.

“The crane rotates, not the barge,” he said.

Backhoe dredges incorporate a backhoe that is usually mounted on a pedestal and rotates on it while being internally connected to a barge. Instead of a crane, they have a two-part arm. They don’t require many support vessels, Johanson said.

“They do have limited digging depth by the length of the arm, but they do have a lot of power,” he said.

That allows them to dig virgin rock as well as sand as well as to pick up large boulders.

The different types of dredges are sometimes accompanied by auxiliary equipment. One example Richardson pointed out is drill boats, which can pre-treat rock, drilling holes to allow blasting patterns for dynamite to fracture the rock before dredging.

The BRC is committed to ensuring the future of navigation on the Mississippi River ship channel. It focuses on maximizing efficient transportation on the deep-draft channel from Baton Rouge to the Gulf of Mexico, including helping to reduce and/or prevent adverse impacts related to flood protection, protecting water supplies, recreational boating and fishing, preventing the spread of invasive species, restoring coasts and minimizing the negative effects of runoff and pollutants. Missions are focused on securing increased funding from the Harbor Maintenance Tax and the inland waterways fuel tax, efforts to deepen the Lower Mississippi River to 50 feet and to increase the beneficial use of dredge material, which Duffy calls “sediment recycling.”

The BRC is at the forefront of efforts to deepen the Mississippi River Ship Channel to 50 feet. He updated participants on it, noting that the dredging of the first phase started May 7 and that the dredging of the crossings started October 8. Two dustpan dredges, whose operations he described as similar to leaf blowers, are working on the project from Mile 175 at Smoke Bend on downriver.

Some impediments are at the Venice Corridor, he said, as two pipelines and an energy cable are known to be in the area, but it is unclear how deep they are. The Corps of Engineers is bringing in Department of Defense technology over the next couple of weeks and hoping to have them located and a solution in place by Thanksgiving, he said.

“If they do, I would expect the pilots to be able to open the lower river,” he said.

Duffy also talked about the importance of beneficial use of dredged materials.

“My message the whole time has been don’t call it spoils,” he said. “It’s a resource, and we need it.”

He noted that a test project using a cutterhead dredge in Southwest Pass in 2009 allowed the restoration of 100 acres of marsh in the Head of Passes area.

“Pilots started calling me and saying hey, Sean, we need to put some material over here. We need to do this. We need to do that. Thirteen thousand acres later, we’ve done it every year since. Last year was the first year over 2,000 acres were restored. On multiple occasions the last five or six years, we’ve added over 1,000 acres.”

“They want every bucket of sand we can get,” he said of landowners in the area. “It’s amazing to see the impact on the environment. You see nesting birds with eggs, and the land gets populated with its own vegetation pretty quickly, and the critters find it in a few hours at times.”