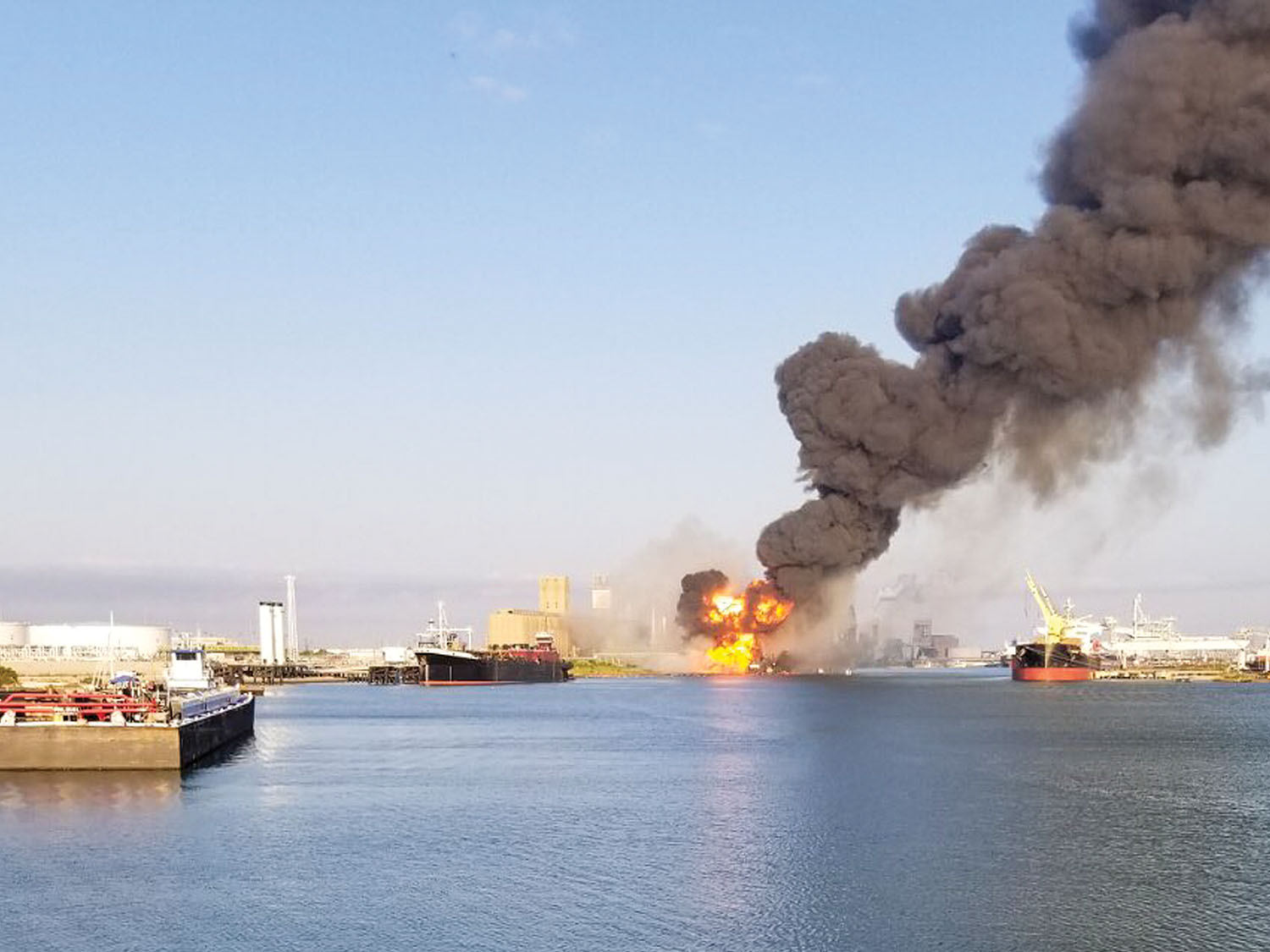 Numerous serious shortcomings and deficiencies in safety planning and risk assessment contributed to the “totally preventable” rupturing of a pipeline in the Corpus Christi Ship Channel by a cutterhead dredge on August 21, 2020, according to the National Transportation Safety Board. The NTSB held a virtual public board meeting December 7 at which final recommendations from its teams’ examination of the incident were accepted into the report.

“We have seen time and time again that tragedies happen when parties fail to have the appropriate policies and procedures in place for safety,” NTSB Chair Jennifer Homendy said. “Orion Marine Group’s inadequate planning led to this tragic event and cost lives. It is absolutely critical that when excavators conduct any dredging operations near underwater pipelines that proper precautions are in place to ensure safety.”

The pipeline rupture caused a huge fireball that enveloped and destroyed the dredge Waymon L. Boyd, operated by Orion Marine Group. Four crewmembers died immediately, another died later of injuries, and six more were seriously injured. The Waymon L. Boyd, valued at $9.48 million, was a total loss. Damage to the pipeline was $2.09 million, and damage to the Epic oil terminal was estimated at $120,000.

The accident occurred around 8 a.m. in the upper reaches of the Corpus Christi Ship Channel in the Tule Lake Channel. Initially, the U.S. Coast Guard closed the port’s inner harbor inward from the Harbor Bridge. Later, as incident responders began recovery and salvage efforts, the Coast Guard established a safety zone between the Chemical Turning Basin and Viola Turning Basin.

Emergency responders battled the fire aboard the Waymon L Boyd throughout the day August 21, with search and rescue efforts ongoing. The fire was finally fully extinguished around 10 p.m., when the vessel broke in two and sank. In the early morning hours of August 22, the body of one of the missing crew members was recovered. Emergency responders found the body of a second missing crew member about 10:45 a.m. that day.

The Texas General Land Office, which led the oil spill response, reported about 1,600 gallons of diesel fuel removed from the water, along with 680 gallons of a diesel fuel/water mix.

The incident was partially captured on a terminal camera, whose footage was shown at the NTSB board meeting. The dredge is just offscreen, to the right of the screen. The camera shakes when the initial pipeline breach happens; a couple of minutes later, the fireball erupts into the screen from the right.

The December 7 meeting was the first time the full NTSB had met to consider the reports of the various investigative teams that focused on different aspects of the incident.

Among the teams’ findings:

• Orion had no written procedures and policies for planning operations near pipelines specifically. Its safety meeting included general information about weather, personal protective equipment and other matters not specific to the site itself. It had no evacuation procedures in case of a pipeline emergency, which could have resulted in quicker reactions.

• The engineering plans that the terminal operator, Epic, submitted did not accurately show the proximity of the pipeline to the dredging area. These inaccurate plans were uploaded into dredging software that the operator who guided the cutterhead, called a leverman, relied on.

• Correct information about the slope from the bank to the dredged area, which included the pipelines, wasn’t shaded or marked on the charts given to the Orion teams. Instead, the Dredgepack software calculated and generated its own slope using an algorithm.

• Although Orion included Epic in its planning meetings, it didn’t include anyone from Enterprise.

• Orion’s safety planning didn’t include immediate responses in case of a pipeline rupture, which include securing or shutting off all ignition sources. The Waymon L. Boyd investigation concluded that after the initial rupture, an aerosol of mixed propane gas and water engulfed the vessel and was drawn via vents into the engineroom, where it encountered an ignition source.

• Texas regulations governing distances and tolerance zones to pipelines were drawn up with land-based pipelines in mind and may not be fit for purpose in marine construction projects.

• Because the pipelines were deemed to be outside the dredging area, they were not marked with required markings, which would have included buoys and been placed every 20 feet. Instead, an Orion team member informally requested courtesy markings because he was concerned about anchor placement, not dredging. The courtesy markings, which were not required, consisted of cane poles and were only placed every 200 feet, were less visible, and in any case were not designed to guide dredge operators in avoiding pipelines.

According to the report, NTSB concluded that marine dredging projects require a greater level of collaboration and review between pipeline operators and dredging companies than the one-call process provides because of the challenges associated with marking marine pipelines and the lack of precision associated with dredging operations. In addition, third-party damage prevention efforts would be improved if dredging companies obtained accurate location data from pipeline operators for pipelines within and near dredging project boundaries to incorporate into dredge control software files.

The executive summary, probable cause, findings and safety recommendations are in the report abstract available on the investigation web page. The final report will be published on the NTSB website in several weeks.

The public docket for the investigation contains nearly 2,800 pages of factual information, including interview transcripts, photographs and other investigative materials.