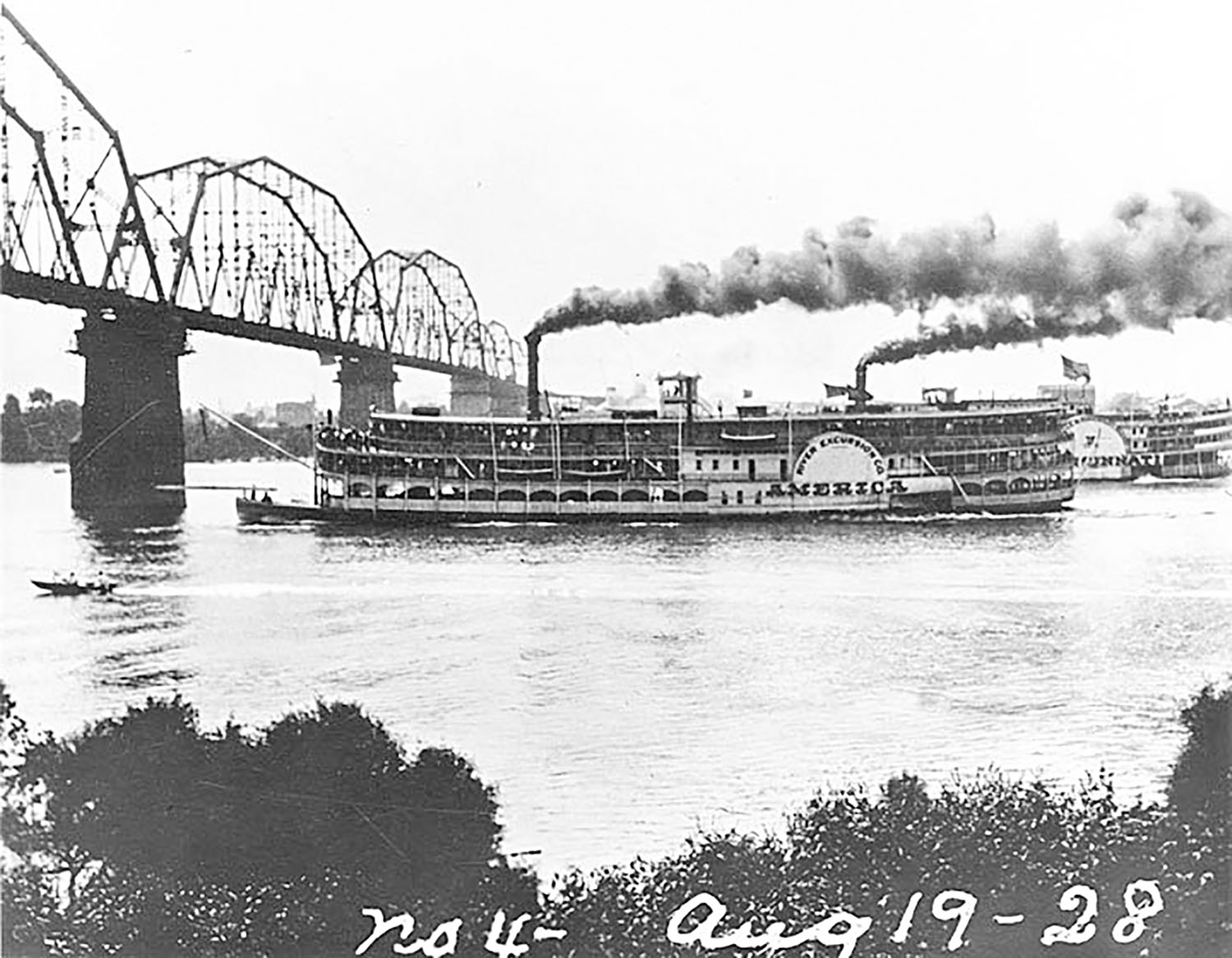 Another stellar product of the Howard Shipyard was the beautiful and large sidewheeler Indiana. Constructed on a wood hull measuring 285 feet in length by 45 feet in width, the boat operated for the Louisville & Cincinnati Packet Company carrying freight and passengers until the upper works were destroyed by fire at Cincinnati on May 1, 1916. The Howard yard salvaged the hull and engines (from the packet Bostona), and the rebuilt riverboat was renamed America. Also recycled in the extensive project were the whistle from the City of Louisville (crushed in the 1918 ice) and the roof bell from the Telegraph No. 3.

After running in packet trades, the staterooms were removed from the America to create space for a dance floor and to alter the vessel for use as an excursion boat. The vessel was allowed 3,000 passengers and based mainly at Louisville, although it was known to make tramping trips as far away as Pittsburgh and New Orleans.

A lighted sign placed between the boat’s smokestacks spelled “STR. AMERICA” in white light bulbs, and many locals called it the “Star America.” The main trade for the America was between the Louisville wharf and the Fern Grove Amusement Park some 14 miles upriver.

Fern Grove was acquired by David B.G. Rose, a Louisville businessman, in 1927, and the park was renamed Rose Island. A widely publicized steamboat race, the last ever run between sidewheelers, was held on August 19, 1928, when the America and Cincinnati steamed up through the Louisville harbor amidst huge clouds of sooty black smoke and with hundreds of passengers aboard.

The story goes that the America was the faster of the two steamers, but it was earlier decided that the Cincinnati would be the winner. The owner ordered chief engineer Henry McClanahan to slow the America down to allow the Cincinnati to win by a mere 30 feet. The crew mistakenly suspected that the engineer slowed the boat of his own volition to throw the race and snubbed him; not even passing the salt when he asked for it at the dining table. The elderly gentleman broke down in tears and confessed that at his advanced age he feared he could not find employment elsewhere if he did not obey orders. He was immediately forgiven, and the irate crew transferred their animosity to the management.

The engraved trophy cup awarded to Capt. James O’Brien, master of the Cincinnati, and a 7-foot framed mural photograph of the race are today displayed at the Howard Steamboat Museum.

The America operated until 1930, when the Great Depression greatly affected the boat’s passenger business. The steamboat was laid up at Port Fulton (Jeffersonville) above the Howard Shipyard after a disastrous financial season. Capt. Alan Bates related the story of the America’s fiery demise under mysterious circumstances. On the afternoon of September 8, 1930, a mate on the boat reportedly was visiting on the Louisville and Cincinnati wharfboat at the city waterfront. Looking upriver he suddenly exclaimed, “Look! The America is on fire!” It was another half hour before any smoke was seen.

For the 1931 season, the steamer Idlewild (today’s Belle of Louisville) assumed the duties as Louisville’s resident excursion boat. Several river historians recently deduced that the 32-whistle Nichol calliope on the America was likely salvaged from the burned boat and installed on the Idlewild.

Caption for photo: The America approaches the Big Four Railroad Bridge (now a pedway) at Louisville during the 1928 race with the Cincinnati, the last of the contests between sidewheelers. (Keith Norrington collection)