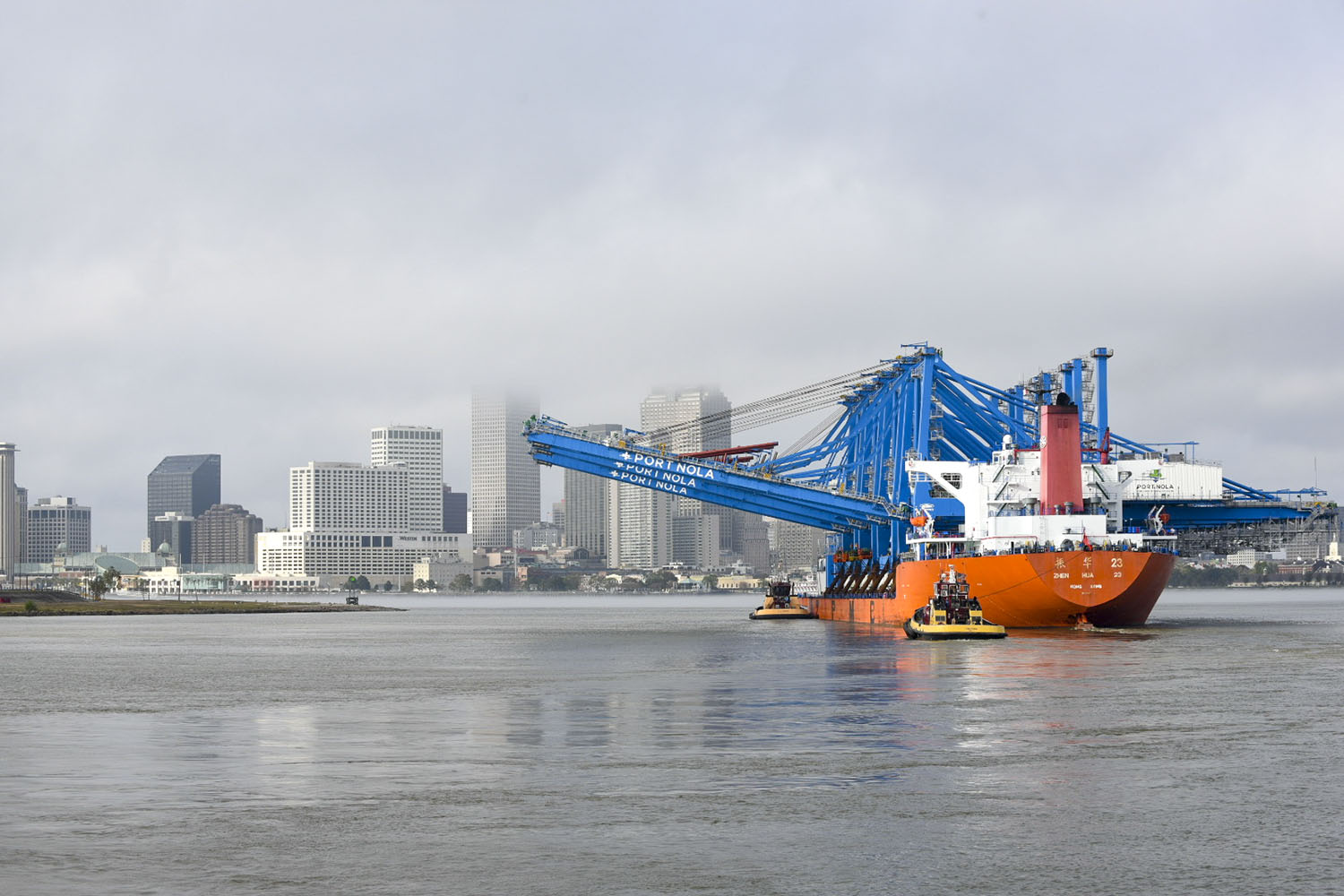 The $112 million investment, which included $49 million for the construction and delivery of the cranes and $63 million to modernize the wharf and extend the crane rail infrastructure, began in 2019 when the Port NOLA Board of Commissioners approved the project. The four new gantry cranes are essential to Port NOLA’s overall plan for the gateway, which includes optimizing facilities in New Orleans and building the Louisiana International Terminal, a new container terminal, in St. Bernard Parish.

“This is an exciting example of Louisiana investing in port infrastructure to support the nation’s supply chain of the future,” Edwards said. “It is a great day for the Port of New Orleans and the outstanding men and women who work on the Lower Mississippi River. Containerized cargo has more than doubled over the last decade at the Port of New Orleans, and this investment positions Louisiana to grow a major economic engine and job creator.”

Port NOLA President and CEO Brandy Christian applauded the governor and the Louisiana legislature for providing critical project funding, including $43 million from the Louisiana Department of Transportation and Development and the state’s capital outlay budget.  “I want to thank Governor Edwards and members of the legislature for supporting international trade in Louisiana,” Christian said. “This investment makes Port NOLA more competitive in the global trade-based economy and grows family-supporting maritime jobs here at home. The new cranes increase efficiency through the Louisiana gateway and help fuel our economy.”

“The successful delivery of the cranes would not have been possible without the support, cooperation and coordination of the entire maritime community,” Christian said. “The Crescent River Port Pilots, Associated Branch Pilots and the U.S. Coast Guard coordinated safe passage on the river and ensured transit went safely and smoothly.”

Shanghai Zhenhua Heavy Industries Company LTD manufactured and delivered the cranes to the Napoleon Avenue Container Terminal on December 9 via the mv. Shanghai Zhen Hua 23. The 1,600-ton cranes are fully electric, with zero diesel emissions, and can reach containerized cargo stacked 20 containers across a ship.

“Louisiana’s natural multimodal environment is our greatest asset, the core of which is the Mississippi River.” said Louisiana Department of Transportation and Development Secretary Shawn Wilson. “These cranes are evidence to the world that our state and DOTD, in partnership with the Port of New Orleans, remains committed to multimodal infrastructure, global goods movement and doing our part to ensure supply chain stability.”

The four new cranes, and the crane rail extension project, make up  the first of three project phases to expand the Napoleon Avenue Container Terminal. Phase 2, called the Priority Enhancements Project, is a $10.23 million investment scheduled for completion by the end of 2022. The third phase is the Terminal Complex Modernization Program and invests another $21.5 million into the terminal. The projects include adding 200 electrified plugs to handle additional refrigerated container cargo, a new empty container gate complex and the reconstruction and strengthening of 15 acres of heavy-duty concrete paving to expand loaded container storage capacity, among other items. The multi-year project investments total an estimated $143.73 million.

According to a 2019 study by the LSU Economics & Policy Research Group and JLL Ports, Airports and Global Infrastructure, Port NOLA creates and supports more than 119,500 jobs and $29.8 billion of economic output nationwide. In Louisiana, Port NOLA generates 21,700 jobs and $4.3 billion in economic output.