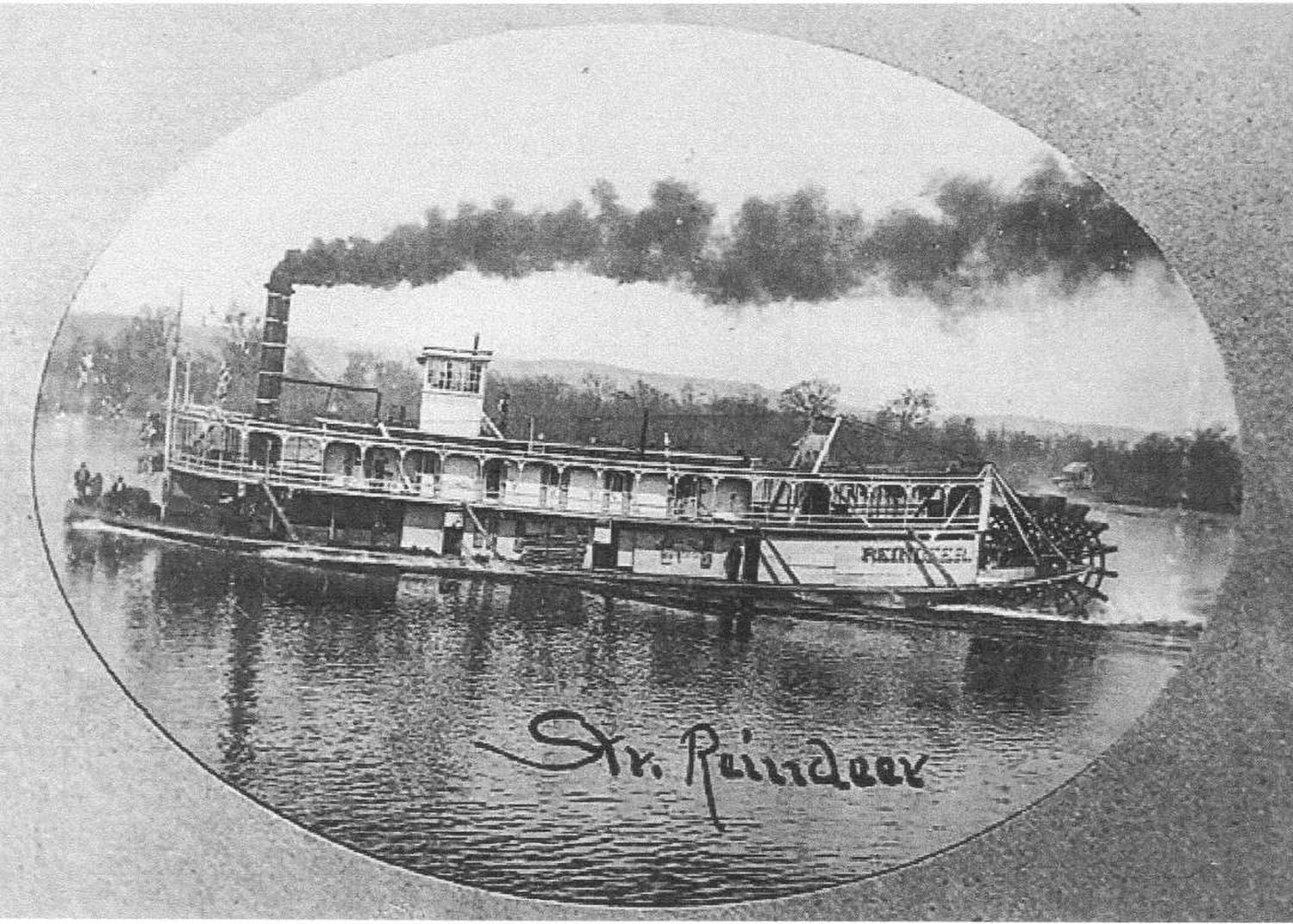 As most of the world celebrates the glory of Christmas and the coming of the new year this week, the Old Boat Column focuses upon several steamboat names with a connection to the yuletide season.

The earliest steamer christened Reindeer was built at my hometown of New Albany, Ind., in 1851. A wooden-hulled sidewheel packet that ran in the Louisville-New Orleans trade, the vessel set a record in 1853 when it made the trip up the Mississippi and Ohio rivers in four days, 19 hours and 45 minutes.

The boat was sold to new owners in 1854 and, en route to St. Louis, collapsed a boiler flue at Cannelton, Ind, with a loss of 38 lives. The steamboat Europa assisted in landing the Reindeer. On the following morning the Magnolia towed the wreck to Hawesville, Ky., where the victims were interred with a mass burial ceremony. A monument was erected at the site.

The Reindeer was rebuilt and operated out of St. Louis until it was snagged on November 12, 1857 at Wood River, Ill., a total loss.

The St. Nicholas was a sidewheel packet, built on a wooden hull measuring 223.3 feet in length, 33.8 feet in width and having a depth of 3.7 feet. Launched at the Ford yard in New Albany on June 8, 1864, the big steamer was owned by the Cincinnati-New Orleans Packet Company, of which David Gibson was the majority owner. Seven boilers provided the steam for engines having 22-inch cylinders with a 7-foot stroke.

The riverboat made a number of trips above Cincinnati in early 1866 with Capt. Enos Moore as master. The boat ran in the New Orleans-Bayou Sara trade for a time before operating between New Orleans and the Red River. On December 23, 1868, the St. Nicholas sank in front of the town of Natchitoches, La., remaining upright throughout the winter. In May of 1869, spring flooding tore off the cabin, texas deck and pilothouse.

Capt. John Dowty, who had been the master of the St. Nicholas at the time of the sinking, chartered the Stonewall (built by the Howard Shipyard in 1866) to run in place of the sunken steamboat. He lost his life on October 27, 1869, when the Stonewall was nearly destroyed by fire at Neely’s Landing, near Cairo, Ill.

Another riverboat named Reindeer was a packet, constructed at Dubuque, Iowa in 1888. Built on a wooden hull that measured 125 feet in length and having a width of 23 feet, the sternwheeler operated on the Upper Mississippi River in the Dubuque-Clinton tri-weekly trade, with Capt. W.M. Moore as master. The boat struck a snag in Coon Slough during the summer of 1894; it was believed to be wreckage from the steamboat Lady Franklin and Nominee.

The Reindeer was rebuilt in 1901 at Quincy, Ill., and renamed Illinois. It was owned by the Illinois State Fish Commission until 1913, when the governor ordered the vessel detached on the grounds that certain politicians had abused the uses for which the steamboat was intended; it was then turned over to the Alton Division of the Naval Reserves. By 1925 the boat was owned by the New St. Louis & Calhoun Packet Company, which operated it both as a packet and towboat until sold to the Phillips brothers in 1929. On September 30, 1930, the steamboat burned in midstream at Alton, Ill. Rumors abounded that it had been used as a distillery (replete with a moonshine still aboard) and had been set adrift when federal officials were about to come aboard.

Caption for photo: The steamboat Reindeer.