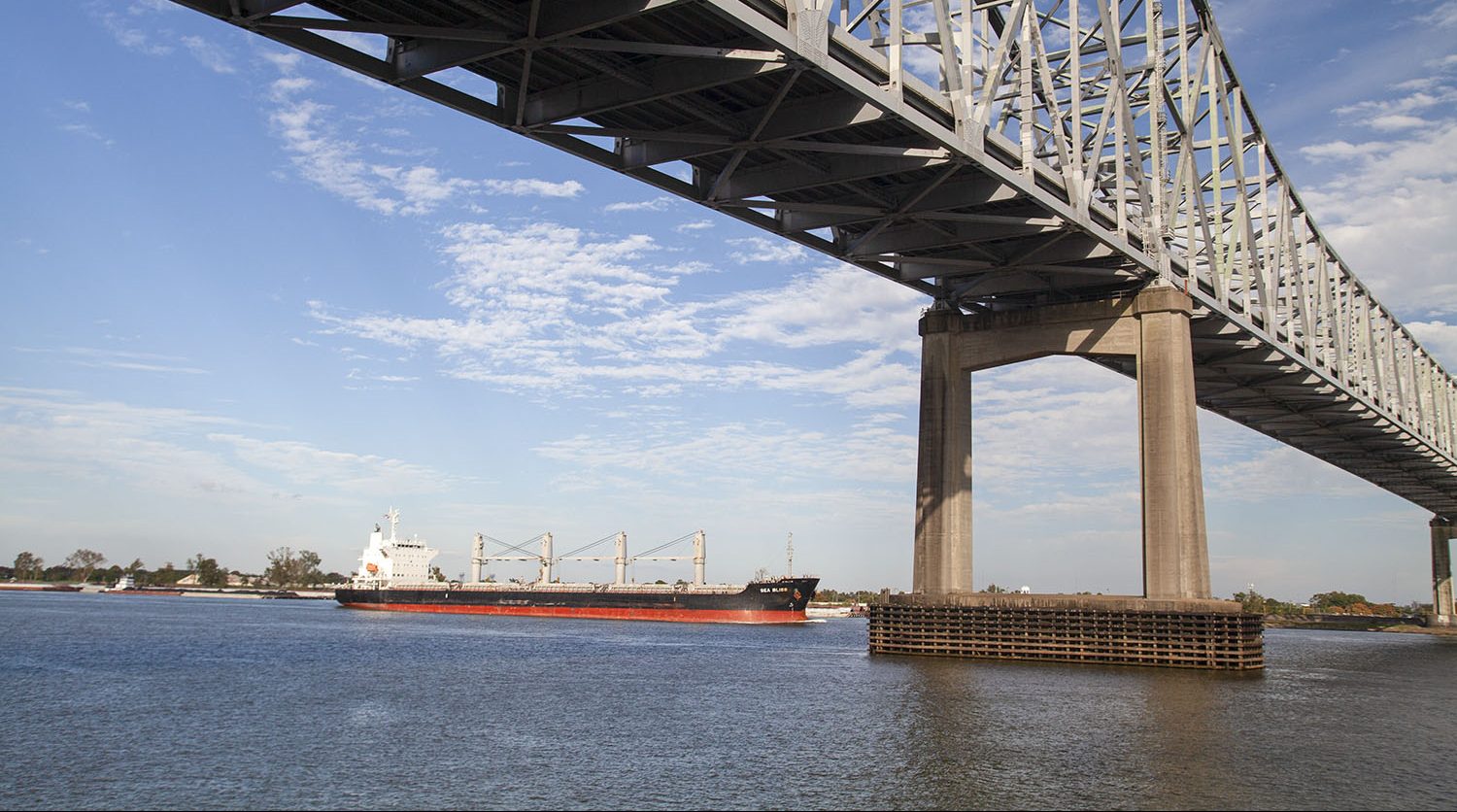 The years-long effort to deepen the Mississippi River Ship Channel (MRSC) from 47 feet to 50 feet crossed a major milestone last month when the Crescent River Port Pilots Association (CRPPA), which guides ships from Pilottown at Head of Passes up to New Orleans, increased its maximum draft recommendation from 47 feet to 48 feet. Three days earlier, on December 17, 2021, the Associated Branch Pilots of the Port of New Orleans (or Bar Pilots) upped its maximum draft recommendation to 49 feet. The Bar Pilots guide vessels between Head of Passes, or Mile 0, and the Gulf of Mexico.

It’s the first time the “controlling draft” on the river has been increased since it was deepened to 47 feet in the late 1980s and early 1990s.

“The newly-established controlling maximum freshwater draft of 48 feet is a key victory to the nationally-significant project to mechanically deepen the Mississippi River Ship Channel,” Sean Duffy, executive director of the Big River Coalition, wrote to stakeholders last month. “The targeted goal of this project is to deepen the MRSC to 50 feet from Mile 233.8 Above Head of Passes (AHP) in Baton Rouge to Mile 22 Below Head of Passes (BHP).

This month, the first vessel with a draft of 48 feet exited the MRSC, marking yet another milestone in the march toward a 50-foot draft on the river.

So why hasn’t the draft been lowered all the way to 50 feet from Mile 175 to the Gulf? Duffy said it has to do with what he calls “invisible infrastructure,” namely a pair of pipelines around Mile 158 and two others near Venice.

“Although the first 195 statute miles of the ship channel have already been deepened beyond 50 feet, pipelines in these areas have not been surveyed to certify their depth below the river bottom,” Duffy said. “Channel surveys show how many feet of water are above the river bottom, but finding the depth of pipelines below the bottom is also critical.”

Duffy said Corps officials are working with industry and pilot associations to thoroughly survey those pipelines and determine whether their depth below the river bottom supports a 50-foot draft.

“It’s definitely a possibility [that the pipelines are already deep enough below the river bottom] because there appears to be more than 50 feet of water above them,” Duffy said. “My belief is, we could be at 48 or 49 feet up to Mile 175 pretty quickly.”

All three pilot associations are taking the approach of increasing the maximum draft in one-foot increments.

“The pilots are actively reviewing all data, including channel surveys, because decisions to advance a 50-foot channel are a top priority,” Duffy said.

Besides pipelines crossing the river, Duffy also hopes to bring attention to other kinds of “invisible infrastructure,” like sensors indicating the air gap under bridges and current monitors. It’s all part of making the Mississippi River Ship Channel not just deep enough to accommodate modern ships, but reliable and resilient enough to drive the nation’s economy.

In an email to stakeholders this week, Mike Steenhoek, executive director of the Soy Transportation Coalition (STC), praised the recent developments on the Lower Mississippi River en route to a 50-foot draft. Deepening the river to 50 feet isn’t just a positive for Louisiana, Steenhoek said. It benefits farmers throughout the nation’s heartland. The STC studied the impact a 50-foot channel on the Mississippi River would have for soybean growers, and the results were impressive.

“The STC research estimates farmers in the 31 evaluated states will annually receive an additional $461 million for their soybeans due to dredging the Lower Mississippi River to 50 feet,” Steenhoek said. “While those states located in close proximity to the inland waterway system will realize the most benefit, states further removed will also benefit from the increased modal competition between rail and barge. When modal competition increases, a downward pressure on shipping rates will often occur.

“With barge transportation becoming more viable for a larger percentage of the soybean-producing areas of the country, there will be a great degree of overlap between areas served by railroads and barge,” he added. “Soybean shippers will benefit from this modal competition.”

A deeper river channel means ships can load more cargo, and the benefits of those economies of scale reach all the way upriver.

Duffy said the effort to realize a 50-foot channel on the Mississippi River stretches all the way back to 2012 when he spoke to the board of the Big River Coalition and proposed the deepening project. At that time, the board asked Duffy to develop a game plan and identify necessary steps. He listed three priorities for achieving a 50-foot channel: increase the channel maintenance threshold to 50 feet, have the Corps and the non-federal sponsor for the project conduct a General Re-evaluation Report to update the economic benefits and secure funding and complete the necessary dredging. The Water Resources and Reform Development Act of 2014 accomplished the first task, and the General Re-evaluation Report was completed in August 2018. WRDA 2016 then helped make the third task easier for the non-federal sponsor, the Louisiana Department of Transportation & Development, by adjusting the cost-share from a 50-50 equal share to 75 percent from the federal government and 25 percent from the non-federal sponsor. Federal funding to deepen the Ship Channel came from a demonstration program contained in WRDA 2020.

Duffy said that, while the draft from Mile 175 to the Gulf will inch toward 50 feet in the nearer term, dredging the remaining crossings up to Baton Rouge will be complicated. Current estimates are for that to be completed by 2025.

Duffy said he and Steenhoek often praise each other’s “supportive efforts on promoting the synergies between the Big River Coalition and the Soy Transportation Coalition,” specifically as it relates to the deepening project and efforts to maintain the Ship Channel.

“Waterways management is a team sport,” said Duffy, who called the STC “a dedicated teammate.”