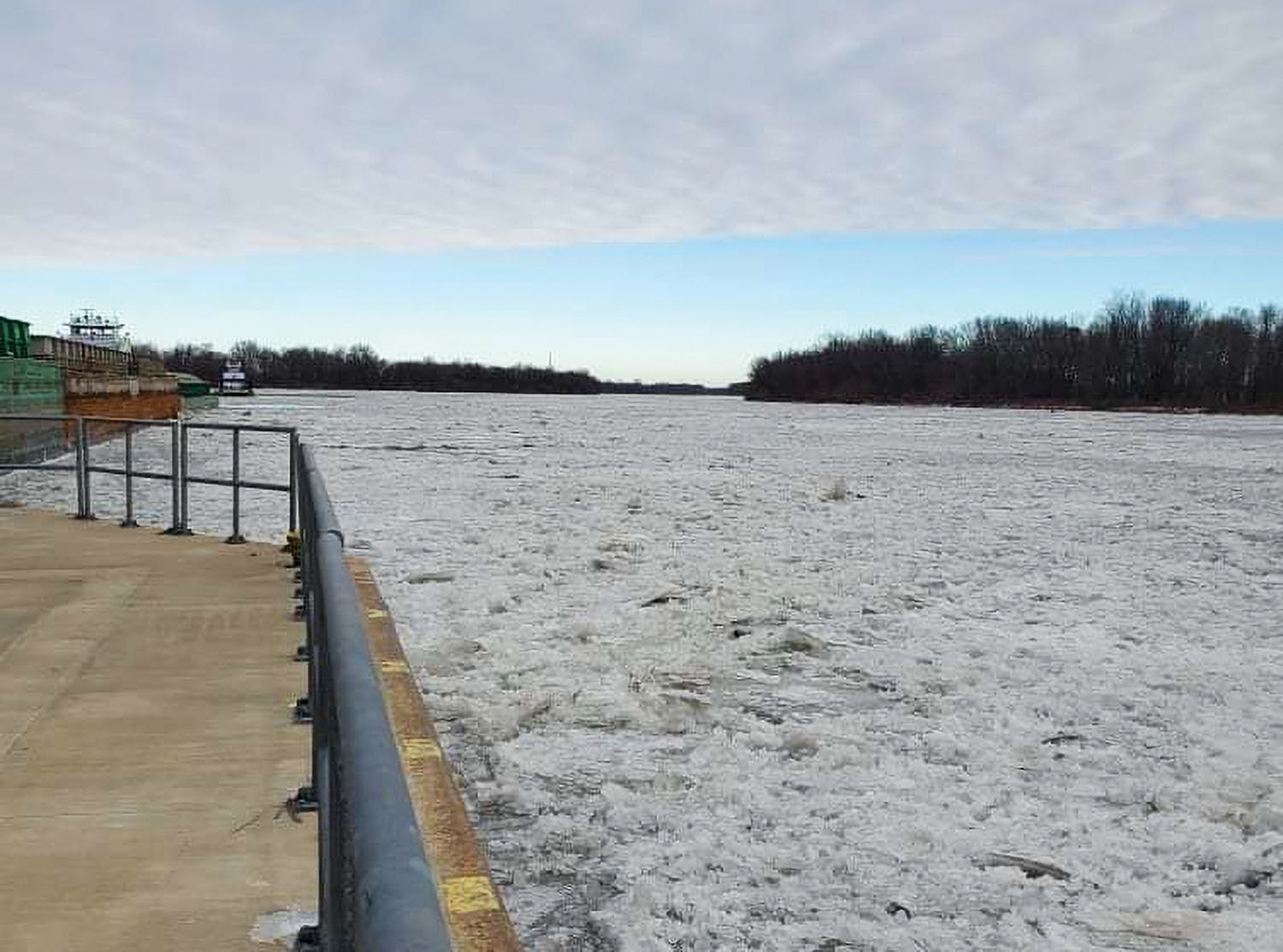 Winter weather issues, including icing on the Illinois River and low water on the Middle Mississippi between St. Louis, Mo., and Cairo, Ill., are causing headaches for the navigation industry and the Corps of Engineers.

At one point January 12, about 25 boats were waiting to lock through the LaGrange Lock, Mile 80.2 on the Illinois River. On January 9, locking was paused for 5-1/2 hours while a lock crew conducted operations to mitigate ice stacking on the dam.

Chris Trefry, chief of water control at the Rock Island Engineer District, said the lock was closed after the supervisor at LaGrange Lock and Dam observed multiple wickets on the dam in a semi-breach position due to heavy ice flows stacking up on them to heights of 4 to 5 feet above the water line.

Tows upriver verified that an ice jam had broken loose that was holding back water 5 miles upstream, sending increased flows and ice toward the wickets, according to a Corps report.

The supervisor ceased locking about 10:30 a.m. to assemble the crew to focus on getting the fleet out to address the wickets and try and avoid the wickets becoming fully breached, possibly losing the dam when the ice and flows arrived. They were successful in relieving the wickets with ice and standing them upright and proceeded to raise seven more wickets on the far side of the dam. Locking resumed at 4:30 p.m.

In an attempt to keep the ice jam from reforming, the Corps allowed locking of one tow southbound and three northbound.

Scott Uhl, operations manager of the Illinois Waterway for the Rock Island Engineer District, said ice is an issue with the waterway every year but that this season, particularly, ice formed rapidly at the same time the region experienced higher than normal flow, creating ice jams both at and upstream of LaGrange Lock and Dam.

“Above LaGrange Lock and Dam is a narrow area that is creating one of our ice dams,” he said. “This ice dam keeps sending ice down onto LaGrange each time a tow passes through it.  Most of the ice can be sent through the dam to continue on downstream, but a large amount of ice still ends up in the lock chamber.  When this happens, we perform an ice lockage.  We have to lock the ice down just as we would a vessel.  This can be very time consuming, and at times multiple ice lockages may be required to take place before a vessel can enter the lock chamber.”

Warmer weather in the forecast could help, but that is not guaranteed.

“We are looking at a slight warming trend over the next several days, so that could help the situation by melting ice, but it could also hinder things as it may cause more ice to flow downstream and into the lock and dam,” Uhl said. “The staff at each lock and dam are monitoring the conditions at their respective sites constantly during the ice season and reacting accordingly as conditions change.”

Uhl warned, “Currently a two-to-three-day delay seems to be what is happening, but that could increase to a week or more if ice conditions do not improve.”

Trefry said he wasn’t sure in looking at the forecast that it was likely to warm up enough for conditions to improve yet.

“These ice conditions will probably persist, on and off, through February in a typical year,” he said.

The icing also makes it more problematic for a tow to make its coupling when making a double lockage, Uhl said.

“Ice will get in between the couplings and need to be pushed out of the way by the deck crew in order to remake the coupling,” he said. “Next, ice can build up on the walls of the lock chamber.  Once this ice shelf gets thick enough, a lock will require a 70-foot width restriction because a normal 105-foot tow won’t fit into the lock chamber.  Finally, it can cause ice dams at narrow parts of the channel.  These ice dams can be difficult for tows to push through and, occasionally, when they do, it will break up the ice dam and send a bunch of ice and pooled water down on a lock and dam.”

Tows were requiring ice couplings–when the barges at the coupling are all rake-end barges–to give the ice some space to fit between the barges, making it much easier to remake the coupling.

Uhl noted the Illinois Waterway is in a unique situation in the winter.

“The Illinois Waterway is unique in the fact that most of the Upper Mississippi River system shuts down navigation for the winter and ices in,” he said. “The ILWW does not shut down, and it takes a tremendous effort from the staff at the locks and dams to keep traffic moving. It is the hard work and dedication of the team on the Illinois Waterway that enables navigation to continue throughout the ice season.”

Looking ahead to the summer, Uhl also pointed out that traffic will be restricted at Brandon Road Lock, Mile 286, later this year.

Upper bulkhead recesses are being reconstructed, and in order for the contractor to construct these recesses, a 70-foot width restriction along with the ability to only pass traffic during the overnight hours will take place from May 9 to August 14.

A full closure at Brandon Road Lock will then take place from August 15 through September 4 before the lock reopens, but some restrictions will remain in place from September 5 to September 8.

Russell Errett, hydrologic engineer in the St. Louis Engineer District’s water management office, noted that the winter months bring about some of the lowest flows traditionally in the St. Louis region as there is low flow support from the Missouri and less flow from the Upper Mississippi due to icing.

On January 12, the gauge at St. Louis read zero. It is normally about 6 feet higher, Errett said, consulting hydrographic data.

The river had gotten as low as negative 2 in St. Louis the weekend before.

“If we don’t get any additional rain in the next two weeks, we’re going to be approaching the negative 2 reading,” Errett said.

Such river stages are not entirely uncommon.

“Once every few years we’ll see a negative stage in the winter months,” he said.

In response, towboat crews reduced their southbound drafts to 10 feet from St. Louis to Cairo and 9 –feet,6 inches northbound all the way from New Orleans to St. Louis. The restrictions were expected to remain in place through late January.

The Corps begins planning in July for the dredging season and maintains the channel to negative 3 in St. Louis, which means a minimum channel depth of 9 feet and a minimum channel width of 300 in straight portions of the river, but wider in bends. So, at negative 2 feet on the gauge, the river is at least 10 feet deep in the channel.

Errett said there were some concerns that within a month the gauge in St. Louis could reach the negative 3 stage, but that is not a surprise given the drought conditions upriver on both the Upper Mississippi and the Missouri.

“I really thought we’d be much lower than we are by now,” he said.