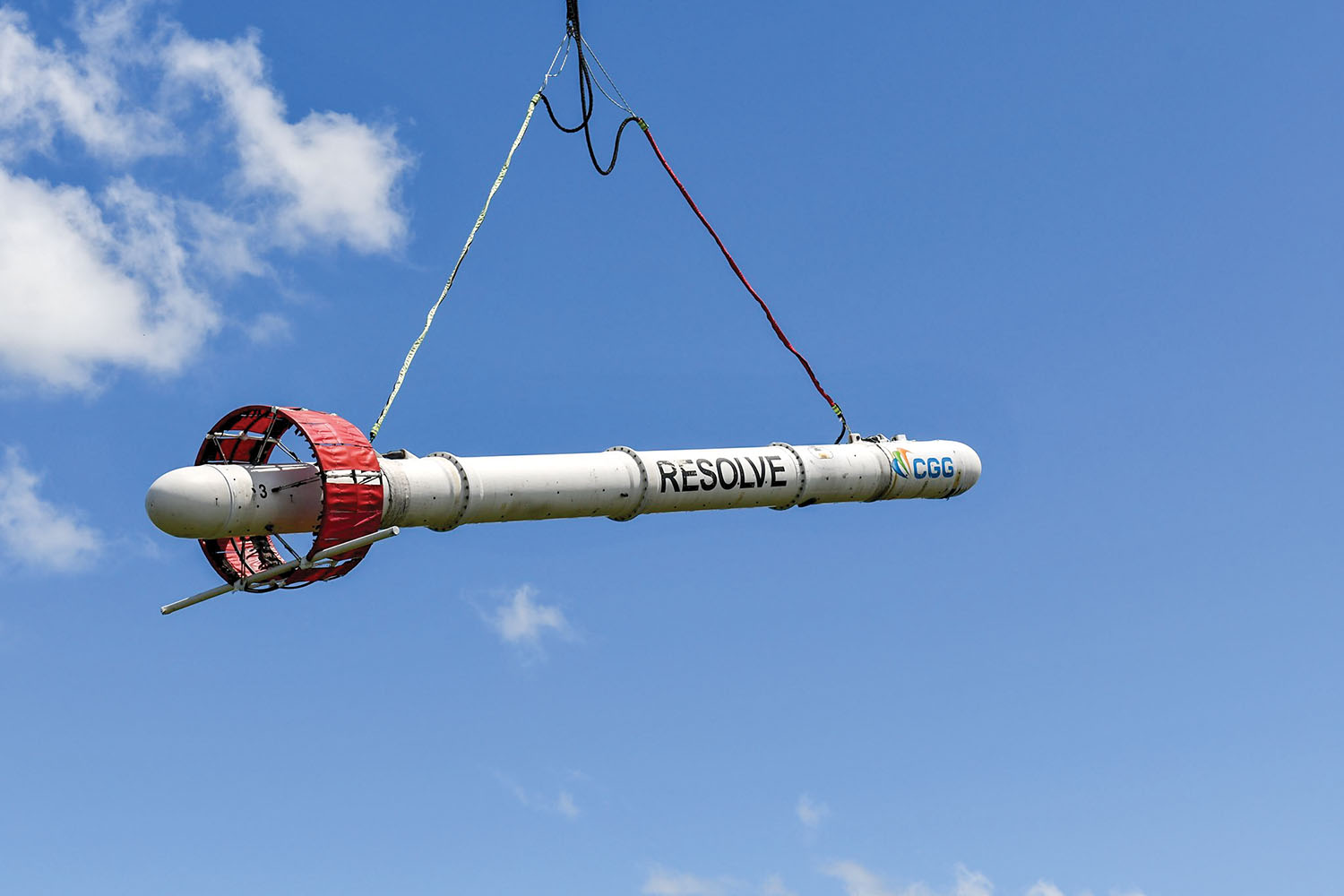 Last summer, people living along the Mississippi River from its confluence with the Ohio all the way down to Baton Rouge, La., might have seen a strange sight: a helicopter with a giant red-tailed dart tethered beneath, flying along the river levee.

No, it wasn’t a mirage or performance art. Instead, it was an innovative tool the Vicksburg Engineer District and the U.S. Geological Survey (USGS) are using to scan and map beneath the surface of levees along the river. The dart, technically called a “frequency domain system,” is paving the way for a first-of-its-kind regional geophysical survey of the Mississippi River’s mainline levees. The device uses something akin to LiDAR technology to see the different soil layers down to about 150 feet below the surface.

“Borings show us the general lay of the land under the surface, but using this technology is like getting an MRI on your brain,” said Kent Parrish, project manager with the Vicksburg Engineer District. “It can tell me whether it senses silt, sand, clay or gravel and show me data between boring areas, like where the clay blanket might be too thin.”

Parrish said that data can help Corps crews prioritize efforts and even anticipate where seepage may occur. The clay blanket, for instance, under the land side of the levee is a seepage-fighting feature. During a flood, pressure from the river pushes water through the coarse soil beneath the levee and against the clay blanket. If the clay blanket is too thin, water will pass through to the land side, eventually undermining the levee itself.

Traditionally, the Vicksburg District has used geotechnical borings, spaced about every 500 feet, to get a “small snapshot” of the soil conditions. When levees experience seepage, Corps crews react by building berms along the affected areas.

Will McRae, a civil engineer with the Vicksburg District’s Levee Safety Center, said soil borings serve the district well, but they have their limitations.

“For the most part, soil conditions underground may not change much, but you never truly know what’s between different borings,” McRae said. “The idea behind the survey is to get a continuous look at the subsurface.”

USGS hired CGG, a Canadian geoscience technology company recently acquired by Xcalibur Multiphysics Group, to build the system, aptly named “Resolve.” The system featured an external battery, a transmitting section that tracks six frequencies between 400 hertz and 140,000 kilohertz, a bucking section to cancel out external interference (like noise from the helicopter), a magnetometer to record changes in the magnetic field and a receiver that records signals returning from the ground.

CGG contracted the single-engine Eurocopter AS350-B3 that carried the dart. In its cabin, the helicopter carried all the equipment to receive and record data from the surface, with the pilot or passenger able to monitor and modify settings mid-flight.

The entire effort stems from the Mississippi Alluvial Plain (MAP) Water Availability Study, which the USGS is conducting. The project, appropriated by Congress in 2017, hopes to achieve a better understanding of how agricultural activity has impacted groundwater resources in a 29,000-square-mile area around the Mississippi River.

USGS did a trial survey with Resolve early last year. The full survey between Sikeston, Mo., and Baton Rouge was conducted between May 2021 and August 2021.

The USGS team is processing the data from the flights now. Once that’s done, the team at the Corps’ Engineer Research and Development Center (ERDC) will analyze the data for any anomalies along the levees, like areas of thin clay blankets. The information will be a valuable resource for the Corps districts along the Mississippi River.