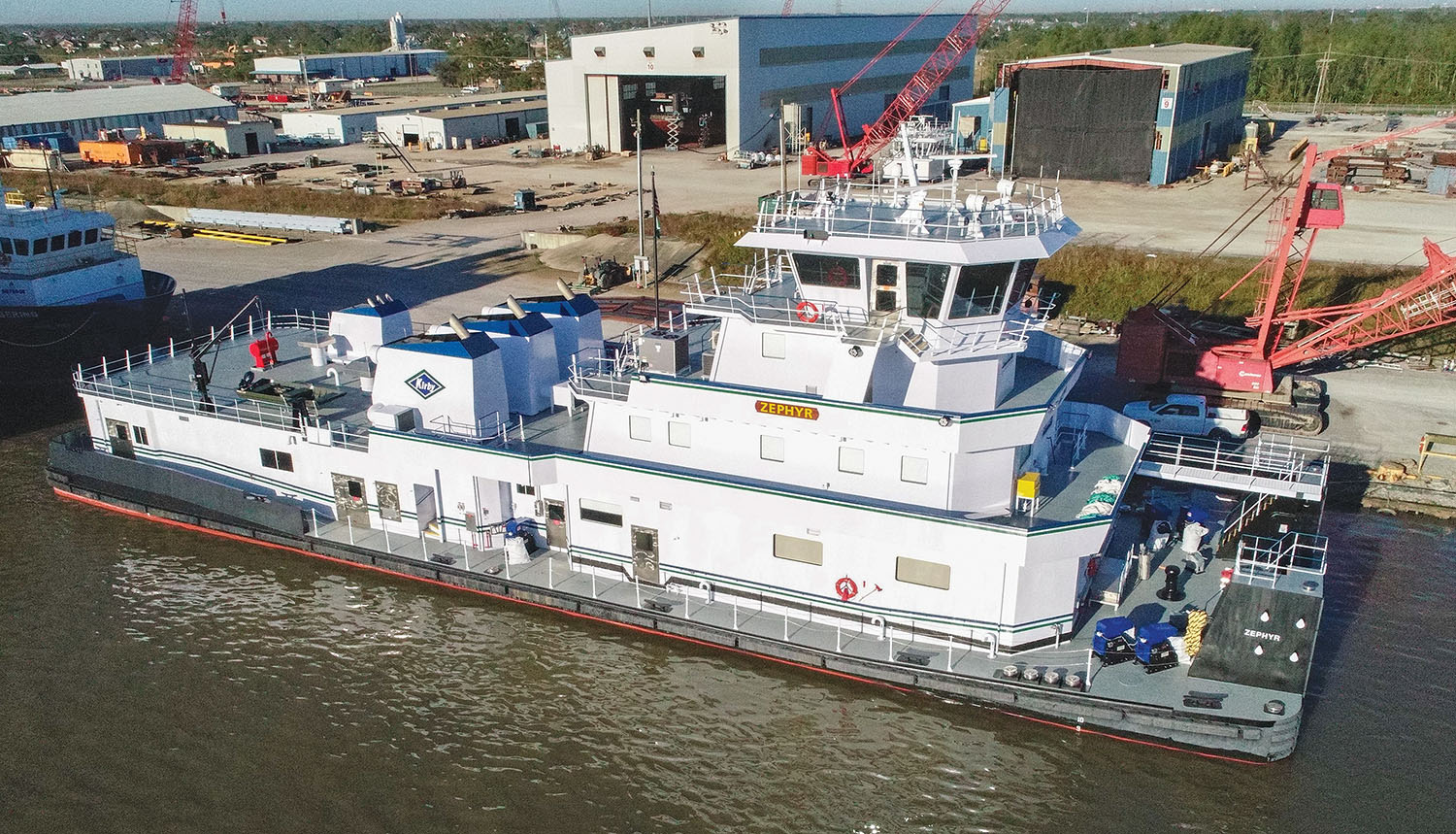 Belle Chasse, La.-based C&C Marine & Repair has delivered the mv. Zephyr, a 6,600 hp. triple screw towboat, to Kirby Inland Marine. The vessel, which Kirby will operate under a long-term lease from Hines Furlong Line, is the final boat in a three-boat series the shipyard built for Hines Furlong.

Like the mv. Scarlett Rose Furlong and the mv. Bowling Green, the first two boats in the series, the Zephyr measures 170 feet by 50 feet and offers a pilothouse eye level of 39 feet 3 inches. CT Marine of Portland, Maine, designed the Zephyr.

Ship service power comes from three Cummins QSM11-DM 275 kW generators, rather than the typical pair, for added redundancy. R.W. Fernstrum & Company supplied the Zephyr’s keel coolers, while Wheelhouse Electronics supplied its electronics and computer package. On deck, the Zephyr has a Schoellhorn-Albrecht capstan and Wintech deck winches. Fendering is by Schuyler, and the vessel’s fire detection system is from Herbert Hiller.

Inside, the mv. Zephyr offers accommodations for 11 crew members and one guest. The Zephyr’s superstructure is mounted on springs for enhanced vibration and sound reduction.

The first in the series, the mv. Scarlett Rose Furlong, was delivered in late 2020, and the second in the series, the mv. Bowling Green, was delivered to Kirby last summer. The mv. Zephyr came online roughly six months later, with Kirby departing C&C with the boat on December 4, 2021. While the vessels are built to operate on the upper and lower Mississippi River and the Ohio River, their design and propulsion package makes them excel on the lower river.

Furlong said that, in the year-plus the Scarlett Rose Furlong has been at work, the vessel has never had to come into the shipyard for repairs or fine tuning.

The mv. Zephyr is the second boat connected with the Hines Furlong Line family tree to bear that name. The original Zephyr, the mv. Hines Zephyr, was part of the James R. Hines Inc. fleet in the 1940s. Koppers Marine Ways in Paducah built the 99-foot sternwheel towboat in 1943. The Indiana Farm Bureau named it the mv. Ivan Harris until 1948, when James R. Hines Inc. bought and renamed it. At that time, James R. Hines Inc. sold fuel under the Zephyr brand, and the Hines Zephyr pushed petroleum products on the Green and Barren rivers in Kentucky.

Work wasn’t always easy pushing barges on those small Kentucky rivers, said Barry Griffith, who does graphics and photography for Hines Furlong Line and whose family connection with prior Hines companies goes back generations.

“Boats had to overcome or ‘chop’ their way through the tree slide-ins,” Griffith said. “The new Zephyr is a very fitting tribute to a little sternwheel towboat.”

According to the Inland River Record, Hines sold the original Zephyr to Kentucky River Colliers in 1956. The vessel still operated under the Hines Zephyr name until 1963 when it was sold to Blue Grass Barge, which changed the name to Keene. Later on, Paul Seekins bought the vessel and converted it to a pleasure boat named Norma G, according to the Inland River Record.

The Zephyr name wasn’t seen again on the river until 1967, when Sabine Transportation Company took delivery of a new vessel and gave it that name. That mv. Zephyr is a 75-foot, 2,400 hp. towboat built by Main Iron Works in Houma, La. Sabine operated it until 1998, when Kirby Inland Marine assumed ownership. Industry Terminal & Salvage bought that mv. Zephyr from Kirby just last year.

“We put it in operation right away as it is in fantastic shape,” said Brad Busatto, the new owner. “Kirby took great care of it. I don’t plan on renaming it as I love mythology, and I find the name inspirational.”

In Greek mythology, Zephyr was the god of the west wind.

Speaking on why he chose the name for the new Hines Furlong Line boat, Kent Furlong said, “Honestly, I just liked the name.” And with Kirby recently selling its older mv. Zephyr, it “worked out perfectly,” Furlong said.

Founded in 1997, C&C Marine & Repair designs and builds towboats, dredges, barges, offshore supply vessels and a variety of other marine vessels. The company also offers a full range of barge repair and paint services, including topside and hull repairs, ISE repairs, piping repairs and modifications, cargo tank repairs and modifications and barge blasting and painting. The company’s facilities are designed to perform all new construction under roof, with multiple projects under construction at the same time.

Hines Furlong Line, founded in 2004, owns a growing fleet of towboats and barges, which the company both operates and offers on long-term lease. Headquartered in Nashville, Tenn., with its vessel operations office in Paducah, Ky., Hines Furlong Line now has a fleet of 30 towboats (of which the company operates 22) and 70 tank barges, with a team of more than 350 employees.

Kirby Inland Marine operates the nation’s largest fleet of towboats and barges, which transport petrochemicals, refined products, black oil and agricultural chemicals along the Gulf Coast and on the Mississippi River and its tributaries. Kirby’s fleet includes 255 towing vessels and 1,025 inland tank barges.