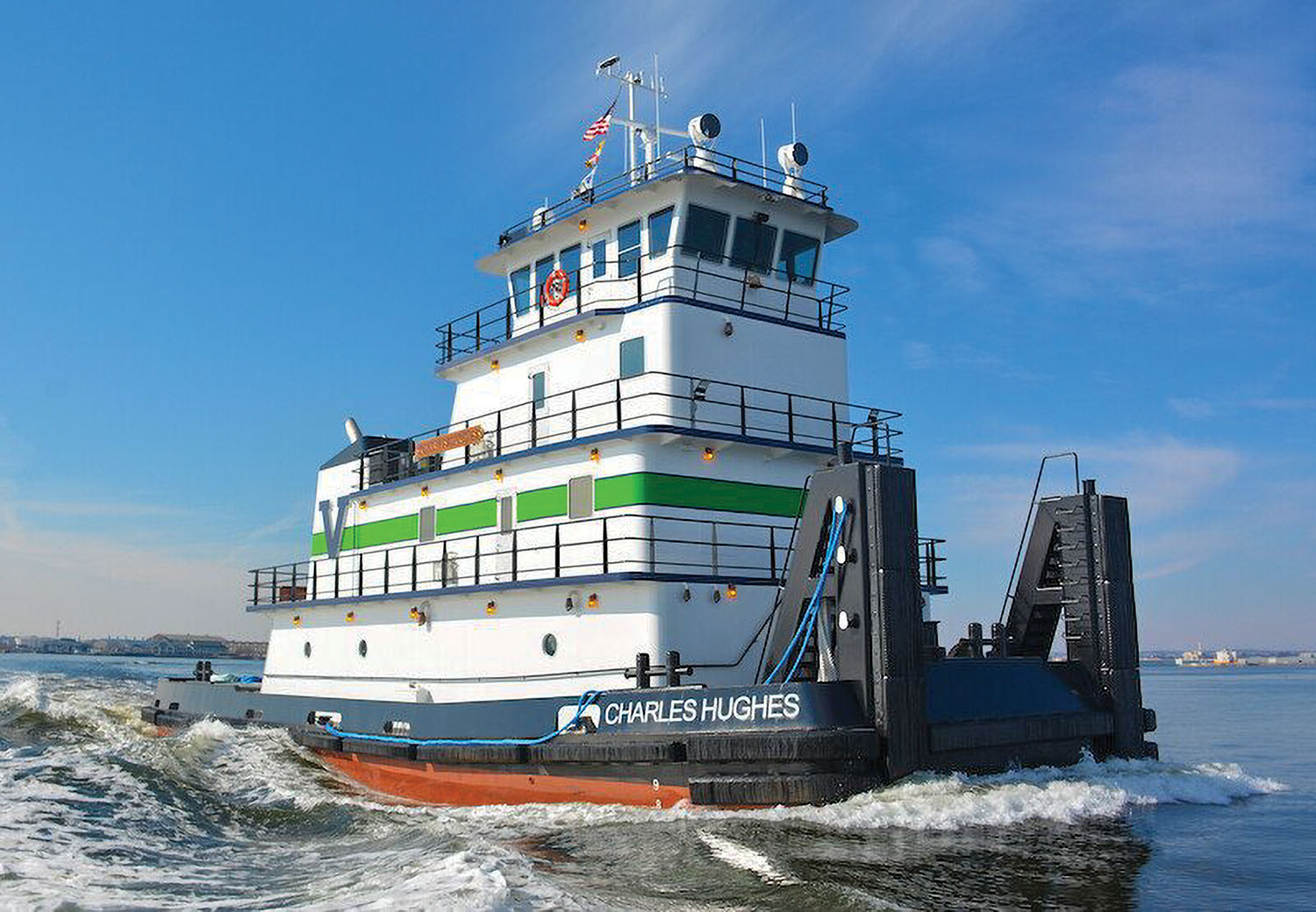 Designed and constructed by Chesapeake Shipbuilding, the shipbuilders and naval architects best known lately for a series of five river cruise boats it has built for American Cruise Lines, the Charles Hughes measures 94 by 34 by 10.5 feet with a draft of 8.5 feet.

The 3,000 hp. boat is equipped with Caterpillar 3512 main engines, conventional shafts, rudders and flanking rudders. The Cats each produce 1,500 hp. at 1,800 rpm. and are connected to stainless steel Hung Shen troost-style five-bladed propellers through Twin Disc MGX-5600 gears with 6:1 ratio. The propulsion package gives the vessel a running speed of 10.5 knots.

The boat features eight separate heating and air-conditioning systems that operate independently throughout the vessel. This enhances crew comfort in addition to augmenting fire-containment capability in case of emergency.

“Vane Brothers takes pride in providing our customers and crews with vessels constructed to the highest standards,” Vane Brothers President C. Duff Hughes said in a statement announcing the delivery. “The Charles Hughes is another powerful, peak-performing vessel that maximizes maneuverability where it is needed most.”

“Chesapeake has such a talented group of shipbuilders right in our back yard,” Demske said. “Each tug capitalizes on safety, comfort and productivity.” Along with the four towboats, Chesapeake Shipbuilding has supplied sixteen 3,000 hp., model-bow tugs.

The mv. Charles Hughes is named in honor of the late Charles F. Hughes, former Vane Brothers chairman of the board and the father of Vane’s current president, C. Duff Hughes. Hughes was a U.S. Navy veteran, Johns Hopkins University graduate and Vane Brothers executive from 1951 to 2004.

A previous boat Charles Hughes, built in 1975 and rated at 1,800-hp., was acquired by Vane Brothers in 1991 and sold in 2019. The classic-looking name boards from the first Charles Hughes were refinished and are now proudly mounted on the new Charles Hughes.