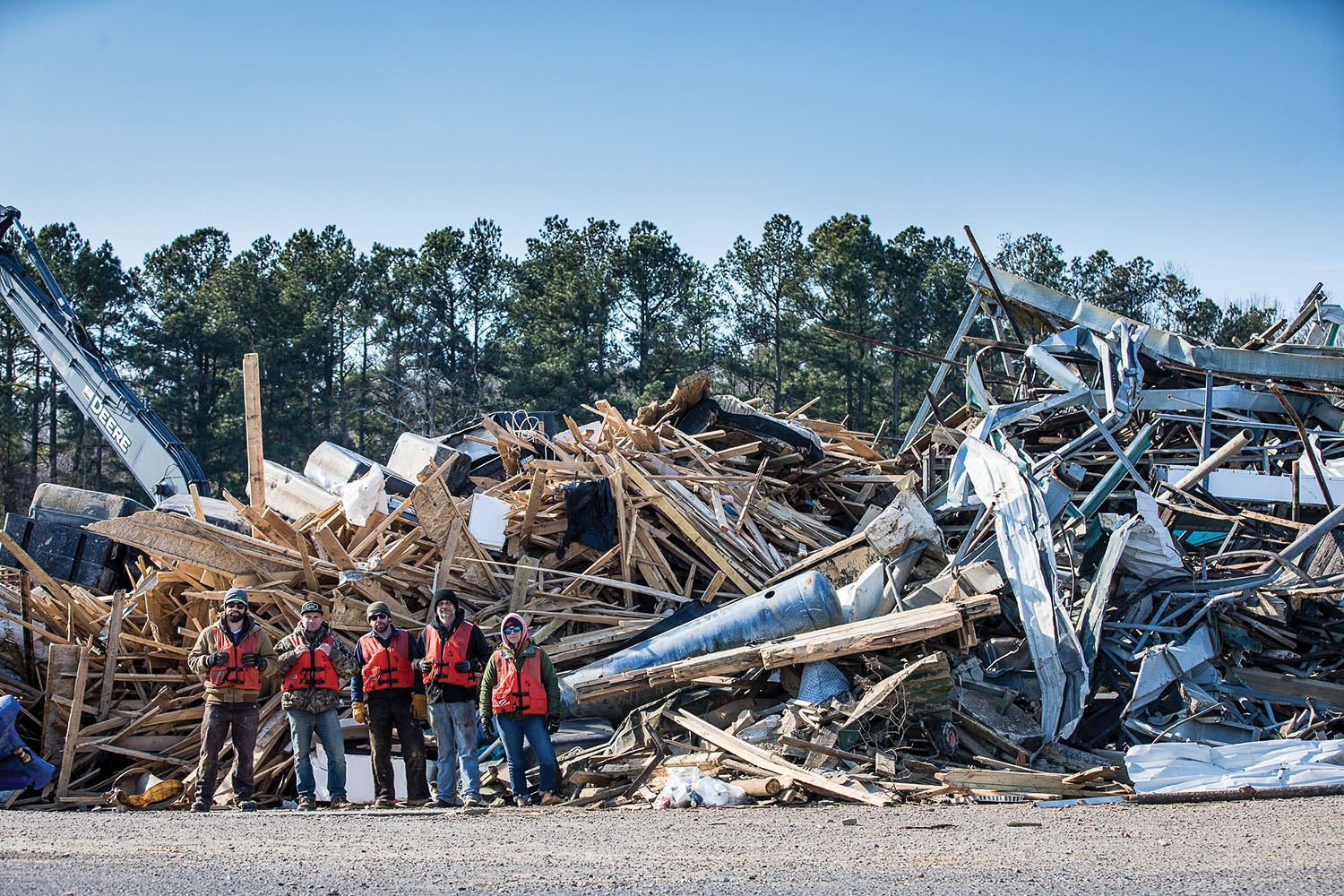 “This is 1.2 million pounds we’ve done so far, and that’s basically in eight weeks,” founder and president Chad Pregracke said of the debris the organization has pulled out of and alongside Kentucky Lake since a tornado hit December 10.

“This thing was so powerful it threw a decent portion of the houses into the lake, and also it picked up cars and threw them off the hills and into the lake,” Pregracke said.

Looking around at the devastation, Pregracke said it looked like a bomb had gone off. The damage it caused to the surrounding watershed was more than Pregracke had seen in any one location than in years of responding to hurricanes, he said.

“We came there with no plan,” he said. “We just knew we needed to get to work, and we needed to do it immediately.”

Living Lands & Waters usually has a quiet winter season, completing maintenance and repairs and preparing for the next season. The organization had just moved its equipment to Wepfer Marine in Memphis, Tenn., on December 10, with help from Marquette Transportation.

“And then the tornado happened, and we literally picked part of that equipment back up the next day,” Pregracke said.

It was Christmas Eve before Living Lands & Waters got all of its equipment unloaded and transported to Kentucky Lake. The volunteer crew didn’t stop for Christmas or New Year’s. “And we’ve been there every day since. But we’ve made a lot of progress,” Pregracke said. He wanted to give special thanks to his crew and to others working with him during what is usually a slow period for their willingness to step up their efforts to unprecedented levels.

The first job was to clear the navigational channel, making it safe for passing boat traffic, whether that be navigational traffic or recreational boaters. Pregracke said they spent the first seven or eight days picking sunken boats, cars and large pieces of debris out of the lake.

Then they turned their attention to the 5-mile-long line of debris on the shoreline, much of it on the east side of the lake, on the shoreline of the Land Between the Lakes National Recreation Area, a peninsula of land between Kentucky Lake and Lake Barkley in western Kentucky and northwest Tennessee that is set aside for outdoor recreation, including camping, picnicking, hiking, boating, wildlife viewing and water sports.

Now the group of up to 10 Living Lands & Waters crew members, supplemented by occasional out-of-town volunteers, has begun removing mangled docks and other structures inaccessible by land from the west shoreline of the lake.

“It’s going to take months to clean it up,” Pregracke said.

The Tennessee Valley Authority has provided some funding for the cleanup efforts, along with the West Kentucky Community Foundation and an anonymous, towboat industry-related donor, allowing Living Lands & Waters to be paid back for its expenses. Wepfer Marine has provided fuel, and Marquette Transportation moved the equipment. Ingram Marine Company is among the industry groups providing volunteers.

All of the funding and cooperative agreements have come together as the need has arisen.

“When I went there, there was no plan for that,” Pregracke said. “There was no time.”

Local governments have also provided some in-kind services, such as tractor-trailers to haul off collected debris.

The crews use three or four 30-foot boats to collect the debris. An excavator with a long reach and a grapple on a barge with a shallow-draft towboat grab the piles of collected refuse and sort them onto piles on the barge, which is taken to Rocky Point Park and placed in bigger piles awaiting final disposition.

Pregracke says he worries about getting the job done quickly, both because debris will begin floating downstream as the lake level rises in the spring and because as the water and air temperature rise, more people will be boating, skiing and playing on the water.

“It’s the most dangerous debris we’ve ever picked up,” he said. “There isn’t one board out there that isn’t full of nails and screws that just got ripped apart, and most of them are just floating.”

Pregracke said his crew expects to stay in place on the shores of Kentucky Lake until at least sometime in April.

“My goal is to try to make it look like, at least debris-wise, a tornado never even happened,” he said.

Caption for top photo (Click on image for full picture): Volunteers from Living Lands & Waters stand in front of a pile of debris cleaned from Kentucky Lake. (Photo by Joel Quimby)