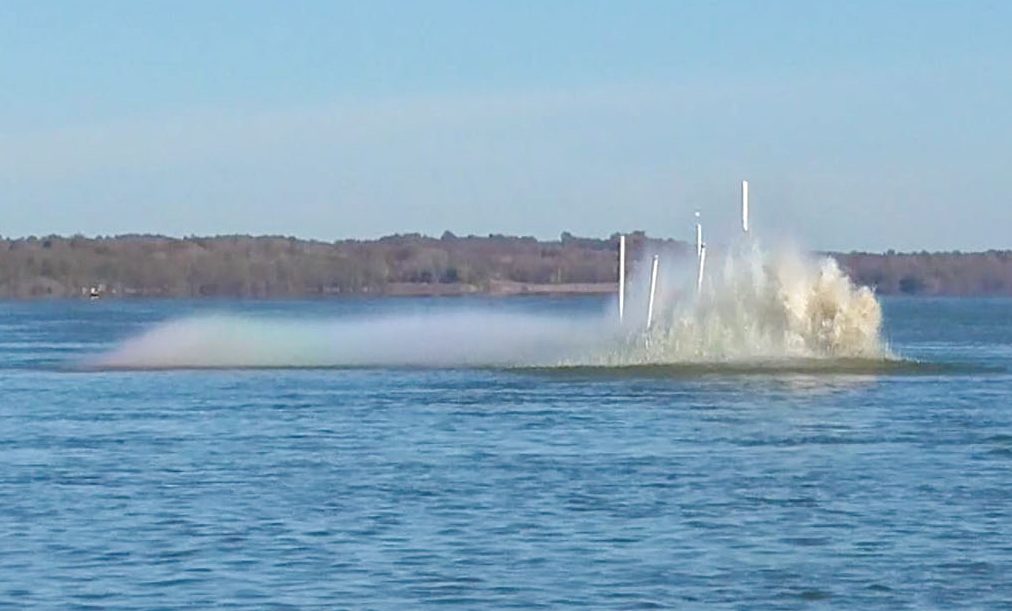 Demolition at the former Ohio River locks and dams 52 and 53 in southern Illinois is expected to be complete by the end of the year.

While landside demolition was finished in 2021, work on the structures in the river is taking longer, said Dewey Rissler, project manager with the Louisville Engineer District.

Demolition at 52 is farther along than at 53 as the contract was let earlier.

“There is still some excavation that needs to be done to lower portions of the river bottom where the dam was to get down to the elevation that we seek,” said Bill Hunter, project engineer. “There is some concrete and the like that is difficult to get to. It’s underwater, and it’s hard for the contractor to see what they’re doing and measure what they’re doing, so there is a little bit of that left to do.”

Concrete rubble excavated from the river will be moved to the Illinois shore and placed against the remains of the old landside lock wall before it is rocked over with riprap, he said. He anticipates the work will be completed this summer.

At 53, one wall of the 1,200-foot lock chamber, which is composed of sheet pile cells, must still be removed.

The Corps believed a previous contractor had either completed demolition on a portion of the project or not begun it yet, but instead some structures were partially demolished, Hunter said. That creates a need for extra precautions by the current contractor to safely drill holes, place explosives and complete demolition, he said.

Engineers must keep divers’ safety in mind, as well as the overall cost of demolition and the time it will take.

“We’re stepping back and looking at it closely to find the best way forward,” Hunter said. “We’re hoping we can get this done by the end of what we call the low-water season this year, so that would be late November or December. That’s our goal, but we’ve got to do it safely, and we have to work with our contractor to reach those goals.”

Additionally, Hunter said, some concrete from the 600-foot chamber also remains to be removed. That chamber also turned out to have been partially demolished, he said.

While divers can tell the structure has been altered, river conditions have made it difficult to assess exactly how much demolition has been done and where, which is necessary to determine what to do next.

He added, “You have to send a diver down there, and at times they can barely see their hand in front of their face.”

Work already completed at the 53 site has included removing the bear traps on the Kentucky side, the piers and a good deal of the fixed weir, Hunter said. “So good progress has been made,” he said. “It’s just not what we had hoped for when we let the contract.”

Rissler said the marine demolition work on the sites was intentionally staggered with two separate contracts awarded at separate times.

Landside demolition progressed much more quickly. All buildings were removed from the 52 and 53 sites with the exception of a large barn left at 52 at the request of the Metropolis-Massac Port Authority, to which the property will be conveyed when all work is complete, according to the provisions of the Water Resources Development Act of 2020.

“Once our marine demo contractor completes his work, then we’ll be able to hand that over to them,” Rissler said.

The port authority has been in existence since 2009, although it has not had any tangible assets. With the acquisition of the former Lock and Dam 52 property, the port authority will own 19.1 acres, with approximately 1,800 feet of river frontage. Previously, board members said they would like to enter into a partnership with a port operator to expand regional development at the site, believing the Illinois property could serve as an excellent satellite facility for those operating across the river in or near Paducah, Ky.

Caption for photo: A blast from underwater demolition takes places November 19, 2021, at the former Ohio River Lock and Dam 53. Landside demolition at the former locks and dams 52 in Brookport, Ill., and 53 in Olmsted, Ill., was completed in 2021. The marine demolition at both projects is expected to be completed by the end of 2022. (Photo courtesy of Louisville Engineer District)